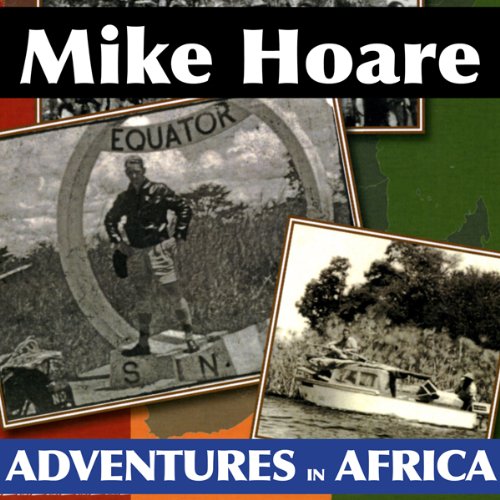 Go with Mike on foot accros Basutoland; by motorbike from Cape Town to Cairo; to sea in a 36-foot ketch; into the Kalahari desert - and more. In the final chapter he describes how he and his wife move to an Edenic island in the Okovanga delta, and the terrible and wonderful events that took place there.

"This is a man with 'Adventure' as his middle name. The book captivated me from the start.... Mike writes in a galloping, eye-witness-type style with flashes of droll humour." (Journalist Niki Moore)

What listeners say about Mike Hoare's Adventures in Africa

A Different Aspect of a Full Life

I read Mike Hoare's book, "Congo Mercenary" as a teenager, "The Seychelles Affair" in my 20s and "The Road to Kalamata" in my 40s.

Unlike them, this book is not about the events that made Mike Hoare famous, but about his travels in Africa. He tells of death defying adventures sailing in the Indian Ocean, the Pole he met while hiking in Lesotho, motorcycle trips from South Africa to Europe and working with Richard Burton on the set of "The Wild Geese".

Most movingly, he tells of his desparate efforts to save his wife and two employees struck down with malaria in a remote part of Botswana.

Mike Hoare was a product of his time. His attitude to Africans sometimes comes across as paternalistic, but he acknowledges their knowledge, intelligence and compassion.

If you were to repeat these journeys today, some would be on modern roads that would leave you wondering what the fuss was about. Other journeys would no longer be possible, either because the roads and tracks have been reclaimed by nature or because of war and terrorism.

This is an Africa that no longer exists, but Mike Hoare's writing (and narration) bring it briefly back to life.

Filled with Outdated Stereotypes of Africans

Let me start by complimenting Hoare for writing about his adventures in Africa in the 1950s from a perspective that is rarely seen. Literature from that period in Africa that does not deal mainly with colonization/decolonization/cold war is relatively rare. So for Hoare to take the time to write simply about one man's travels across the continent is indeed quite a gem and a rare accomplishment.

I grew up in Africa reading about Hoare and his exploits, and indeed quite idolized the man. I recently just found out that he also wrote books about his time in Africa, and I will read every single one of them, this one being the first.

Yet I must confess that after reading this book I have been quite disappointed in the man/legend.

First of all, no one with a half a decent education after about 1930 still refers to black children as "pickanninies" anymore, something Mr. Hoare does several times in this book. Either the man or his publishers/editors are completely ignorant or are living in a past that exists only in their own minds.

In an effort to appeal to European readers, or perhaps due to some form ignorance, Mr. Hoare has taken outdated and archaic approach in dealing with Africa by emphasizing highly negative stereotypes of Africans as uncivilized savages who dallied in cannibalism and extreme brutality, and who needed saving by glorious and merciful Europeans.

Even when Hoare talks of slavery and the colonial brutality of Belgian Congo, the only savagery and brutality he discusses are those carried out by the Arabs and Africans, with hardly any mention of the role of the Europeans. Unbelievably, even when Belgian troops invade a village of a Congolese chief, kill him, massacre his people and seize his land, Hoare actually tries to justify it by stating that the Belgians were simply acting in self-defense because the Congolese appeared hostile after suddenly seeing 150 armed Belgian troops show up in their village demanding that they sign over their land to them as a protectorate. I wonder how Hoare or the Irish would have reacted if armed Congolese had suddenly shown up in Dublin and demanded that Ireland to be signed over to them to be made a protectorate. Even more unbelievably, although Hoare had just fought in WW2, a mainly European war that was the most brutal and barbaric event in all of human history, he relishes in displaying the "barbarity of Africans," in this book. Go figure.

Hoare even goes as far as trying to insinuate that black Africans had no civilizations or physical achievements (buildings) other than the walls of Great Zimbabwe (which he immediately went on to trivialize) prior to European arrival. For someone who is supposedly well-educated and traveled, it baffles me that he has never heard or read of Nubia, Kush, Axum, Kanem-Bornu Empire, Dejenne, Roha, Mali Empire, Kingdom of Benin, Timnuktu, Nok culture etc.

That said, I will read of rest of Hoare's books because they are a great source material, and he is a far better writer than many acclaimed writers today, Quite frankly, if you can get past his subtle bigotry, you will really enjoy this book. I am just really disappointed that while the man may have loved the African continent, he was completely out of touch with its people and has absolutely little or no understanding of the bigger picture, broader culture or context, other than the narrow-minded somewhat ignorant view of how Africa appeared in his own mind.

This was another account of some of the events in the life a real adventurer and all around character. Unlike the other books written by this author that recount his exploits as a mercenary leader and soldier, this book focuses on some of the author's other adventures on the Dark Continent.

Mike Hoare is an interesting man and has a dry sense of humor that really comes through in the narration. Audio is really the way to experience this book, and I like the fact that the author himself is the narrator.

A spectacular exploration of Mike's life outside of mercenary work in Africa. I highly recommend