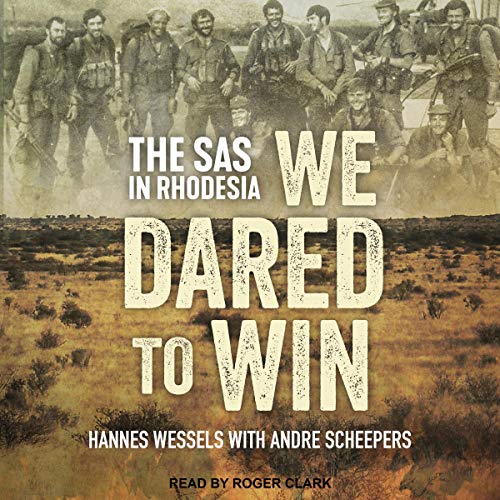 We Dared to Win

By: Hannes Wessels,Andre Scheepers - with
Narrated by: Roger Clark
Try for £0.00

Andre Scheepers grew up on a farm in Rhodesia, learning about the bush from his African childhood friends, before joining the army. A quiet, introspective thinker, Andre started out as a trooper in the SAS before being commissioned into the Rhodesian Light Infantry Commandos, where he was engaged in fireforce combat operations. He then rejoined the SAS.

Wounded 13 times, his operational record is exceptional even by the tough standards that existed at the time. He emerged as the SAS officer par excellence; beloved by his men, displaying extraordinary calmness, courage, and audacious cunning during a host of extremely dangerous operations. Andre writes vividly about his experiences, his emotions, and his state of mind during the war, and reflects candidly on what he learned and how war has shaped his life since.

In addition to Andre's personal story, this book reveals more about some of the other men who were distinguished operators in SAS operations during the Rhodesian War.

What listeners say about We Dared to Win

There are numerous books recounting the 20-year struggle of Rhodesians to maintain a strong, viable and progressive country despite everything the world threw at them yet there are only two audiobooks that I know of that recount the experiences of such brave men. Such a pity that this important account was ruined by narration so poor that it must have been contrived. with some hilarious mispronouncements of place names and military terms.

Wessels and Scheepers put a lot into their book, the least the publishers could have done is produce a narrator to give it the respect it deserves.

We dared to win

Good narrator great account of there operations, can be a little documentary style overall a good listen

The narrators pronunciation of local words and names is terrible. Some understanding of how to pronounce the names would have helped a lot. I enjoy Hannes Wessels books to read but this audio book was disappointing.

Ruined by the narrator.

The narrator gets the pronunciation of all the African, slang and town names wrong. Why an American for an African story AGAIN. It spoils a good story.

A fantastic story, all the more interesting as I knew some of the characters mentioned. The impact of the narrative sadly undermined by some terrible pronunciation.

The tragic story behind the story

Having grown up during this time period, it’s sad to reflect on the struggles of the people actually involved in trying to save a centuries old way of life and the stability it brought to Southern Africa. Although always portrayed as a battle between a “white racist” minority and a freedom seeking black majority, the truth is very tragic indeed. The book is well written, interesting and insightful. I am not South African nor do I speak Afrikaans so the narrator was fine to me. Without getting into the politics or ideology of the conflicts of Southern Africa I will ask this.........in the decades following the overthrow, and subsequent ouster of the establishment governments in central and Southern Africa, how have the average people fared? Tens of thousands of slaughtered innocents, rampant poverty, sickness, and starvation at the hands of power mad despots seems to be the order of the day.

Just as gripping as the first book!!

I am blown away at the incredible accomplishments of these guys! I’m also made sick at how England sold out Rhodesia!! Thanks for this books!

Great tail of what is to come!

Great book and we'll worth listening to. I hate to think we will have more stories of this before things improve.

Good war stories but not a lot of other context. If you’re interested in learning about the war in Africa you’ll want a different book.

Didnt care for the mans voice, but by the end I got use to it.

This book appears to give a very accurate and detailed account of the hardships, incredible bravery and professionalism of the SAS during the Rhodesian war.
As a South African, one is used to hearing foreigners mid-pronounce Afrikaans names. This is understandable but one would have thought in a book such as this, with many Afrikaner participants in the war, the publishers would have taken the trouble to address this issue. I found myself cringing repeatedly as the Afrikaans names were hideously destroyed.
Aside from the Afrikaans mis-pronunciations, would anyone with any insight into military matters refer to a casevac as a case-vac.
Presumably, Jack Chekijian narrates books in English for a living. He refers to Salisbury as Sal-is-bury?
This disappointment comes immediately after listening to Hannes Wessels equally good book: We Dared to Win which was also destroyed by the narrator, Roger Clark. Feeling confident that the change of narrator had resolved that pronunciation problem I purchased the second book. What a mistake!
I just can’t believe that the publishers damaged both Hannes Wessels works in this way.

The most unbelievably jarring pronunciation of not only possibly unfamiliar Pronouns but surely one should be spared mispronounced Anglo-Saxon words—too many to actually mention. “ Salisbury” and “Kissinger” are surely well known but were mangled in a single sentence. Very jarring to the ear

I just wish Andre and Hannes or a Rhodie/Saffa had told this story. The narrator has some dire pronunciations of southern African words which really ruin a great story. Sal-is-bury, Kuus, Willem Rat, Case-Vac, Queue Queue amongst way too many others...

Enjoyed this follow up to the original, although it tended to be a little chronologically sporadic. it was further spoiled by the narrator horrible mispronounciation of so many names and military terms.