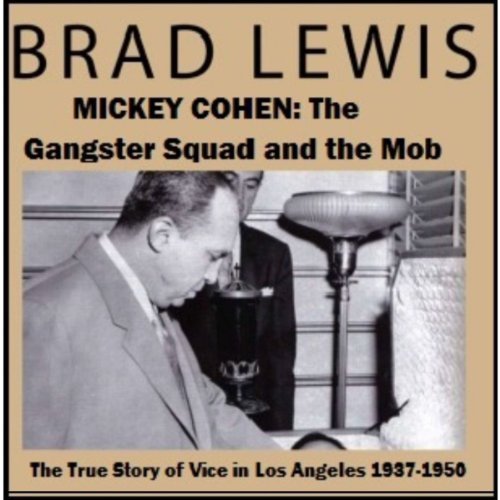 This is the true story of Mickey Cohen, when he was pursued on a daily basis by the Gangster Squad, LAPD, and the FBI. The whirlwind years 1937-1950 provide a detailed personal and mob history of the famous Los Angeles gangster.

Mickey Cohen, who died in 1976, was a colorful, feared West Coast gangster-gambler who knew the biggest names in Hollywood including the Rat Pack, was a confidant of Bugsy Siegel, a friend of Las Vegas' late Liz Renay and on first names with the biggest guys in the Mafia, plus Frank Sinatra, Richard Nixon, and Billy Graham. Brad Lewis' book about Cohen draws from thousands of resources - a virtual treasure trove of Mafia-related books, articles, and interviews. Written by a tough and knowledgeable insider, Lewis tells the whole Mickey Cohen story with this biography. All the whispered anecdotes, the news items and the underside of the crime rackets where Mickey operated are in this book, open to scrutiny. From Bugsy Siegel to Lucky Luciano and Albert Anastasia to Meyer Lansky and Carlos Marcello, Mickey knew them well and worked closely with them for many years. This is Mickey Cohen! Inside and Out! This is an abridged version of Hollywood's Celebrity Gangster, the only modern biography of Mickey Cohen.

What listeners say about Mickey Cohen

What did you love best about Mickey Cohen?

When I was offered the opportunity to narrate Mickey Cohen, I jumped the chance. I had already recorded THE BLOOMINGDALE CODE for writer, Brad Lewis, and knew that this book, like his previous works, would be overflowing with fascinating and little known facts about the wild and wooly Los Angeles of the 1930's up to 1950. Strange alliances developed between organized crime, police, politicos, business owners, and movie moguls; many of whom stole from each other by day, and supped amicably together by night. Right front and center was Boss man Mickey Cohen....dapper, well turned out, always striving for refinement and scratching to gain acceptance by the very folks he had no compunction about robbing or stabbing when backs were turned. If Cohen's story were a complete work of fiction some would scream to high heaven, calling it a big lie. But, the letters, memos, commentaries, eyewitness accounts, and photos snapped at auspicious or inauspicious moments tell much of the story. And Brad Lewis weaves it deftly together. As a narrator, I particularly enjoyed the open letter Mickey circulated amongst his Brentwood neighbors declaring the he would stay there right through whatever shootings and bombings were yet to come. The bad people would not cow him, and he expected his neighbors with high integrity not push him out of house and home and to take a stand against these "fiends."Listen to the book and you will never see Los Angeles the same way again. I know that I don't!John C. Zak

I laughed often at the sheer brashness of some of these characters. Sometimes I even felt a twinge of poignancy for Mickey and his world of self delusion, sort of like Eva Peron..completely self serving but seemingly inwardly believing that they were doing good on a grand scale.

You will be smarter about hidden Los Angeles after you listen to this book and you will have a new repertoire of anecdotes to toss out at drinks parties, pachinko parlors, and when you find yourself seated next to Prince So and So on an 18 hour long haul flight, after you have already sat though three replays of Free Willy in dubbed in Farsi.