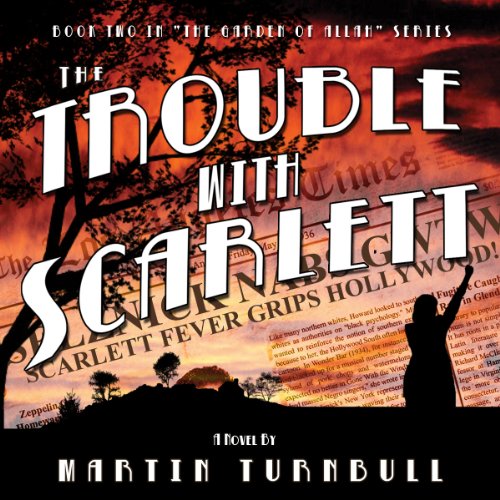 The Trouble with Scarlett

Summer, 1936: Gone with the Wind, Margaret Mitchell's first novel, takes the world by storm. Everyone in Hollywood knows Civil War pictures don't make a dime, but renegade producer David O. Selznick snaps up the movie rights and suddenly America has just one question: Who will play Scarlett O'Hara?

When Gwendolyn Brick gets her hands on the book, the clouds part and the angels sing the Hallelujah Chorus. Only a real Southern belle can play Scarlett - and didn't her mama raise her on stories of Sherman's march and those damned Yankees? She's going to have to stand out bigger than a hoop skirt at a Twelve Oaks barbeque to win that role.

Marcus Adler is the golden boy of Cosmopolitan Pictures, the studio William Randolph Hearst started for his mistress, Marion Davies. When Marcus' screenplay becomes Davies' first hit, he's invited to Hearst Castle for the weekend. The kid who was kicked out of Pennsylvania gets to rub shoulders with Myrna Loy, Winston Churchill, and Katharine Hepburn - but when the trip turns fiasco, he starts sinking fast. He needs a new story, real big and real soon.

When Selznick asks George Cukor to direct Gone with the Wind, it's the scoop of the year for Kathryn Massey, the Hollywood Reporter's newest columnist. But dare she publish it?

The Trouble with Scarlett is the second in Martin Turnbull's series of historical novels set during Hollywood's golden age.

What listeners say about The Trouble with Scarlett

Had high hopes for this, but I had to stop listening about halfway through. Between John C. Zak's wooden narration and Turnbull's often awkward writing, it just didn't work for me.

What was most disappointing about Martin Turnbull’s story?

The writing is often awkward; Turnbull uses strange metaphors and passive verb forms too often. Factual errors were also a problem. For instance, one character went to a end of Prohibition party with Errol Flynn. But Prohibition ended in 1933 and Flynn didn't come to Hollywood until 1934. Makes me wonder if this book was edited at all.

What character would you cut from The Trouble with Scarlett?

What made the experience of listening to The Trouble with Scarlett the most enjoyable?

I liked the way the author incorporates the characters into the making of the movie.

The scene in the restaurant with Louella.

Have you listened to any of John C. Zak’s other performances before? How does this one compare?

If you could take any character from The Trouble with Scarlett out to dinner, who would it be and why?

Catherine, I think she has the most substance, and would be an interesting conversationalist.

Excellent trilogy. The author is my new favorite. The narrator deserves awards. I can't wait to start the final book in about three minutes.