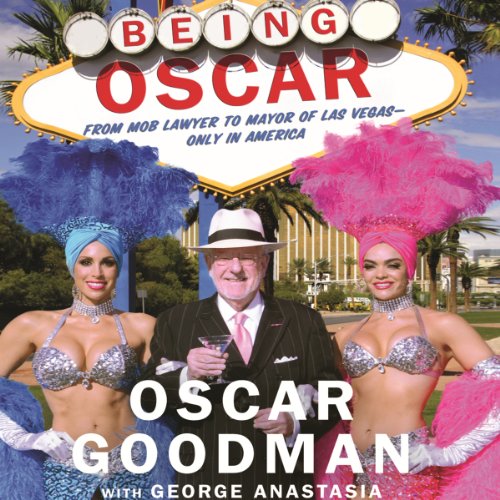 In Being Oscar, one of America's most celebrated criminal defense attorneys recounts the stories and cases of his epic life. The Mafia's go-to defender, he has tried an estimated 300 criminal cases, and won most of them. Goodman's roster of clients reads like a history of organized crime: Meyer Lansky, Nicky Scarfo, and "Lefty" Rosenthal, as well as Mike Tyson and boxing promoter Don King, along with a midget, a dentist, and a federal judge.

After 35 years as a defender, Goodman ran for mayor of Las Vegas, and America's greatest Mob lawyer became the mayor of its sexiest city. He was so popular his image appeared on the $5, $25, and $100 chips. While mayor of Vegas, Goodman starred on the big screen in Rush Hour 2 and on TV in CSI. He is as large a character in the history of organized crime as any of his clients and as legendary a figure in the history of Las Vegas as the entrepreneurs (his friends and clients) who built the city. This is his astonishing story - the truth, the whole truth, and nothing but the truth.

Not as good as I expected

This book is moderately interesting, but I got bored with it and returned it. After a while all the stories pretty much sounded the same, and his voice isn't the easiest to listen to after a while.

Goodman's narration was like that of a kid reading aloud from an assigned book in English class. Phrasing and emphasis were largely random.

it always fascinates me hearing the stories of mob lawyers. these are amazingly talented guys. an inspiration to young lawyers like me

Oscar is my hero

I am native to LV and I remember Oscar as the 2nd best mayor in LV history. (1st being Carolyn). this book is true to the attitude of Vegas and so is Oscar. I would recommend this to anyone who wants some insight into why many of us say that mob-run Vegas was safer and better than government run Vegas. of you're. a local you'll be surprised by how much Oscar really did for LV but o can assure you no one else has done so much.

Found Stories to be good... Reader, not so good

What did you love best about Being Oscar?

All the stories and interaction he had with most of the mob individuals.

What other book might you compare Being Oscar to and why?

None come to mind at this time...

Had someone else read the book. His stories are interesting but his reading takes away from the story some.

No, listen to while driving back and forth to work

If you could sum up Being Oscar in three words, what would they be?

I never heard of this guy before, but what an amazing life he has had! What's the audio equivalent of a page-turner? Whatever that is, this book is.