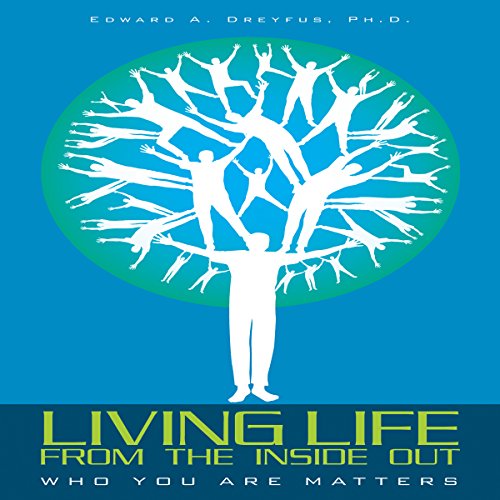 Living Life from the Inside Out

Who You Are Matters
By: Edward A. Dreyfus PhD
Narrated by: George Napier
Length: 3 hrs and 33 mins
Categories: Health & Personal Development, General

Living Life from the Inside Out

By: Edward A. Dreyfus PhD
Narrated by: George Napier

The Great Recession of 2008 left hundreds of thousands feeling lost and insecure; a similar but much bigger event occurred in 1929. When such events occur, we could fall into despair or perhaps it could be the time to re-evaluate what we really want out of life. What is most important to you? Most of you would say that you'd like to be better, happier people.

In their pursuit of happiness people have defined themselves by their careers, their money, their possessions. They have acted as though their self-esteem, their self-worth, could be bought. Material acquisition became a way of life. Bigger and more is better. And then in a nanosecond it all can disappear. Wealth vanishes, careers and jobs are wiped out. Then what?

This paradigm could be referred to as living life outside in. Defining oneself by stuff that lies outside of our control, by how things appear on the outside, as though happiness and self-worth can be bought, is living outside in.

This book focuses on a different paradigm: living inside out. Rather than defining oneself by titles, wealth, possessions, acquisitions, and other things, this model requires a look inside of ourselves to discover who we really are. It creates an empowering model that places individuals in control of their life, their personal value, and their happiness, rather than placing external circumstances in control of how we feel about ourselves. Religious thinkers, philosophers, secular humanists have for centuries argued that the pursuit of the "golden calf" will not provide ultimate happiness.