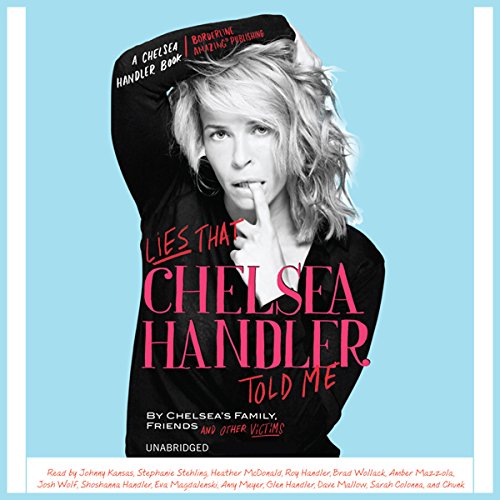 Lies That Chelsea Handler Told Me

"My tendency to make up stories and lie compulsively for the sake of my own amusement takes up a good portion of my day and provides me with a peace of mind not easily attainable in this economic climate."
—Chelsea Handler, from Chapter 10 of Chelsea Chelsea Bang Bang

It's no lie: Chelsea Handler loves to smoke out "dumbassness", the condition people suffer from that allows them to fall prey to her brand of complete and utter nonsense. Friends, family, co-workers - they've all been tricked by Chelsea into believing stories of total foolishness and into behaving like total fools. Luckily, they've lived to tell the tales and, for the very first time, write about them.

What listeners say about Lies That Chelsea Handler Told Me

Would you listen to Lies That Chelsea Handler Told Me again? Why?

I listened to this without first reading other reviews, because Chelsea Handler makes me laugh on a nightly basis. Now reading them, I don't understand other reviewers saying, "I love her, but reading this makes me realize that she's cruel/immature/mean..." Have you never seen her?

I think most people don't have friendships that are so obnoxiously immature on the outside. I think that's why they don't "get it." My core group of friends/family say and do crazy things to each other constantly in order to get a laugh. If you sat in a room with my best friend and I, you'd think we hated each other by the way we talk sometimes. However, the people in my world would do ANYTHING for me, and I for them. There isn't one person in this book that doesn't say that very thing about her.

If you don't get why people do obnoxious things to their friends, this book isn't for you... but then again, I don't know why you'd read it in the first place. If you can watch Chelsea Handler's show and not get that she's obnoxious and bitchy, you're missing something. This book answers the question, "I wonder how bitchy she really can be," answer being, "A LOT." It's college frat boy humor... she's a jackass boy with breasts.

I thought this book was funnier than VODKA... I actually didn't like that one at all. Having said that, I didn't think every narrator was great, but I did like hearing each voice separately. I do think that Chelsea Handler should have narrated her own part. Hearing other voices, especially those you "know" (Heather McDonald, Josh Wolf, Roy Handler) makes it weird when someone is else is reading her part. There are also musical transitions separating each chapter that I thought were weird and out of place.

First off let me say I am (or rather was) a huge Chelsea fan! When she is on her A game she is possibly the funniest woman alive. Her previous 3 books have had me laughing out loud and sharing them with all my girlfriends.
This book however is simply a sad attempt at a money grab. It appears as though Chelsea had nothing to do with this book, yet has shamelessly plastered her name and image all over it. Granted the stories are about her (for the most part) but are written by others poorly attempting to emulate her style. Its truly terrible and they should all be ashamed. *Spoiler Alert* One chapter is ‘written by’ Chunk… Yes Chunk. Her dog. Need I say more?
I have never been more annoyed over the complete waste of a credit! I warn you, if you are hoping for classic Chelsea, skip this and just re-enjoy one of her old books.

I got this after literally rolling on the floor listening to "Vodka, it's Chelsea." While this was kinda of funny, it just wasn't as good. Could be cause it is based entirely on pranks she pulls rather than her self-deprecating humor that was so funny.

Love all of Chelsea's books. But this one sucks.

It's weird bc I'm such a fan of Chelsea, but her friends are a tad annoying in this book. For example, it seems like they've all listened to her self-read audiobooks & sort of emulated her performance style. badly.

also....and maybe it's just me....but are all of these people super super stupid? if chelsea is such a known prankster, wouldn't most of these pranks have been visible from space? Once guy is duped into leaving his honeymoon early b/c he was told that TIME Magazine was putting the writing staff of Chelsea Lately on the COVER. Reeeeeally? Seriously? I mean, I know that Time Magazine does actually dumb down the American version of its publication by making it more pop culture skewed ((that's actually true...the rest of the world gets another version of the magazine....wtf)) but, seriously.....i don't think i need to continue. You get it. It's OBVIOUSLY a prank. Jeez.

so many other examples....and none really that funny, except probably to the people involved.

Oof. Wait for Uganda to Be Kidding Me to come out on audible.

The energy from some of the narrators was a little dead. It felt as if they had been reading for hours, and they were at the very end and restless.

Has Lies That Chelsea Handler Told Me turned you off from other books in this genre?

No. I think I'll just have to pay more attention to the reviews before i purchase.

I like that the stories were told by the people who wrote it, and by the people the events happened to. It was nice that they were able to mimic the sounds of surprise or the accents spoken. The pauses were accurate and done in a way that I would not have been able to imagine reading on my own.

See above for dislikes.

The book was entertaining. It made me giggle on the inside often. It was just evident that none of these people are used to writing in book format. It was so poorly written, that even the decent performances couldn't save it. It was entertaining and worth a listen if it is free.

What made the experience of listening to Lies That Chelsea Handler Told Me the most enjoyable?

The characters in all of Handler's previous books finally become real and take the reins in this book.

Chelsea graciously replies to each story with her own rebuttal in the only way she knows how: delightfully insulting.

Chelsea is able to bring those around her into her schemes to make them more realistic. She convinces can take somebody's weakness and exploit it to the brink of destruction. She had an OCD colleague convinced that her employee was becoming her adoptive son, living with her, going on vacations with her, not paying rent... but it was never true. This wouldn't bother most people, but Chelsea knew an OCD wouldn't be able to take it. Brilliant.

Everything. I'd love to be Chelsea's friend.

I loved 'Vodka' and I have to compare the laugh-out-loud humor of that book to this one, which offers just a few smiles. And these aren't worth wading through all the cruel pranks that are reported with no real explanation of why these people are Chelsea's 'friends' except that they're on the payroll. I tried hard to like this, but my mood and morale were deteriorating from all the pointless profanity, slimy images, and unchallenging, childish humor.

Captivating and funny for any Chelsea Handler fan. And if you aren’t one- you should be!

Love everything Chelsea! I would recommend any, and all of her books. Another good one.

I Love Chelsea Handler, but this was probably the worst book of hers. I was really disappointed. I struggled to keep interested