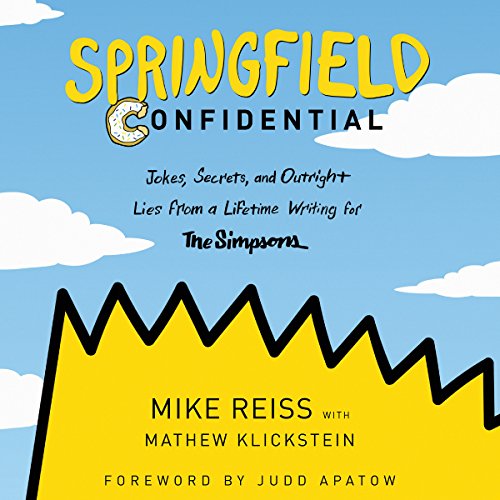 In celebration of The Simpsons 30th anniversary, the show’s longest-serving writer and producer offers a humorous look at the writing and making of the legendary Fox series that has become one of the most revered artistic achievements in television history.

Four-time Emmy winner Mike Reiss - who has worked on The Simpsons continuously since episode one in 1989 - shares stories, scandals, and gossip about working with America’s most iconic cartoon family ever. Reiss explains how the episodes are created and provides an inside look at the show’s writers, animators, actors, and celebrity guests. He answers a range of questions from Simpsons fans and die-hards and reminisces about the making of perennially favorite episodes.

In his freewheeling, irreverent comic style, Reiss reflects on his lifetime inside The Simpsons - a personal highlights reel of his achievements, observations, and favorite stories. Springfield Confidential exposes why Matt Groening decided to make all of the characters yellow; dishes on what it’s like to be crammed in a room full of funny writers 60 hours a week; and tells what Reiss learned after traveling to 71 countries where The Simpsons is watched (ironic note: there’s no electricity in many of these places); and even reveals where Springfield is located! He features unique interviews with Judd Apatow, who also provided the foreword, and Conan O'Brien, as well as with Simpsons legends Al Jean, Nancy Cartwright, Dan Castellaneta, and more.

Like Cary Elwes’ As You Wish, Jennifer Keishin Armstrong’s Seinfeldia, and Chris Smith’s The Daily Show: An Oral History, Springfield Confidential is a funny, informational, and exclusive look at one of the most beloved programs in all of television land.

Suckiest book that ever sucked

This book was awful. I was hoping for a behind the scenes look at the Simpsons and instead it's mainly Mike Reiss retelling terrible unfunny jokes he made in a pile of other shows and movies. The Simpsons stuff he does talk about is hardly eye-opening. He comes across as patronising and full of himself, and the contributions he made to the actual good seasons of the Simpsons seem to be minimal. I found myself cringing repeatedly. Much of the book is "I made this joke in this episode or kids movie" and he then proceeds to re-enact the entire joke barely being able to contain his own laughter. I wouldn't mind if the jokes were actually good. Then there's testimonial after testimonial from famous people about how great and funny the guy is. It's just awful. What a waste of an audible credit. If this book gets translated into a language you don't understand download that instead - it'll be funnier.

A good listen but not fully about Simpsons. This is an autobiography of the author/narrator.

How Can a Book About The Simspons Not Be Good?

Must read for Simpsons fans. Seriously, you must or I'll release the hounds. Great stories about the creation of The Simpsons, the people who make the characters, special guests, episodes that did not make it to air, and everything else you can think of.

Must Read for Simpsons fans

Loved getting an in depth look at what makes the Simpsons the king of sitcoms for the last 30 seasons.

Refreshing way of learning how comedy is structured and performed for the show.

Offers a great inside look at what it has taken to make The Simpsons so good for so long.
I do think it was a mistake having the author also do the narration. This guy can't deliver a line and
has a really annoying way of speaking. Not all good writers are also good performers.
Also, it's sort of weird having the author reading solicited praise for himself from his peers. Not really needed.

If you enjoy a solid dad joke about every 2 minutes, then this is the book for you. The author enthusiastically delivers every joke, pun, & one liner with such pride, you can't help but chuckle at even the most cringe worthy jokes (which is almost all of them).

Also there was some stuff about the history of the Simpsons or something.

I really enjoyed listening to this. the Simpsons stuff was great, and all the stuff about this guy's life was brilliant too.

Although I am a huge Simpsons fan, I thoroughly enjoyed the stories that involved other aspects of the world of humorous writing and the various medias.

Story was arrogant and the delivery was terrible..

While this is marketed as a Simpsons book, it's really a history in the career of Mike Reiss. While he does talk about The Simpsons the majority of the time, I quite frankly don't care which countries he hates or other TV Shows/Movies he loves.

Even the dive into The Simpsons was shallow and didn't really tell us anything new we couldn't get from listen to the commentaries. If you're looking for a Simpsons book that dives into the true history/legacy, I recommend, "The Simpsons
An Uncensored, Unauthorized History".

Author shares a lot of fascinating behind the scenes stories and hilarious anecdotes. He reads the book himself and its a blast to listen to.

Also unlike many other books about comedy or sitcoms, this one is actually funny.

Just listen to it and enjoy =)

Interesting well beyond the show

My husband and I speak “Simpsons” to each other. But we’re nowhere near the diehard fans I learned about in the book. Thanks Mike Reiss, both for the show and for the story. I’ve always appreciated the show- now even more.
And to Mr. Reiss: I loved the Critic- it was so funny I can still hear the characters so many years later. And in my family the Simpsons is still a treat. Thank you for bringing so much funny into the world. God knows we need it!