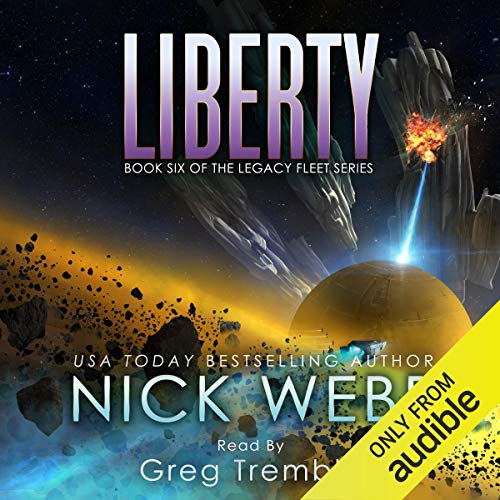 By: Nick Webb
Narrated by: Greg Tremblay
Try for £0.00

It rages across United Earth space, claiming millions of lives. The Swarm have returned, larger, more fierce, and more technologically advanced than ever before.

The voice from Saturn's moon Titan claiming to be Tim Granger is warning humanity that this time, the Swarm may be unstoppable.

Admiral Shelby Proctor, on the run for the suspected murder of the United Earth President, knows that humanity's only hope may be a hero that's been dead for 30 years, and travels to the center of Titan to find him in Earth's darkest hour.

The fleets are assembled, all the races united against the overwhelming enemy from another universe. And now all they need a legendary hero to lead them to victory.

What listeners say about Liberty

Started listening to this series and became engrossed. A real sci-fi that feels grand, grounded and mind boggling all at once. If you've made it this far in the series you already love it. PS Please Mr Webb I would love to see the next book in the saga but can't even find a possible release date

This had been a great SiFi series. very well written and narrated. please continue, this series has places to go. Thank you for great listening.

A fantastic end to the series
Hope to find the next noval from this arced storyline if there is one.

I have enjoyed Nick Webb Books.
So having the write voice to tell the story will inanes the story.
looking forward to the nest book.

I've listened to all 6 books over 2 weeks, I was tipped off about this series by another review on a book I nearly bought saying this series was better. The other reviewer was right this series is well worth the listen and I look forward to listening to in again in the not to distant future.

One tip, I like books to go to sleep to, I lay in bed 5 hours the one night listening to one of these books but the story was so good I couldn't go to sleep! Also note that I knew the book was keeping me awake after the first hour and a half but it took me three and a half hours to bring my self to turn it off! I will have to go and get the authors other books now and hope that they are just as good.

Superb book, best yet in the series... Nick Webb hit a new level with this one, can't wait to hear more!
The legacy fleet saga is tremendous, and this book was a near perfect addition.
Sci-fi at its best!

A exciting end to a fantastic trilogy. Can not wait for the next series. Definitely going to listen to more Nick Webb audio books.

I have read/listened to the whole legacy fleet series and wow they are well written.

but don't take my word for it listen for yourself.

Fantastic story loved all the legacy fleet audio books so far.. Really good story and great voice work for the characters.. Thank you so much for the excellent work.. 5 stars. 😀😁👍

Exciting and never ending not how you'd expect

I enjoyed the book better than I'd expect the story line was great enjoy it.

I am addicted to the story line and the personalities/voices of the characters. So much so that each time I buy the next book in the series and start reading but then have to stop because the audiobook adds so much more. I lose my self 8n the story, like I'm right there in the cockpit with Balsy or Civic or one of the other crew members!!

I listened to the first 4 books of this series and really enjoyed it. Skipped book 5 due to the reviews, thought I would check out book 6. Wow. Just wow. Could not be more different compared to the first four books. Simply not worth listening to.

One of my Favourite Sci-Fi Series of All Time!!

The first two books of this series were the first I listened to when I got my membership long ago. Always kept thinking about the story... thinking of coming back to it - never did. Decided to listen to the books again and glad I did! I couldn't stop listening. This series is so Good!

This series is better, or as good, as any other same genre series on audibles!

I hope Webb puts the next few on audibles as well. I'm finding a trend were great authors are not continuing series on Audibles, Maybe this trend will drive competition and drive %'s so it's worth it to the authors again?

how many times can I listen to these books?... at. least a few dozen more.

The 6th book didnt disappoint. The dialog was a little cheesy but easy to follow and very enjoyable. Great story and with great characters. The narrator Greg Tremblay was outstanding. Looking forward to the rest of the series.

The story the characters are so good, entertaining and exhilarating!
What a great author and the narrator is beyond great!

loved it all of them!
funny, a lot of action, a lot of sadness great balance.