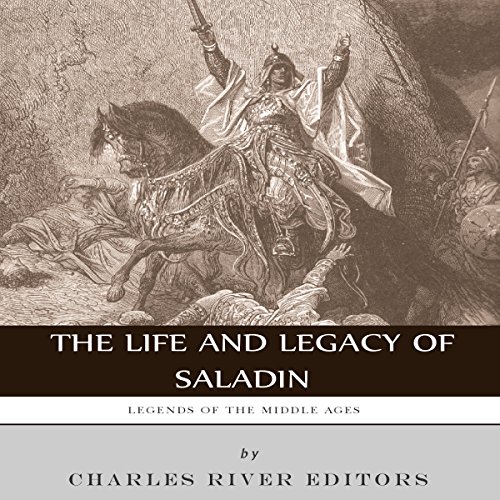 Legends of the Middle Ages: The Life and Legacy of Saladin

Legends of the Middle Ages: The Life and Legacy of Saladin

"It is equally true that his generosity, his piety, devoid of fanaticism, that flower of liberality and courtesy which had been the model of our old chroniclers, won him no less popularity in Frankish Syria than in the lands of Islam." (René Grousset)

A lot of ink has been spilled covering the lives of history's most influential figures, but how much of the forest is lost for the trees? In Charles River Editors' Legends of the Middle Ages series, listeners can get caught up to speed on the lives of important medieval men and women in the time it takes to finish a commute, while learning interesting facts long forgotten or never known.

During a trip to Damascus, Syria, in 1958, Egyptian President Gamal Abdel Nasser visited the tomb of Saladin. It was a symbolic visit for the pan-Arab leader, who sought to unite the Arab world and restore it to its past glory. For nationalists like Nasser and devout Muslims across the Middle East, Saladin's life and reign represent the pinnacle of that glory, more than eight centuries after his death.

Saladin is widely considered one of the greatest generals in history and one of the most famous leaders of the Middle Ages, but he remains a paradox, both in personal and in historical terms. A military genius, he first served other generals and was overshadowed later in life by his greatest rival, Richard I of England. He was far more admired by his Christian enemies, who extolled his chivalry, than some of his Muslim rivals, who fought him for control of Egypt and Syria in the 12th century. His Christian enemies continued his name long after it was forgotten in the Middle East, only to spark a revival of his reputation in Arab culture in the 20th century.

very
poor book lacking detail and substance. would not recommend. very disappointed with this purchase.

very informative and eye opening, I look forward to reading more on this great leader.

The narrator needs to go back to school

What would have made Legends of the Middle Ages: The Life and Legacy of Saladin better?

Regardless of the text, the narrator barely achieves high school level reading. An auditory challenge, not an intellectual one.

Would you recommend Legends of the Middle Ages: The Life and Legacy of Saladin to your friends? Why or why not?

Probably in the written format

If performance means reading, it probably will get passing grade at high school level, but that is about it. I guess find a reader who is proficient in reading English Language.

This book is just the same content repurpose as Fighting the third crusade. Very dissatisfied