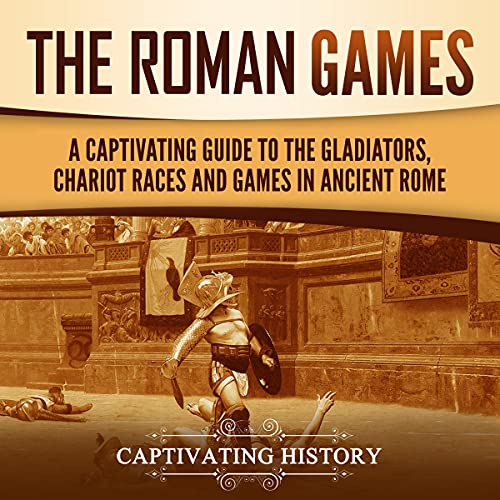 The Roman Games: A Captivating Guide to the Gladiators, Chariot Races, and Games in Ancient Rome

If you want to discover the history of the Roman Games, then pay attention...

What were the Roman games? What was it like for gladiators in the arenas of ancient Rome? How thrilling was it to see chariot races on the Roman race track? Were the condemned really thrown to lions at the Circus Maximus? These are a few of the questions that will be explored in this audiobook. The Romans were known for their extensive civilization, but at the heart of Roman power was a penchant for the Roman games. Immense money and resources were spent constructing circuses, stadiums, and amphitheaters, all in an effort to create incredible spectacles for the Roman masses.

It was said that as long as Roman citizens had “bread and circuses”, they would remain content. The Roman people became so absorbed in the Roman games, in fact, that many other vital aspects of Roman society began to deteriorate. This audiobook explores the nature of the Roman games and their relationship with Roman religion, as well as political and military power. Interestingly enough, it has been said that the games stemmed from religious and funeral rites that used spectacles to appease both the Roman gods and the spirits of the dead. The Roman games were held many centuries ago, yet they still captivate us today. Here in this audiobook, we will explore them in full.

Buy this audiobook to learn more about the Roman Games.

What listeners say about The Roman Games: A Captivating Guide to the Gladiators, Chariot Races, and Games in Ancient Rome