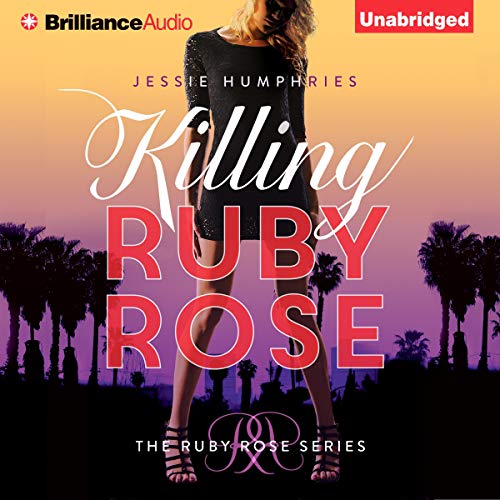 In sunny Southern California, 17-year-old Ruby Rose is known for her killer looks and her killer SAT scores. But ever since her dad, an LAPD SWAT sergeant, died, she’s also got a few killer secrets.

To cope, Ruby has been trying to stay focused on school (the top spot in her class is on the line) and spending time with friends (her Jimmy Choos and Manolo Blahniks are nothing if not loyal). But after six months of therapy and pathetic parenting by her mom, the District Attorney, Ruby decides to pick up where her dad left off and starts going after the bad guys herself.

When Ruby ends up killing a murderer to save his intended victim, she discovers that she’s gone from being the huntress to the hunted. There’s a sick mastermind at play, and he has Ruby in his sights. Ruby must discover who’s using her to implement twisted justice before she ends up swapping Valentino red for prison orange.

With a gun named Smith, a talent for martial arts, and a boyfriend with eyes to die for, Ruby is ready to face the worst. And if a girl’s forced to kill, won’t the guilt sit more easily in a pair of Prada peep-toe pumps?

Pretty Good: Even For Adults

I found this selection because of my daughter, but liked it pretty well. There is a great deal in this book about high school politics and way too much about women's shoes but it still plays. Ruby is an emotionally typical teen; sometimes thirty, sometimes ten. I was disappointed at the lack of time given to Ruby's supposed intellect and any workouts or self defense training in the book. There are some unlikely elements in this story but the writer is not only able to pull them off but fit them seamlessly into the narrative. Ruby's recklessness puts herself and those she cares about in peril and she doesn't seem to have second thoughts about it until afterwards when she beats herself up over it for awhile; then does it again. Rather than being incongruous this is reflective of an adolescent mindset. These weaknesses make it a four star for me but it is definitely worth the credit.

it was a good book. I got bored in a few spots but it was good.

What would have made Killing Ruby Rose better?

This was definitely a book I would have liked when I was 13 or 14. But the main character was not believable. She has 5 million dollars in life insurance, cares too much about shoes. She has perfect looks, perfect smarts, a very self-centered and shallow mother, and a new boyfriend who is perfect in every way. I wanted to throw-up. She was also very stupid for a "smart" girl.

She did a good job of sounding exactly like a teenage girl. Unfortunately, this teenage girl was irritating and that made the narrator be irritating. My poor review of the book stems from the content not the narration.

It wasn't the worst book I've ever read.

What could Jessie Humphries have done to make this a more enjoyable book for you?

The author started out with a good idea which rapidly deteriorated with the valley girl POV of a misanthropic teenage stalker turned vigilante assassin.

One of the Best I've Read in Awhile

Where does Killing Ruby Rose rank among all the audiobooks you’ve listened to so far?

This was one of the best books I've read in awhile. So unexpected and unpredictable. It is definitely outside of my usual go-to genre of reading but I am so happy I took a chance.

What does Kimberly Harsch bring to the story that you wouldn’t experience if you just read the book?

Absolutely great performance by Harsch. She didn't overdo it but her performance really enhanced the story rather than being a distraction.

All I can say, is that just when you think you have the story figured out, the book will prove you wrong. At one point I thought it was going to be the end of the book and I looked down noticing I still had 6 more hours!

I could tell from the blurb I would either love or hate Ruby Rose – there could be no inbetween with a so completely over-the-top premise.

And Ruby Rose was everything I should have hated – mopey, shoe-obsessed and far too willing to plunge headlong into danger under the guise of being tough, gutsy and independent...only to need to be recused from herself.

But somehow…I came to, if not really like her, at least not be annoyed to tears by her. And frankly, I consider that a quite a victory – Humphries shot sky-high with this one and the fact she didn’t fail horrifically is kind of amazing.

Okay, I’m not really selling this am I?

Bottom line: I know what I hate and I didn’t hate Killing Ruby Rose.

Yes, the plot jumps the tracks completely by the third act but I’ll be happy to continue with the series.

This is high praise from me, so I think most YA readers should be able to find something to enjoy here.