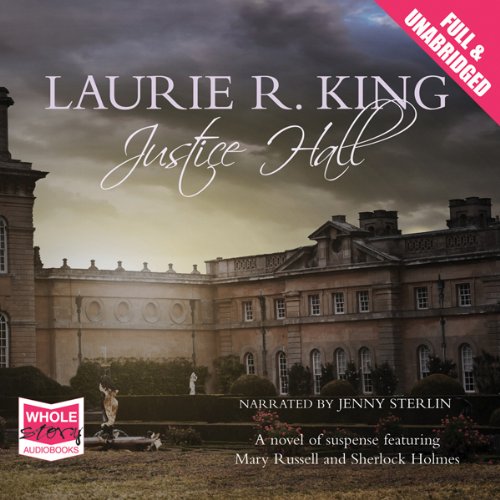 With her debut novel, A Grave Talent, Laurie R. King became the first novelist since Patricia Cornwell to win prizes for Best First Crime Novel on both sides of the Atlantic. Few authors dare to touch the classic canon of Sherlock Holmes mysteries, but in this charming and suspenseful series, Edgar award-winner King succeeds with triumphant originality. Mary Russell and her husband, Sherlock Holmes, are now on their sixth thrilling outing together.

What listeners say about Justice Hall

Recommended to anyone who actually likes series

Nearly didn't get this due to the previous reviews. Concluded they just didn't like the series in general. I really enjoyed this one and would recommend it - provided that you do like the series! Couldn't disagree more with other reviewers; didn't find the English upper class stuff anachronistic - it was after all set in 1924. I would, however, recommend it to be read/heard AFTER O Jerusalem (which I would in fact rate slightly lower than this one) because otherwise much of the premise of this story would be far less meaningful.

Well written but too long.

It's okay. The story itself is fine. It is mostly in England with a brief visit to France, the characters are well written - just longer than it needed to be in my opinion.

I have read and enjoyed three others in this series but couldn't finish this one. Never really got into the story as I found it so difficult to listen to. It's read as if it were poetry with emphasis and inflexion on almost every word.

Just didn't do it for me

Has Justice Hall put you off other books in this genre?

No - just books by this author

Would you listen to another book narrated by Jenny Sterlin?

I find the contrivance of a married Sherlock Homes and the stereo-typing of the British aristocracy rather difficult to swallow. If you want to know about like in the Middle East in the early part of the 20th century Freya Stark is a more credible source!