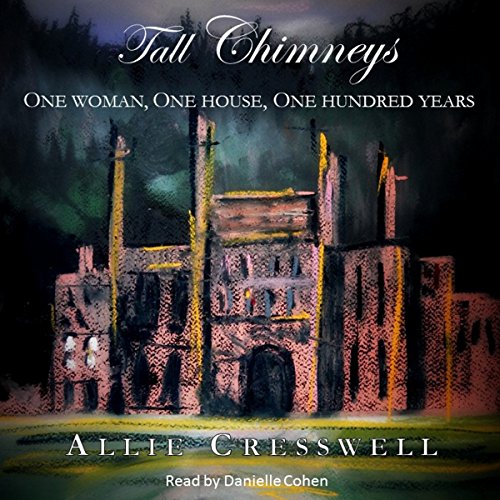 By: Allie Cresswell
Narrated by: Danielle Cohen
Try for £0.00

This British family saga has been awarded a silver medal in the prestigious Readers’ Favorite Book Awards.

Considered a troublesome burden, Evelyn Talbot is banished by her family to their remote country house in Yorkshire. Tall Chimneys is hidden in a damp and gloomy hollow. It is outmoded and inconvenient, but Evelyn is determined to save it from the fate of so many stately homes at the time - abandonment or demolition.

Occasional echoes of tumult in the wider world reach their sequestered backwater - the strident cries of political extremists, a furore of royal scandal, rumblings of the European war machine. But their isolated spot seems largely untouched.

At times life is hard - little more than survival. At times it feels enchanted, almost outside of time itself.

The woman and the house shore each other up - until love comes calling, threatening to pull them asunder. Her desertion will spell its demise, but saving Tall Chimneys could mean sacrificing her hope for happiness, even sacrificing herself.

A century later, a distant relative crosses the globe to find the house of his ancestors. What he finds in the strange depression of the moor could change the course of his life forever.

What listeners say about Tall Chimneys

This was a long laboured book. The descriptions and language used was tedious. The characters had no depth and historically was wrong (Leeds did not suffer serious bombing during WW2).
I doubt I will read anything by this author again

Thoroughly enjoyed listening to this book. It was well narrated and easy to lose yourself and get absorbed in the story. The main character is likeable and Tall Trees steals your heart. Looking forward to listening to more from Allie Creswell.

Disclaimer: "I was given this free review copy audiobook at my request and have voluntarily left this review."

Easy to listen to with a great plot

Tall Chimneys is a beautiful story that is easy to listen to. I thoroughly enjoyed it and found the plot enchanting. I could really imagine the scenes and found the historical references in the book fascinating along with learning how people lived in previous times. Simply put it was brilliant.

An incredible journey of life

I received this book a while ago and meant to review sooner but was very ill and am just now recovering.....

This book is a deep journey of life and love. It chronicles the ups and downs of the life of Evelyn who lives at Tall Chimneys for her whole life. It's not a "total feel good" story but rather a true to life tale of a life well lived. It makes you feel the emotions, challenges, and sorrows she felt and leaves you with the feeling that you knew Evelyn and Tall Chimneys. I recommend this to anyone who enjoys deep historical stories with heart.

My thanks to the author for providing me a review copy of this book at my request. I am voluntarily leaving my honest review.

A family saga with history in the background...

I have recently listened to and read a lot of fantasy, crime novels and historical romances, so when I got a chance to listen to Tall Chimneys I thought a change of genre would be good - and I was right:)

It's a slow book - but not in a negative sense at all... It's a book you taste bit by bit, chapter by chapter, as the story develops, as you delve into the life of the main character, as you discover how Fate plays with Evelyn's feelings and emotions...
When we meet her, she's a little kid, rather lonely and unloved. Then as a very young woman, she is left by her family at Tall Chimneys, the house that soon becomes her escape and her prison... We see her grow, experience love and fear, and despair, and joy; and we sense that invisible rope that holds her stuck in that one place in the world, not allowing her to move, to escape, to see something more - but we also sense that this is what her choice has always been...

The book is written in the form of memoirs, so we follow all the events through Evelyn - we see and understand and exerience them through her, through her emotions and feelings. And because she is a rather secluded person, closing herself to the outside world, all the historical events happening around her seem kind of unimportant, hazy, passing by, becoming only a small interlude in the daily routine... Surprisingly, that kind of narration makes the book much more interesting, relateable, emotional...and makes you keep listening:)

As for the narration by Ms Cohen, it's really good, although I did speed it up to 1.20 :) She interpretes all the characters very well; there are two or three instances when I feel she overacts a bit - but overall her reading adds to the experience a lot so those can be excused:)

This book is phenomenal.
It is about a very old country estate and a very young girl advancing through the years of the 20th century. The house has been in the Talbot family for over 300 years. None of the much older siblings want anything to do with the crumbling mansion. It is left to Evelyn to care for it and love it, often with very little money or support from her brothers. She becomes reclusive and fearful of the outside world. When the house is opened during the war years, she is required to let the world in.
Depravity and brutality as well as kindness and love all combine to form the young innocent girl into the strong woman she becomes.
This was a book I couldn't stop listening to and didn't want it to end.
The narrator, Danielle Cohen had the perfect voice for this story. Sweetness, desperation, fear and longing all came through in her voice.
I want to thank Allie Cresswell for allowing me to listen to this wonderful story.
"I was given this free review copy audiobook at my request and have voluntarily left this review."

Wow Wow Wow! Gotta listen to this one!!

What a wonderful book. Can a person love a house so much they would not leave it? Yes yes yes. But what happenings go on in this old mansion. Evelyn an orphan, and the baby of the family with many siblings. But in the early days only men can make the determine what happens to women. But times are changing. Evelyn does not own Tall Chimney's her brother does but he lets her stay their as long as she takes care of it and his parties when he stops by.

"This book
was given to me for free at my request and I provided this voluntary review.

An Unusual Story of Possession and Obsession

This book will transport you in a different time and world. Evelyn is born by mistake and brought up to find her own way in life with siblings so much older than her, and parents that were more inclined to look forward to a life with less responsibilities than to rearing a young child. The only constant in Evelyn's life is the house where she was born and that became such an intrinsic part of her adult life. It is a story of mental possession with her obsessive need to remain within its walls even when love and the right men could provide Evelyn's means of escape. That hold that the house has on her however, is stronger than any other feelings, any other desires, and she will give in to it, time and time again. The narrative is detailed and follows the troubled life of the youngest sibling in a family that has little in common. Evelyn is never the owner of the place, but she is the most attentive keeper, the one more emotionally attached to it. Her very unusual relationships result in difficult situations that draw her even more into herself and within the walls of Tall Chimneys. She a living ghost, afraid to stray too far away from the place she loves and hates. And that hold will not let go...
A wonderful tale, superbly narrated. Highly recommended.

This book is a journey of many happenings and heartache and sorrow and love i.it's slow going but moved into the story