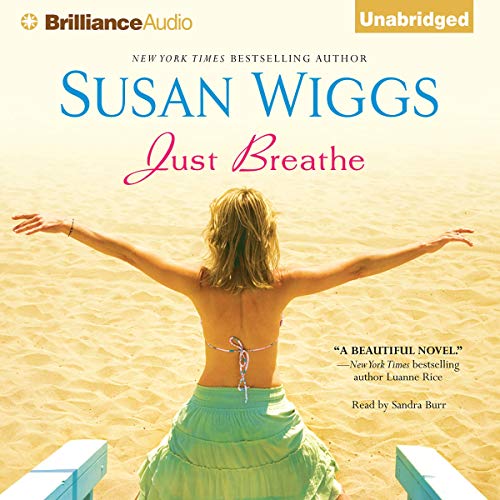 With Chicago - and her marriage - in the rearview mirror, she flees to the small Northern California coastal town where she grew up, a place she couldn't wait to leave. Now she finds herself revisiting the past - an emotionally distant father and the unanswered questions left by her mother's death.

As she comes to terms with her lost marriage, Sarah encounters a man she never expected to meet again: Will Bonner, the high-school heartthrob she'd skewered mercilessly in her old comics. Now a local firefighter, he's been through some changes himself. But just as her heart is about to reawaken, Sarah discovers she is pregnant - with her ex's twins.

It's hardly the most traditional of new beginnings, but who says life and love are predictable...or perfect? The winds of change have led Sarah here. Now all she can do is just close her eyes...and breathe.

"Wiggs takes serious situations and weaves them into an emotionally wrought story that will have readers reaching for the Kleenex one moment and snickering out loud the next." ( Publishers Weekly)

What listeners say about Just Breathe

Nothing to spend too much time on

This is basic brain candy, no surprises, not terribly funny, very predictable. It sounded a lot better in the description than it was to listen too. Unless you get this for a very reduced price there are better things on this site to spend time listening to.

couldn't finish this one... you'd think drama and tedium were mutually exclusive, but somehow this book managed too much of both.

Great!
Looking for a good story with a few laughs along with some real life? This one is it. Terrifically narrated, offering different voices for characters this is a wonderful listen.
Not anything like my own life or probably yours there is much of everyday relationships and living in this book put together with love, friendship, and humor.

The premise for the story was cute, the cartoonist part, but the rest could have been summed up in about 3 chapters.
I try not to criticize the readers, but this one made the men sound so much like robots I kept waiting for one of them to say "danger Will Robinson"! It was a bit of a distraction.
If you want a very, very light read, this is for you.

So unrealistic and awful. I had an very hard time getting through it. Books should be a joy not torture

I hated to stop listening at the end of my commute. I wanted to know what would happen next. Great book.

Just what I was hoping it would be I could not breathe in some moments.

Missed read book for moms and love story lovers. It's like the best movie as you listen to this story!!

I enjoyed her journey, the parenting issues,

and the small town life.

If I were reading this as a physical book, I might rate it lower, but as an audiobook it “hit the spot.” I had just finished some intense mystery suspense books and needed something lighter. It was very good for keeping me company as I drove, cooked, etc. It’s about a woman who discovers her husband’s infidelity, leaves him, divorces him, and starts a new life.

This is not hot and heavy passion and romance. Instead a friendship develops which eventually turns into more, but children have priority over romantic relationships. There are two sex scenes. They are referred to, no details.

One weakness was the secondary story about arson was not complete. At the end we are told X is the arsonist but nothing else. We don’t see why X did it, how it was done, and what happened to X and X’s family after.

I didn't like this one.
there's a formula out there right now that is "woman living cloistered/cosseted/protected/privileged life finds out husband is cheating. woman leaves. woman realizes she wasn't happy in said c/c/p/p life. unexpected stuff happens. new boy arrives. girl falls for boy. they live happily ever after." Some of them are charming. I wasn't charmed by Just Breathe.

The "mystery" subplot was under explored. The teenage step-daughter-to-be is half-heartedly developed and the climax of her storyline happens so fast it doesn't feel real to the reader.

Simply put, the story chafed. it was brain candy at best, but I've enjoyed other brain candy 100% more.