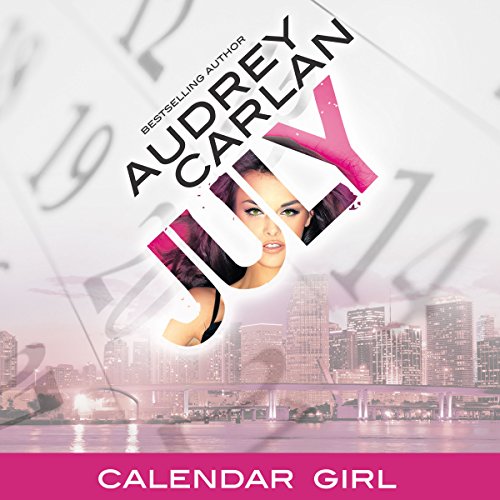 The second half to this year-long journey has taken me to Magic City...Miami. I've been hired by the nation's top hip-hop artist, Anton Santiago. His name is as sexy as he is, and it rolls off the tongue the same way his muscled form rolls to his music. He goes by the name Latin Lov-ah, and boy does he work that title from his rock-hard body, Latin hip-hop fusion dance moves, to the way he beds his women.

He's raw, dirty, and one hundred percent player...and I want to wrap my naked body all over him and forget about everything.

Every word that comes out of his mouth is a siren's song.

Every thrust of his hips draws me closer.

Every breath against my neck sends me into a tailspin of need and desire.

After what happened in June, I need to rip the bandage off. Move on. Anton could be just the thing I need to get my groove back.

I was hired to play the part of a seductress in Anton's new music video, but, in the end, I'm the one being seduced.

In the seventh book of the Calendar Girl serial, Mia is sent to Miami, Florida. Still on her mission to save her father, she is hired to be in a hot new music video where her unique look and recent popularity will prove invaluable.

Each installment in the Calendar Girl Serial will feature Mia's journey as an escort to twelve clients in twelve different locations.

What listeners say about July

this one was not the best 😞

The story line was completely unexpected but I enjoyed each of these short stories. The new characters each month add variety while the heroine charms me with a new twist as she meets new people.

Be sure to start with January!

Yes, these books are well written and have great performances. Loving this series.

Yes, I listen to them all in one setting.

This book we start to see some issues that Mia is having after last months situation. She is having a hard time moving forward. I am interested to see how the arrangement with Wes works out in the future.

It is hard to review these books without giving to much info out. Put this on your wish list!

I continue to love the narrator...she is perfect for the roll of Mia and glad things appear to be working out between Mia and Wes...still pissed about what happened in June but at least the author stuck to reality...it would b swept under the rug! Glad the Latin Luvah was a perfect gentleman!

lots of plot twists not what I expected. romantic and steamy at the same time.

What did you love best about July?

It didn't play out how u thought it would. The unexpected aspect was nice in a series that could easily get redundant. Seeing as there is still 5 books to go I was getting worried.

I really liked the secondary characters. Mr. Latino Lover is more dynamic than I'd expected him to be, when the book started I thought he'd fall into the stereo type.

Not necessarily, but seeing as it is short it was easy to do while I was working. If I had to pause it though I wouldn't be desperate to come back to see what happened next.

I'll be honest this series is starting to feel long. There's 5 more books to go and I don't know what else new can happen. I'm not desperate to continue, but will because I like to finish things. I think if your not a major reader or new to the genre this is a great series and fun pool read type books. I listen and read books every day so this series doesn't rank in my favorites.