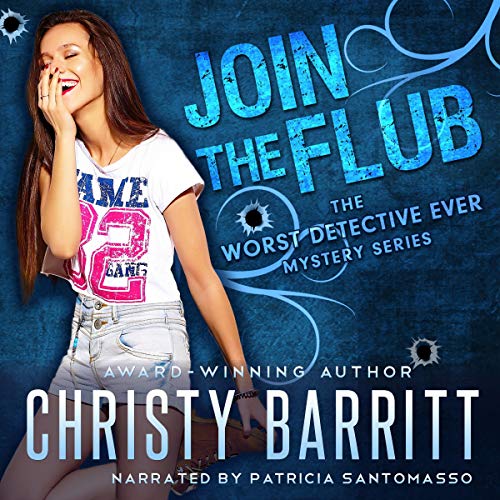 By: Christy Barritt
Narrated by: Patricia Santomasso
Try for £0.00

There’s no business like show business...especially when a killer is involved.

Joey Darling’s local movie premiere was supposed to be a win-win for everyone involved. All the proceeds would go to the children’s wing at a local hospital, and the online buzz would create positive press for the area’s tourism. But things go awry when the event is sabotaged and Joey’s stunt double is seriously injured.

Suspects seem sparser than quality G-rated movies, and police fear the intended target was actually Joey. Detective Jackson Sullivan and neighbor Zane Oakley - two men competing for Joey’s affection - insist on trading off guard duty until the bad guy is behind bars. To make matters even worse, Joey’s ex shows up right before the release of his tell-all book about his life with the Hollywood sweetheart.

Someone seems determined to create real-life drama. But Joey isn’t one to be deterred. Though a movie-worthy villain wants to pull the plug on this production - and maybe even on a few people’s lives - Joey is determined that the show must go on.

What listeners say about Join the Flub

Fun mystery with comedy and hint of romance

Perfect blend of light-hearted comedy, love-comes-softly romance, and mystery. Loved every minute! The plot is not completely unoriginal, but the characters make up it unique. The narrator really brings them to life.

Find out what murder & blue makeup have in common!

Another wacky mystery starring The Worst Detective Ever, Joey Darling! OK, so this series is probably one of my absolute favorites from Christy Barritt. Join The Flub was a little different in that....I can't tell you that! You are going to have to check this story out for yourself if you want to know...

I read the print version of this book a couple of years ago but that didn't dim my enjoyment of the audiobook one iota. The production was well done and the choice of narrator was spot on for Joey and friends.

Whether reading or listening, Join The Flub, from the talented pen of Christy Barritt, is a great way to pass an afternoon. It has the perfect blend of mystery and humor, with a touch of romance. Don't miss out!

(I received a copy of this book from the author. All opinions are entirely my own.)

I really enjoyed listening to this book. The story was interesting and Joey is not only having to deal with the new movie, but with two guys who are interested in her. And on top of all of that she has to deal with a murder and crazy fans.

I didn’t love the reader’s voice/performance, but it didn’t detract enough to have me stop listening. I read this book awhile ago and enjoyed the story. Joey is a clumsy and always getting into trouble, but she has good intentions and does solve mysteries even though her methods aren’t the best.