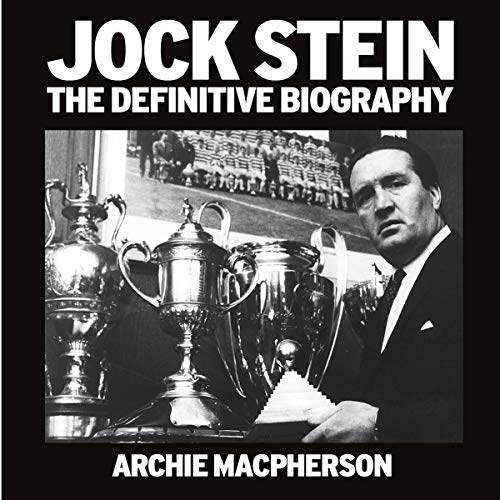 Archie Macpherson's compelling biography reappraises Jock Stein's career and looks closely at the personality of the man whose shrewdness and cunning stamped him eventually with greatness. Stein hugely influenced the history of football between his debut as a professional player in Lanarkshire in 1942 and his death at the side of the pitch in 1985. He redesigned the landscape of the Scottish game as the great innovator and successfully exported his values outside the country when European football was in the grip of the ice-age of defensive football. In that time he generated unprecedented adulation, created bitter enemies, and inspired myths. He also took on the established canons of sectarianism by becoming Celtic's first Protestant manager.

The author worked his entire professional life as a contemporary of Stein and traveled the world with him on different ventures. He was present at nearly all of the great triumphs associated with the Celtic and Scotland manager. The trail Macpherson so engagingly follows is from Stein's early days in the coal mines, and the hard grind of provincial football, to the grandeur of the Lisbon European Cup Final in 1967 and beyond. In examining the strengths and weaknesses of the major figure, this biography will nevertheless lead no one to doubt the sincerity of Bill Shankly's ultimate accolade to Stein in Lisbon. "John, you are immortal now."

Reviews of this book include:

"Quite simply this book is a gem." (Herald)

What listeners say about Jock Stein

Thoroughly enjoyable listen to Archie MacPherson telling his story of the 'football warrior', covering Stein's playing and managerial career. Archie covers the highs and lows in great detail. Highly recommended for all fans of football.

For someone who was born the year Mr Stein sadly passed away the audio book provided me a way to get to know the man and legend better and for that I will be forever grateful., well done Archie, I enjoyed it immensely

A great listen about a Scottish sporting legend.

This is a captivating story, and thoroughly enhanced by Archie's intimate knowledge of the subject and the delightful Scots burr with which he recites it. Macpherson pulls no punches and tackles the big and ugly issues of those days in the West of Scotland. Given that Archie Macpherson commentated on or saw many of the games he refers to, and accompanied Stein on many of his travels it is a genuinely contemporaneous account of events.
But this is mainly a story of triumph, of the great Stein succeeding against all odds, including at times his own directors! He led Celtic out of the wilderness and put them on the top rungs in European and World football within 3 years. He was a giant of his time.
This book got me through lockdown, my companion on hours of endless walks. Time flew past and I was very sad to reach the end!
Well done Archie, without doubt the best sporting bio I have ever read or listened to.

A fascinating and inspiring story of possibly the greatest football manager of all time. Only Clough and Ferguson are his equal. A true football man who rose from humble beginnings to lift the greatest prize of all. Today's footballers and managers pale into insignificance. Stein broke through conventional thinking and fashioned a team in his own image and changed the way people think about football. Archie Macpherson does a superb narration, bringing this story to vivid life. A must listen.

An excellent portrayal of the legendary manager. Macpherson’s distinctive tones make for easy listening whilst all the facets of an incredible life story keep you hooked from start to finish.