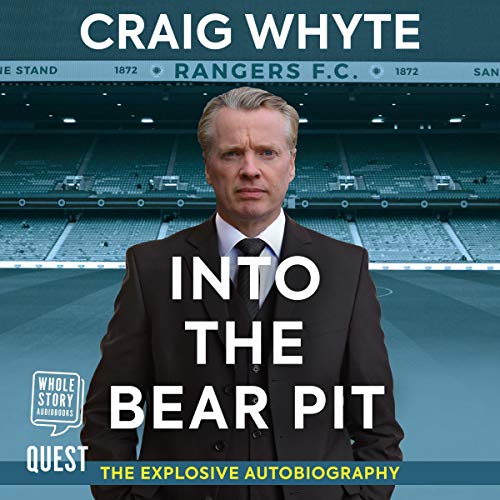 Into the Bear Pit

By: Craig Whyte
Narrated by: David McCallion
Try for £0.00

Full of startling revelations, this is the previously untold story of greed, corruption and scandal at the heart of Rangers FC, told, definitively, by the man who was at the very centre of the storm.

From being the most dominant club in Scottish football history, Rangers FC was sold to Craig Whyte in 2011...for £1. Although touted as Rangers’ saviour, he was soon hung out to dry as the fall guy for Rangers’ misery as the unthinkable happened. The club was plunged into liquidation and the club suffered the indignity of demotion to the lowest echelon of Scottish football. The demise of Rangers saw Whyte’s reputation eviscerated on the pages of every newspaper, his name vilified on radio shows, TV programmes and blogs. In 2012, he was arrested and accused of fraud. Although he was acquitted, he had to endure years of false accusations from media outlets and multiple death threats from fans. Now, for the very first time, this is his account of the events that shocked world football.

What listeners say about Into the Bear Pit

Rated as a fictional classic

If you want something entertaining, this is for you, particularly if you're a fan of the classic "Walter Mitty". This is Whyte's chance to put his side of the story but it's so one sided, it's hard to take any of it seriously. To be clear, David Murray played a huge part in the demise of Rangers FC and the evidence is, the fact he "offloaded" it to this Del Boy charlatan.
I don't think I've ever read a book with so many obvious contradictions. Examples such as he was a Copeland Road season ticket holder (aged 13/14) but could only remember Davie Cooper from then or he was never comfortable recording phone calls but then cites numerous occasions during his underhanded dealings with Charles Green. Nothing new or surprising here to change my view of this despicable individual, though it is mildly amusing hearing his attempts to denigrate everyone who crosses his path and divert the blame away from his devious behaviour and tactics.