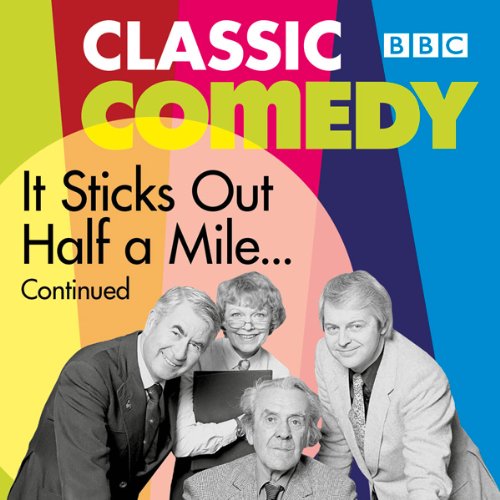 It Sticks Out Half a Mile Continued

"Inspecting the Piles": In order to save money, Hodges, Pike, and Wilson decide to inspect the foundations of Frambourne Pier in an inflatable rubber dinghy - at night.

"Pike in Love": Uncle Arthur is called in to give Pike a lesson on the birds and the bees.

"The First Meeting": The first meeting of The Friends of Frambourne Pier Association is convened. Arthur Wilson attends, but has to explain his evening out to a suspicious Mrs Pike.

What listeners say about It Sticks Out Half a Mile Continued

Loved the series. it's just a shame that it ended as it would have been brilliant if they could have had a few more series.
Pure comedy gold when Pikey is getting a bit frisky with his girlfriend.

From home front to seafront.

Gentle reminder of when comedy was about laughter and not all this pc stuff
Nice to see what could have happened to pike, Wilson and Co.
Not as good as dad's army but what is.
And no I'm not one of those who hates new comedy but still nice to reminisce with the comedies from your childhood.
Never caught this when it originally came out so nice to use audible to find gems from childhood.
Memories come flooding back.

Of a time before personal computers, internet and "anti" social media. A perfect antidote to Eastenders and every day hassels! Marvellous stuff that I missed whilst workting long hours to pay bills.

I love the idea that we get to experience the characters again...wish they offered the whole series and not just 8 episodes. There are 5 missing...