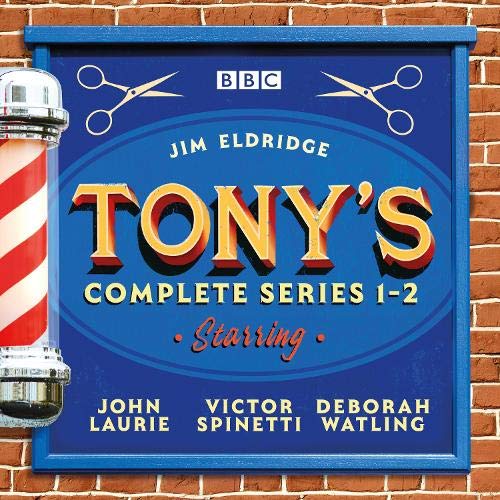 Victor Spinetti stars in this BBC radio sitcom about the hilarious misadventures of a corner-shop barber.

North London barber's shop Tony's might not be the trendiest salon in town, but it's definitely the cheapest and the cheeriest. Run by exuberant Italian Tony Fucetti, it's the place to go if you want a bargain cut and blow-dry from apprentice Maisie, or a short back and sides courtesy of Scottish hairdresser Hector (just watch out for his razor).

These 12 episodes follow the highs and lows of Tony and his team, as they prepare to beat Boris the Russian in a hair-styling showdown, give the corner shop a makeover, take on new stylist Stanley and try to avoid the attentions of the taxman. Plus, Tony's Mama decides to find him a girlfriend, a hairdresser exchange programme leads to publicity - and disaster, a contretemps over a customer's bright green barnet leads to a court appearance and a day out at the seaside doesn't go quite as planned....

Please note: This is a vintage recording. The audio quality may not be up to modern-day standards.

Content warning: The humour of the programme reflects the era in which it was broadcast and therefore may not reflect current views.

Created by award-winning dramatist Jim Eldridge (Parsley Sidings, Albert & Me), this classic barbershop sitcom is a cut above the rest. Comedy veteran Victor Spinetti stars as Tony, with John Laurie (Dad's Army) as Hector. Deborah Watling (Doctor Who) as Maisie and Deryck Guyler (The Men from the Ministry) as Stanley. Among the guest stars are Carry On... actor Kenneth Connor and 'Allo 'Allo's Gordon Kaye.

What listeners say about Tony's: The Complete Series 1-2

Another great comedy sitcom reminiscent of the Carry On period. If you liked Parsley Sidings then you will love this. Equally if you enjoy this then do check out Parsley Sidings as well. Simple, funny humour in bite sized 30 minute episodes.

I remember this series so well from it’s original Friday night late slot. We used to put this on the radio and laugh helplessly at the sheer silliness of the whole idea, and I have wanted to get hold of it for donkeys years but couldn’t remember what it was called. Ecstatic to have rediscovered it and love to have this on through the night. It is utterly undemanding intellectually (understatement!) but totally harmless and takes you to another (strange) world of hairdressing. Silly, funny, very English, and for me nostalgic. Like a dear old friend.

Great comedy I loved the accents the classic jokes.
The plots really good really well written.
I thoroughly loved it.
Listened to this a few times.