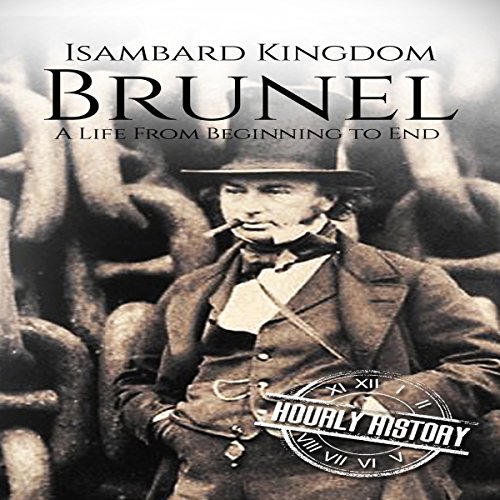 Isambard Kingdom Brunel: one of the most famous engineers the United Kingdom has ever produced. A man who put his stamp on his own country in the most visible way possible: through the construction of bridges and tunnels that stand to this day and by transforming both the landscape and the nature of society.

In 2002, Brunel was voted the second-greatest Briton of all time in a BBC survey, second only to Winston Churchill, putting names such as Darwin, Shakespeare, and Newton behind him. In 2006, numerous events were held across the United Kingdom in celebration of Brunel’s 200th birthday. There are few engineers with such a long-lasting and widespread legacy.

You will hear about:

This audiobook will tell the story of the man known affectionately as “The little giant,” through telling the stories of the incredible achievements that made him a household name in his own lifetime and to the present day.

Brunel in an hour? Can it be done?

I thought it was a tall order too cover I.K.Brunel's life in an hour and I was right. No offence but at times it felt like being read to by an A.I. or geographically challenged sat nav.

I would only say, thank you for the giggles. If you are going to talk of British cities and towns, at least learn how to pronounce them.

Sorry To say the pronunciation of

Many place names w ere pronounced wrong and this spoiled the overall
Effect ness of the story,