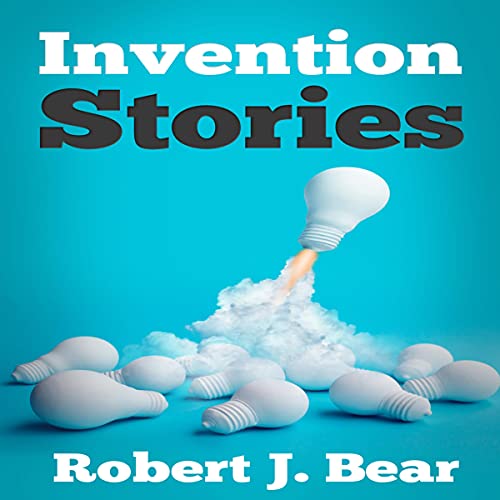 By: Robert J. Bear
Narrated by: Samantha Novak
Try for £0.00

And it changed their lives forever.

What sparks the inventor’s mind?

Deborah Chester had a dream about two tornados hitting her house. Then, it happened and she became homeless. Then, her husband had a dream. In his dream, the idea for the Rim Pro-Tec came to him.

Now, they are millionaires.

We all get hungry. Snacking can be serious business. Dan Ferrara hated the messy hands from finger foods, so he set out to do something about it.

He created Trongs. They let you get your nom, nom, nom on without the mess.

And who knew there would be a market for spandex bodysuits? Colin Grussing figured it out and was a guest on Shark Tank with his invention Root Suit. When they asked if he had made any money, he said, “Hell yeah.” In the previous year, 10,000 units sold for a profit of $104,000.

Have you ever had an idea? Could it change the world? Where do you go first? What will be your invention journey?

The following are stories of invention written by their inventors because their paths to success just may show you the way. At the very least, they will entertain and inspire.

What listeners say about Invention Stories

Again style of writing is so beautiful it feels like you are listening not a history audiobook but a story audiobook. Narration is great too. Amazing all around.

The author covered so much with great perspective and objectivity! I would recommend this audiobook to anyone interested in History,

I loved all the helpful tips

It was very well written and the characters seem to come alive as you listen. I just wish I had learned about this audiobook.

I love and suggest it.

This audiobook explores the importance of creativity in our world and the many processes by which to be or become more creative. A must-read for all in my opinion!

The narrator was wonderfully

I enjoy being able to learn so much in such a short amount of time. This would be a fun game to play with older children while they are doing crafts or something similar.

It was very well written

This is a great history lesson. I discovered a lot of things that I didn't know before. The narrative was really excellent.

This is a true treasure! With all of these 1800s movers and shakers building up to this crescendo of storytelling, it's quite wonderful.

This is one of the best-written book

A fascinating inside look at the intertwined stories of a bygone era. We rarely think about this period of time.

This is probably my first Audible story

A one-of-a-kind and startling historical tidbit I was on the edge of my seat, waiting to see what would happen. A fantastic performance.

This book was the best overview.

While listening to the audiobook, I use immersion listening. The audiobook was enjoyable. Thanks Author

This was the fascinating story

The numerous people and things that led to the steam-powered locomotive are depicted in vivid detail and color. Also, great narration!

I'd recommend this audiobook to lovers of history or the mechanically or technically inclined. Thanks

My loves this series and really enjoyed this book. Highly recommend. thank you Robert J. Bear

My students love for me to listen this book to them. thank you author Robert J. Bear