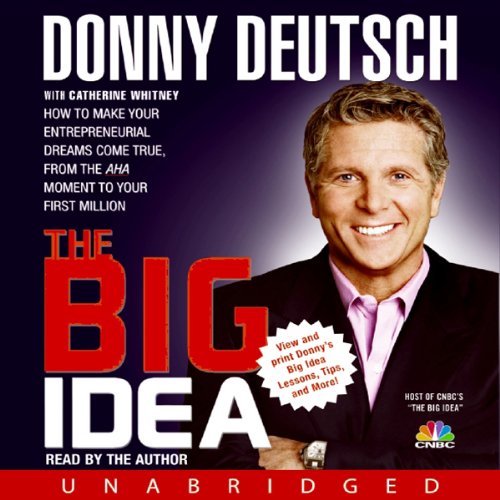 Donny Deutsch's hit CNBC show The Big Idea has put the spotlight on that ordinary moment and the people who have the courage and stamina to make their dreams come true. Some people think a big idea is like a lightning bolt striking out of the blue that slams you in the head. But it's hardly ever like that. The big idea isn't an act of God. It's an act of daily life. Simply put, the idea that will make millions starts with an observation.

A carpenter gets tired of almost losing a finger every time he slices a bagel. Bam! The Bagel Guillotine. A mother is frustrated that her pantry is full of stale food because the packages don't close. Bam! Quick Seals. Howard Schultz notices on a trip to Italy that there are coffee bars on almost every corner. Bam! Starbucks.

In The Big Idea, Deutsch draws not only on his own tremendous focus and expertise, but on that of dozens of the successful entrepreneurs whom he has interviewed, to help you create your own enterprise.

From the "Gut Check Moment" to "Mom Power," The Big Idea takes aspiring entrepreneurs along every step of the way. The Big Idea is your road map to the American dream.

"The author's enthusiasm and interest in his readers is apparent on every page, distinguishing this book from the dry, disinterested business guides that fill the small business startup bookshelves." ( Publishers Weekly)

What listeners say about The Big Idea

THE book on getting your ideas to market

I used to watch THE BIG IDEA religiously (and was on it twice ;) Donny tells it like it is in total realism without all "THE SECRET" or worthless delusional positive thinking books out there. I really miss the show and this is the "nuts and bolts" of what it was all about.

Although Donny comes from wealth the stories he presents of those that struggled to be successful and how they did it is incredibly inspiring.

I wish this book was even longer. Get rid of those books that tell you how to wish for success without any reality based info and get your ideas going by listening to this. Hope he does a follow up, I'll be first on the list to get it.

This will help you unless you're already performing. This is a book about a guy who mimicked his dad. Most boys naturally do this. Find a book about someone who rose from nothing. There are many.

Nothing more than his EGO and self talk

The area I felt this was lacking is how to transform yourself, what are the tips, tricks and methods I could learn from him. All I got was his story.... If it was sold as an autobiography I would have maybe provided different feedback. I listened to it and was disappointed, I listened again to ensure I didn't miss anything and I was surprised to learn... I didn't.

Egotistical self talk about how I did it and why I am so great....

this will truly drive your ambition. If you didn't think you can make it give it a listen you'll be happy that you did.

Bought this book for 1 Credit and the only thing that downloaded was the review!! Not cool Audible!! Not cool!

I'm an aspiring Inventor and lately I had been feeling a bit deflated in my progress. This book has given me new inspiration to not give up and to keep on keepin' on.

Not worth my time or the credit I paid for it.

Like everybody else, I found the stories to be inspirational. The book itself was a let down, though. It didn't add any value to my goals. Yeah sure, its nice to hear people succeeding but there was no details! It's just one random short story after another. After a while it got so boring and repetitive. The only reason why I even bought this book was because it was recommended by Tim Ferris from the Four-Hour Work Week. Bad decision. If I really want inspiration, I'll go to YouTube and watch a bunch of videos. This book was a giant "7 habits of successful people" waste of money. It's filled with generic short stories about people's determination to succeed. This book could have been just 1 sentence long. "Believe in yourself." Done. And I'm sorry, but Donny is a terrible reader. By chapter two I was so sick of his up/down volume style of reading that my ears wanted to vomit. He decreases his volume at the end of every sentence and its so annoying! I hated this book. Save your money and buy a book with practical advice.

I wish I read this when I was younger. In any case I think this book is full of Gold

Worthy of my time. Inspirational easy to listen to. Easy to put yourself in the story and make you think.

I was a little hesitant in buying the book ...but definitely shouldn't have been. The book was GREAT!! ...really gets you pumped up and motivated ...turns on your entrepreneurial spirit! .....absolutely loved it! Full of insight, easy to listen to, and lots of interesting real life success story's. -----definitely has top spot in my motivational library.