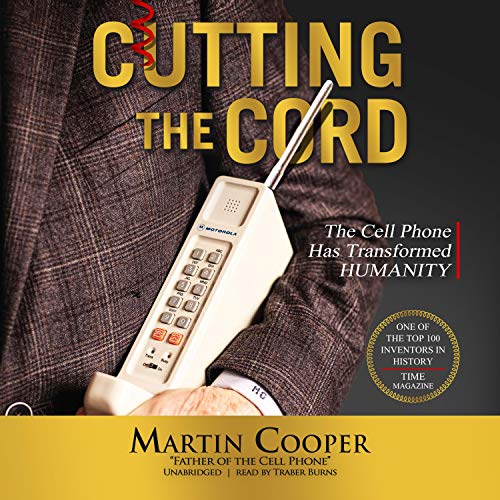 By: Martin Cooper
Narrated by: Traber Burns
Try for £0.00

The cell phone changed the world. It revolutionized how people communicate, freed them to get in touch with one another at any time, in any place without the constraints of the wired network. The cell phone led to the creation and growth of new industries. Yet the true story of its creation has not been told.

This book tells that story. It centers on a battle for control of how people communicate, involving government regulators, lobbyists, police, technology breakthroughs, failures, quartz, and a horse. At the center of that story was Martin Cooper, an engineer, entrepreneur, and futurist. The chapters in his life influenced the creation of the cell phone.

Industry skirmishes became a political war in Washington, a struggle to prevent a monopolistic company from dominating telecommunications. The drama culminated in the first-ever public call made on a handheld, portable telephone - a cell phone. Despite that, the cell phone we know today almost didn’t happen.

Without the vision of a small group at Motorola, the last 40 years would be different. Their story is inspiring and instructive. After a 29-year career at Motorola, Cooper became an entrepreneur, helping launch companies dedicated to accelerating cell phone adoption.

The story of the cell phone has much to teach about innovation, strategy, and management. This book also relates Cooper’s vision of the future of personal communications. That story is far from finished. We have only achieved a small fraction of the cell phone’s potential impact.

What listeners say about Cutting the Cord

As a former Electronics engineer I really enjoyed this story. I remember reading about this project in popular science way back when.

As a Telecom technologist, I always dreamt of meeting Martin Cooper, father of Cellular Phone and Andrew Viterbi who gave the Viterbi Algorithm to the world. This book connected me well with Martin Cooper and I felt as if I have been narrating my story of how I started designing India's first village phone.. Amazing to hear from Marty how he has elevated himself to a well known wireless innovator/inventor of 20th century. it is also a proud moment for him to witness the evolution of cellular phone beyond his imagination. It is a great lesson to learn, how his perseverance and determination helped him to achieve his goal amidst the corporate and bureaucracy. I loved listening to this book. Marty and his wife Arlen are the globally known wireless celebrity couples and their contribution and innovation will continue to benefit the fast evolving connected world of everything.