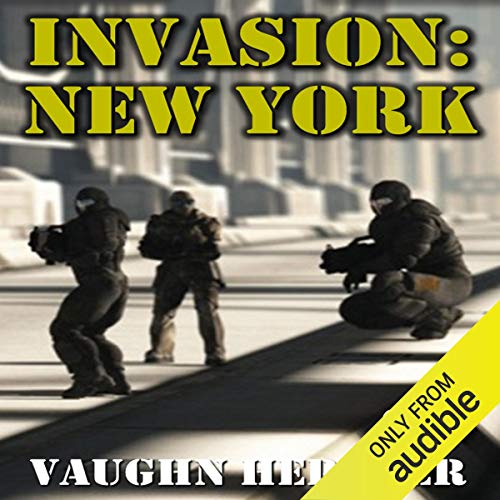 By: Vaughn Heppner
Narrated by: Mark Ashby
Try for £0.00

In 2040, a shattered America squares off against the world! Once, America was the most powerful nation on Earth. Then disasters rocked her: a sovereign debt depression, bitter glacial cooling and the greatest military invasion in history out of Mexico - by the Chinese and Brazilian alliances. Now the U.S. reels like a drunken giant. The military fought savage battles in the Midwest last winter, driving the aggressors from Denver, but unable to kick them out of the country. Others have taken note of this, particularly as worldwide famine worsens, with global temperatures continuing to plummet. Like swirling vultures, the German Dominion decides to grab their share of U.S. soil to help feed their hungry peoples. They've shipped a deadly expeditionary force to Quebec and put a tactical genius in charge. He assures the Chancellor of victory as he plans traps within traps. But the genius hasn't counted on the American soldier: ragged, tired and angry as hell. The world is about to witness a battle to the bitter end as failure means mass starvation.

Invasion:New York is a disturbing techno thriller of war in 2040, in this, the fourth book of the series.

Would you listen to Invasion: New York again? Why?

This book ranks in my top five - it is believable, the characters are relatable, has suspense is bucketloads. The technology described in this book....I would not be surprised if this is in the works in the next 20 years, scary.

What does Mark Ashby bring to the story that you wouldn’t experience if you just read the book?

The voice acting is superb. Accents are spot on - German, English, American. The main German accent was concise, halting, and really fit the personality to the tee.

This book made me giddy with dread then excitement. The suspense and twists....It's like a sci-fi Game of Thrones. Awesome.

Error right at the beginning!

What did you love best about Invasion: New York?

The high-technology used throughout.

Which character – as performed by Mark Ashby – was your favorite?

All had equal merit.

Everything was wonderfully written and seemed quite plausible, HOWEVER, being Canadian, Halifax is in NOVA SCOTIA!

That was a really bad mistake to make on the first page!

You can't go wrong with Heppner. This is my 4th book in this series and I have completely enjoyed each one. this author is a serious student of history.

Another excellent prophecy of a possible future

This was an excellently written story. Bleeping our favorite characters alive and winning in the USA way. I can't wait to finish the series as some behind is seriously kicked both of the invading enemy and the more disturbing inner enemies of freedom. Those in power. By the way a Medal of Honor winner must be saluted by all ranks in the military no matter how high. So Col Higgins should be receiving just a bit more respect. God bless the USA.

this series is really pretty good. another knock out by Heppner. can wait until I get the next one...
as for who is doing the reading.... not my favorite. voice just seems so monotone.