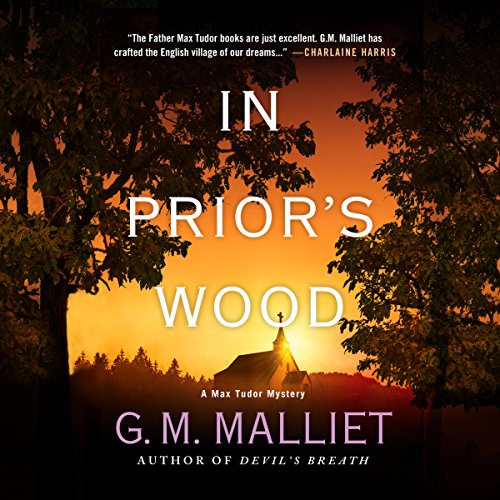 Newly returned from investigating a murder in Monkslip-super-Mare, former M15 agent Max Tudor wants nothing more than to settle back into his predictable routine as vicar of St. Edwold's Church in the village of Nether Monkslip. But the flow of his sermon on Bathsheba is interrupted when Lady Duxter is found dead after having made a suicide pact with her lover.

Lady Duxter's husband rallies quickly from the double tragedy - too quickly, it is murmured in the village. Having already planned a writer's retreat at his manor house, he insists the show must go on.

But when a young girl goes missing and a crime writer becomes a target, DCI Cotton asks Max to lend his MI5 expertise to the investigation.

Many suspects emerge as the scope of the investigation widens beyond the writers to villagers who have crossed swords with the insufferably smug crime author. Soon Max begins to wonder if the attack on the writer was part of a broader conspiracy....

What listeners say about In Prior's Wood

Would you try another book written by G. M. Malliet or narrated by Michael Page?

I've got all the others in the series but this one was predictable, I'd think,carefully before using up a credit on another one of his books.

Difficult to put it into just three words. I normally enjoy his narration, even if everyone sounds like they are from the1930s, but this one droned on and I nodded off a couple of times; I don't think there were enough character changes.

Becoming one of my favourite authors

I came across this author by accident, I have absolutely love Nether Monks Wood. My husband said he’d love to I’ve there because of the bakery,

I like how the story evolves whilst listening, you can quite easily imagine yourself walking down the high

Looking forward to the next story

I normally enjoy this series, but this time it seemed like the entire story was in the wrap-up at the end. A lot of narration, little sense of the characters and no action.

story took too long to get past chsracter intros, too many characters, not enough distinction between voices. aburpt event changes and solvings. too long of ending (perhaps to balance out the beginning)

I love this whole series.

The story solution surprised me and I generally get it sooner. I love the narrator's voices. When is the next one coming?

Not up to her previous stories

The last two hours was a recap of what went before. It went on and on rehashing and repeating previous events already covered in the story.

Story was ok but really dislike narrator. He cannot do a women’s voice and I dislike his high pitch tone.