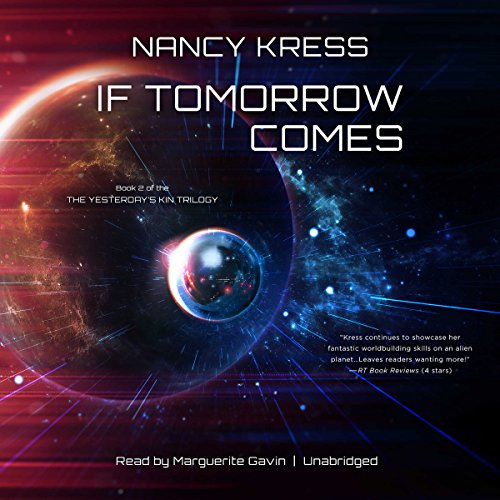 Ten years after the aliens left Earth, humanity has succeeded in building a ship, Friendship, in which to follow them home to Kindred. Aboard are a crew of scientists, diplomats, and a squad of Rangers to protect them. But when the Friendship arrives, they find nothing they expected: no interplanetary culture, no industrial base, and no cure for the spore disease.

A timeslip in the apparently instantaneous travel between worlds has occurred, and far more than 10 years have passed.

Once again scientists find themselves in a race against time to save humanity and their kind from a deadly virus while a clock of a different sort runs down on a military solution no less deadly to all. Amid devastation and plague come stories of heroism and sacrifice and of genetic destiny and free choice, with its implicit promise of conscious change.

What listeners say about If Tomorrow Comes

If u want to be preached to read this. Has all the politically correct symbols. It’s hard to believe what is being pushed. Like reading a dull political essay wrapped in Science fiction lacking in vision

If “Woke” was a planet

Sorry, I know it’s a free book but I have to be honest.
The first book was better than this one! To simplistic (as if written for 12 yo child), really “wokeish” (being a liberal myself, even I couldn’t take it), and it feels like the author was paid by the word. Too long, too much bla bla. I just couldn’t wait for it to end!

I never listened to the first part, otherwise I would have never listen to this book. Most terrible plot line and shallow characters. After 2 hours I couldn't bear it anymore and stopped listening. Since it was for free I won't complain...but for the time I wasted. I hope everybody in this story succumbs to the Spores, but I just saw there is even a third book...arghhhhhh.
But apparently there are many people who like the story, so make up your own mind, but if you are looking for KTF.....there is none as far I can say!

Just as boring as the first book

suck a cool concept for a book but there just so damn boring, I feel like they tried to give it some action with the Rangers but it didn't help. Also if you're going to use a real military unit in a book do some research or atleast talk to someone in the military. There so far off on any sort if reality with the military aspect.

As good as the first

Lots of ideas. Good story that resists simple dichotomies of good and bad. Story works through a lot of the grey space of social complexity.

Easy to pick-up since you're acquainted with a few characters and the situation. Finishes 1st

Language spoils content, odd too that I am finding so many stories about s world wide plague and socialism.

It was rough to listen to. Disappointment after the first one. I was convinced it was a different author, but was wrong. Went from a sci-fi book to an explanation on bad military tactics. bad bad

Great book if you believe people can't get along

Book premise assumes conflict, terrorism and war are inherent in humans whenever supplies are limited.