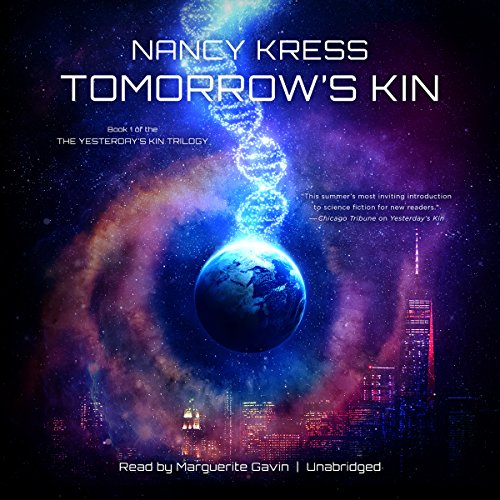 Aliens have landed in New York.

A deadly cloud of spores has already infected and killed the inhabitants of two worlds. Now the plague is heading for Earth, threatening humans and aliens alike. Can either species be trusted to find the cure?

Geneticist Marianne Jenner is immersed in the desperate race to save humanity, yet her family is tearing itself apart. Siblings Elizabeth and Ryan are strident isolationists who agree only that an alien conspiracy is in play. Marianne's youngest, Noah, is a loner addicted to a drug that constantly changes his identity. But between the four Jenners, the course of human history will be forever altered.

Earth's most elite scientists have 10 months to prevent human extinction - but not everyone is willing to wait.

What listeners say about Tomorrow's Kin

Introspective family drama with a sci-fi plot, spanning global events around humanity's relationship with alien cousins. As a thought experiment, the politics was frustratingly believable, although I was confused at how the incorrect attribution of blame was so widespread. This acceptance of illogical political forces is a common theme for Kress. I enjoyed this book, though not as much as her Beggars trilogy, which was really packed with concepts and political dilemma, this felt a little smaller somehow, although maybe develops more in sequels.

Competent narration overall, although voice acting of characters was a bit unconvincing and distracting. I didn't warm to the characters particularly, due partly to the writing and partly the delivery. Not sure if I'm invested enough to read the next installment. Kress is good at confounding your expectations, weaving unpredictable narratives; I don't know where this story of interplanetary politics will go next.

And 80 % longer than it should have been. WOULD have been better as a novella.

Not Really Sure What I just Listened To...

I have to say that I've just finished listening to this book and, I'm afraid to say, completely baffled about what it was all supposed to be about...

It started off with a reasonable chance of going somewhere interesting; however, around half way, it became a children's book. The language changed, and the story just stopped moving in any specific direction.

Had to bail at chapter 6

The first chapter or two were a little rocky but as I got into the writer's style the narrator continually ruined it for me. She doesn't do male voices well at all (and the main character is male) but I think it was finally in chapter 6 when she was narrating the subject's drunk mother and it just sounded too goofy to continue. I'll just check for kindle version as the story premise was really starting to interest me.

I appreciated the premise but the writing was little more than simple google-like references to the technological context of the story. Making the actual story, a bit of a slog. In addition, it just keeps getting more and more abrupt, key characters get development and then culled. Fiction used as factual story components is then demystified as 'fiction'. ultimately, there are several promising storylines that could have been really well developed, but somehow they get so poorly treated that even if they were to be developed, the level of annoyance at their progression prohibits wanting to bother.

This is concept sci fi. The author is working through some ideas about first contact that might transpire in unexpected ways. If you want space battles and fights with aliens for human survival, look elsewhere. But if you want a thoughtful engagement with ideas about environmentalism, human crisis politics, and alternative social orders, this is for you. There's a bit too much focus on sex at points ⎯ as if the author is trying to channel some of O. Butler's idea's on sex and becoming.

Nancy Cress is a Seer

A great story, amazing how the reactions crafted in 2014-2015 have proven so prescient in the pandemic. A great mix of science and family growth. I recommend it

The book took no time to get the attention of the reader and suck you in! I'm looking forward to the next one!

Got this book to try and thoroughly enjoyed it. Nancy Kress and Marguerite Gavin are now names I will look for in future books.

Probably a story in here somewhere

There is probably a story in here somewhere but it gets lost in the details of microbiology and virology. I got through about 8 chapters before I gave up. The author needs to take some writing classes if she hasn't already, if she has she should ask for here money back. SHOW, DON'T TELL.

Total waste if time and money

At one point I was hoping that it was Arrival awkwardly turning into Darwin's Radio, but it never really did . And the final act was such an insult my intelligence I thought it was written for my six year old.
Do not bother with this low quality writing. If not for the completely unnecessary "sex scenes", I would have thought it was little kids book.
What a disgrace for the author of Beggars in Spain.

Great story. Strong female lead with awesome science. A worthy read. The story is engaging and has great character development.