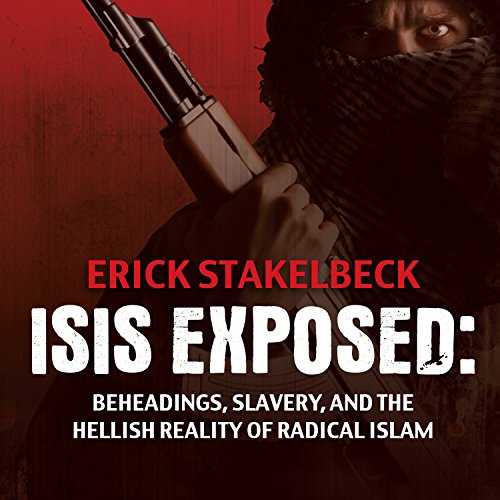 Terrorism expert Erick Stakelbeck pulls back the curtain on ISIS, the violent terrorist organization spreading death and hate in the Middle East. The rise of ISIS took the White House by complete surprise: President Obama called the group "JV" then was forced to reassess when ISIS began executing innocent American journalists. Now radicalized Americans and Europeans are joining ISIS' ranks.

So who is ISIS? How powerful are they? And are they a threat to the homeland? Stakelbeck, a veteran national security reporter and a leading authority on the Middle East, has produced the definitive guide to America's most recent and most frightening enemy.

What listeners say about ISIS Exposed

I didnt download this to listen to some extreem right wing American ranting nonsense about their black president. Its not all his fault, its such simplicit rubbish. He calls him "imam obama" at one point. For me this ruined any interesting points made further on as i feel people like this man are not helping the world with their finger pointing that im sure backed up their already held views. Im not a democrat btw, im not even american.

Read quite a few books on this subject. The author explains in great detail, and easy to understand. And the book is extremely interesting.

No favourite character due to the serious nature of the subject.

As not a novel. I like the whole book. Treated this subject matter with a fresh approach, giving new information that held my attention.

No had to listen in a few sittings.

Out of all the books I have on this subject. By far this is one of the best in it's genre. The narrator had an excellent voice, he propelled the book along and was very easy to understand.

Clear, factual and motivating with the exhortation to do something about it.

Stakelbeck knows what he is talking about and does so with passion.

This is a good place to start if you are interested in learning about ISIS and radical Islam. But for people who follow these issues closely there is little to learn in this book.

Please rise up and destroy iSIS

Another great book by Stakelbeck. Check it out, Infidels! Today while you can. Don't be late.

The facts speak for themselves but the PC liberals in our country and most European countries are in denial and wearing earplugs.

Nothing much on ISIS

Rehash of news stories. Nothing new to learn here. Everyone is rushing to write books on ISIS but nothing of substance.

Provides a basic overview of the media's portrayal of ISIS, interspersed with right wing anti Obama jibes. The author echos certain sensationalist media claims, and makes no attempt to investigate them, some of which have been proven untrue.
Treats this very difficult subject without any of the necessary nuance.
Only read if you are a right winger who wants his views reinforced.

I was looking for a book on Isis found in well documented research and historical sources. What I got was right wing rhetoric and fear mongering disguised and an objective look into the terrorist organization.

If you are interested in the book please research the author so you get good idea what the content of the book is going to be. Make sure you are satisfied with his background and the sources to sites when he gives facts.

This reads like something a junior anchor on Fox News would write. Nothing much new here, just a poorly written and disjointed series of essays ripped from new stories we've already read. The author's thesis seems to be -- big surprise -- that Obama is somehow to blame.

If you watch Fox News exclusively, perhaps you'll enjoy it, but you've probably heard it all before.

Americans should read this book

I am a 9/11 Family and find it surreal where we are as a nation. Americans need to reAd this book to WAKE UP! The ONLY hope for Americans is a Great Awakening! We Americans NEED to humble ourselves and return to Almighty God, the God of the Pilgrims who brought the Judeo-Christian values to America. Life, Liberty, HapPIness cannot happen without the Giver of Life. America is a nation gone adrift. Yet even in this late hour God, who is great in mercy can turn us around. What will our children and grand children say of our generation. Christian leaders need to bring prayer to the forefront and never stop praying for divine intervention. Americans have no clue how desperate we really are. May Jehovah God have pity on us and send his power to America again. In Jesus name I pray. Amen.

Would you try another book from Erick Stakelbeck and/or Tom Perkins?

Would you ever listen to anything by Erick Stakelbeck again?

The narration was fine.

The title is faudulent. This book is less about ISIS and more about the authors criticism of the Obama administration. You'll get far more info from Michael Weiss or Jody Warrick's books which have no shortage of criticism for either the Bush or Obama administrations but spend very little time doing so and withhold any insults, unlike this book. The author is absurdly biased and loses credibility as a result. Topics are only covered deeply enough to support his anti-Obama screed, which robs the reader of true understanding of the complex form and history of ISIS, a truly fascinating topic. If you are truly looking to better understand ISIS, look elsewhere!