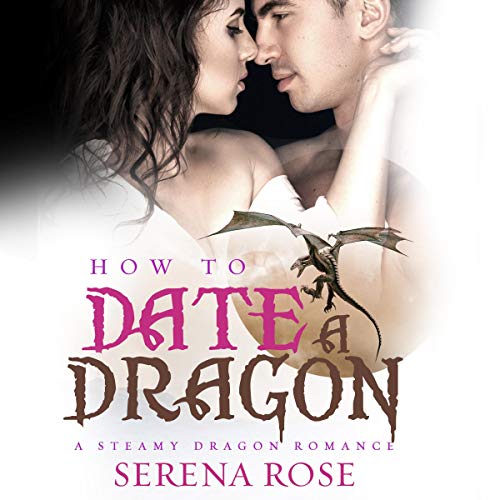 How to Date a Dragon

By: Serena Rose,Simply Shifters
Narrated by: Meredith Nash
Try for £0.00

Kelsey Long had dedicated her life to studying and had never experienced love.

But her world was turned upside down when she met the handsome and witty William Drake.

On the outside William appeared like any other guy, but the truth was that he was a 100-year-old weredragon who had seen and experienced things that most humans wouldn't believe.

Dating a girl like Kelsey was nothing new for William but for Kelsey this was a first and she was worried.

The truth was Kelsey had never been with a man before, let alone a dragon. Would she have what it takes to please him? Or was this relationship set to end in disappointment?

This is a steamy dragon romance that should only be listened to by adults!

What listeners say about How to Date a Dragon

This audio book lifted me up from a bad day. It is very entertaining because the story is great. It is hot and sexy. Well written by Serena Rose. While Meredith Nash narrated this well too.

The story is unique and enjoyable to listen. It has a lot of flavors. It is romantic and hot like a sizzling plate. Love it!

Love the characters and how their story flows. It is not boring at all. There is always a point where the listeners will feel excited. Thumbs up!

This audio book is becoming my addiction. I can listen to this everyday. I recommended this to my friend and he liked it! Romantic hot!

This audio book entertains me so much. It is narrated well. It feels like I'm with the main characters and seems real. The author is so brilliant writing this. Recommended!

Not a waste of time

I enjoyed this really that's why I can tell that listening to this is not a waste of time. The story is original and unique. The characters are lovely. Hot and sexy! Highly recommended.

"How to date a dragon" is the kind of story I was looking for. Great masterpiece by Serena Rose. Very romantic and seductive. Meredith Nash also did a great job narrating this. 5 stars for me!

My heart and my mind just wanna explode right now. I am amazed by the story line, really. This made my day. Please release the part two!!!

The romance never stops with this story. It is well written and very fantastic. The main characters uplifted my mood. They are a real match even though the guy is a dragon.. This made the story so unique! Thanks

Never thought that I will be impressed by a dragon story like this. This audio book is very seductive. Full of romance! Will recommend this to my friends.

It is full of suspense, romance and mystery.

I absolutely loved this book 'How to Date a Dragon'! This book was full of suspense, romance and mystery. The narration was good and the author did a great job with the character builds and plot. I found myself taking the longer route home just so I could listen to it in the car; it keeps you going and wanting more! This is my first book by this author but definitely will not be my last. I can't wait to listen and read other books in this series!

This audio book was very entertaining. I have enjoyed the characters and storyline. Intense, dark, seething with sexual tension and mystery and suspense. The relationship between the two main characters is so unexpected. The twists and turns as different information is uncovered and the truth is revealed is mind blowing. I look forward to the next book in the series!

keeping my interest from start to finish

There is a very good storyline here that unfolded slowly, keeping my interest from start to finish. The author will able to draw you deep within the story to a place where your imagination takes over and you view the story within your mind and fall in love with each character in each setting as if you are there experiencing it. Very well written and performed and super engaging.

I love the flow of the story. I pretty loved it and quite interesting with twists and turns.
I really enjoyed the story and the narration especially the voice of the narrator because it made me imagine every single scene of the story, she's really an effective narrator. With that, I would definitely recommend this audio book to anyone especially if you're into something totally different. Thanks for this intense story book 'How to Date a Dragon'. I can't wait to see how the series grows.

The story is extremely surprising!

Loved it all around! The story extremely surprising and the storyline kept my interests. William's character is passionate, endearing, strong and very intriguing. This story is such a good start to a new series for me to read. Can't wait for the next in this series.

Loved the story and the sequel.

I definitely loved the story and the sequel. When Kelsey met William Drake she then experience and made her feel things she had never felt before. This man who made her want and desire things she had never desired before. Wonderful story line and the characters development are great. Can't wait to listen more from these authors!

I really don’t know what made me give this book a chance. I have never read romance, but this book is so much more than that. William Drake is so hot and very masculine in his ways, I pretty like his character and I could have done without all the sex scenes but they are few and far in between great story, great narration, and in depth characters.

For me it was perfect! The flow, the pace, the characters, the narrator. everything was perfect. Couldn't wait for the next one!!!

sensual but at the same time it was very romantic

I have listened to this books a while ago and enjoyed the story. The authors writes very masculine and it works very well with the story and also the narrator did a good job capturing the feel of the story. Some part of the story was sensual but at the same time it was very romantic. l closed my eyes while listening and I feel like I'm in the story in a corner watching everything.

This will leave you wanting more of these stories.

I've enjoyed the characters in this book immensely. Kelsey from being innocent and conservative turned into something different, her world was turned upside down because of this guy named William Drake. Moreover, characters are well developed and leave you wanting more of these stories. So if you are looking for something different this is the story for you!

This was a surprisingly great story.

For me, the storyline was good, the performance was outstanding, and the story was unpredictable. I listened to it all in one sitting, although I think this was a book I could also put down for a little bit and take a break too and no edge of the seat waiting for whats next. You will definitely love it as much as I do.