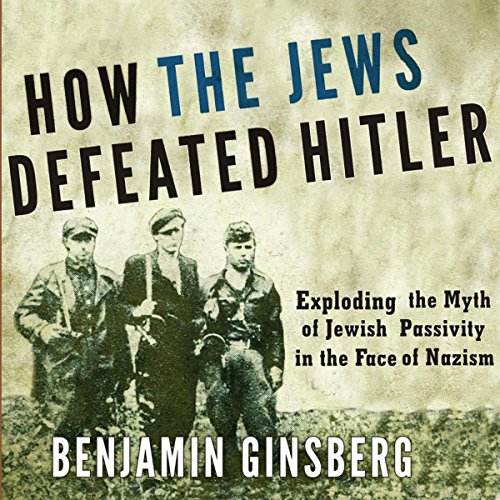 How the Jews Defeated Hitler

By: Benjamin Ginsberg
Narrated by: Marcus Freeman
Try for £0.00

One of the most common assumptions about World War II is that the Jews did not actively or effectively resist their own extermination at the hands of the Nazis. In this powerful book, Benjamin Ginsberg convincingly argues that the Jews not only resisted the Germans but actually played a major role in the defeat of Nazi Germany. The question, he contends, is not whether the Jews fought but where and by what means. True, many Jews were poorly armed, outnumbered, and without resources, but Ginsberg shows persuasively that this myth of passivity is solely that - a myth.

The author describes how Jews resisted Nazism strongly in four major venues. First, they served as members of the Soviet military and as engineers who designed and built many pivotal Soviet weapons, including the T-34 tank. Second, a number were soldiers in the US armed forces, and many also played key roles in discrediting American isolationism, in providing the Roosevelt administration with the support it needed for preparing for war, and in building the atomic bomb. Third, they made vital contributions to the Allies - the Soviet Union, the United States, and Britain - in espionage and intelligence (especially cryptanalysis), and fourth, they assumed important roles in several European anti-Nazi resistance movements that often disrupted Germany's fragile military supply lines. In this compelling, cogent history, we discover that the Jews were an important factor in Hitler's defeat.

The book is published by Rowman & Littlefield.

"Gives an unexpected and thrilling history of key, Jewish contributions to the Allied defeat of Nazi Germany." ( St. Louis Jewish Light)
"This is a fascinating story that has not been told in its full context until now." ( BookViews)
"This work will transform how scholars and the public view Jews and the Holocaust." (Stephen H. Norwood, University of Oklahoma)

What listeners say about How the Jews Defeated Hitler

No connection between title and contents of book.

It is a bad book with good intentions, but is a huge disappointed. and the last chapter is not even anything to do with the Jewish contribution in deafeting the nazis, very disappointing.

The majority of the book tells an informative set of historical narratives. Towards the end, though, it diverges into a screed about how the BDS movement and pro-Palestinian rights groups are all a bunch of anti-Semites. Could have done without that.