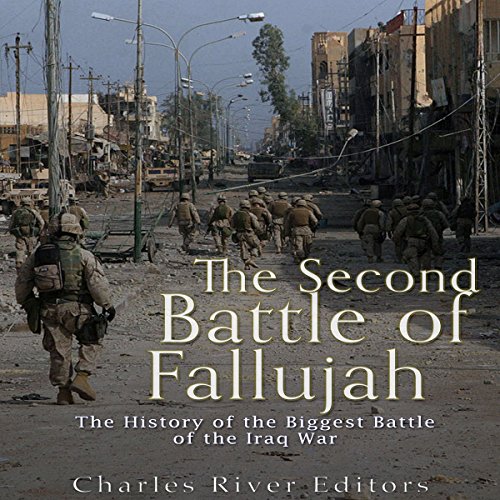 The Second Battle of Fallujah

The History of the Biggest Battle of the Iraq War
By: Charles River Editors
Narrated by: Colin Fluxman
Length: 1 hr and 30 mins
Categories: History, 21st Century
5 out of 5 stars 5.0 (1 rating)

The Second Battle of Fallujah

"I am scared to death that they [the war hawks in Washington] are going to convince the president that they can do this overthrow of Saddam on the cheap, and we'll find ourselves in the middle of a swamp because we didn't plan to do it the right way." - Lawrence Eagleburger, former Secretary of State

"Some of the heaviest urban combat US Marines have been involved in since the Battle of Hue City in Vietnam in 1968." - The US military's description of the battle

The city of Fallujah is located in Iraq's western Anbar Province, approximately 65 kilometers west of Baghdad, the country's capital. Its history, along with the history of Iraq (whose modern borders are part of what was once known as Mesopotamia), goes back thousands of years, and the country's modern history played a strong role in shaping the fighting in and around Fallujah in 2004.

Moreover, as the name of the battle implies, no description of the fighting for Fallujah is as straightforward as it may sound. In fact, there have been multiple battles for Fallujah over a span of many years, including Operation Vigilant Resolve in April 2004 (also referred to as the "First Battle of Fallujah"), Operation Al Fajr, and Operation Phantom Fury (the Second Battle of Fallujah, which commenced in November of the same year), the February 2014 capture of the city by the then-Islamic State of Iraq and al-Sham (ISIS, which later changed its name to Islamic State), and the 2016 Iraqi-led offensive to clear ISIS from the city. The most famous of these was certainly the Second Battle, but no history about the fighting can focus solely on the events from November to December 2004, which covered the beginning and conclusion of the operations.

There were some inaccurate or wrong statements. writer needs to do his homework, Title very misleading.