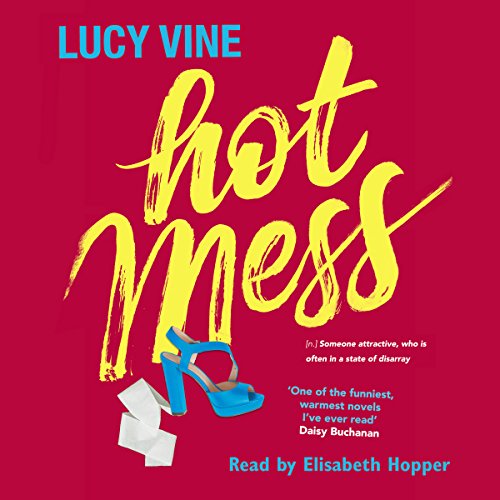 By: Lucy Vine
Narrated by: Elisabeth Hopper
Try for £0.00

Hot Mess [n.] - someone who is often in a state of disarray while remaining attractive in spite of their flaws and repeatedly finds themselves in uncomfortable predicaments.

Ellie Knight is just like you. Her life isn't turning out the way she thought it would. Some people might say she's a hot mess, but then who really has their s--t together before they're 30?

It's Valentine's Day, and Ellie Knight finds herself eating Nutella in the bar stock after a no-show date. But single doesn't have to be the loneliest number, does it? She goes back home to her flatshare and weird flatmates. It's okay there's black mould everywhere, right?

With a hangover from hell, she goes to the office job she thought she would have quit by now. Doesn't everyone hate their job? Maybe Ellie isn't following the official life plan, but perfect is overrated.

For fans of Fleabag and Girls, this is a fresh and funny coming-of-age story with a single-girl heroine that everyone will relate to - a modern Carrie Bradshaw meets Bridget Jones. Read by Elisabeth Hopper.

What listeners say about Hot Mess

This is THE BEST audio book I've listened to!

Anyone 25-35 who isn't rushing to get married and have children will totally relate.

Her dads books was possibly the best thing I've ever heard. Even my boyfriend thought this book was one of the best he had heard - proving how non chicklit/fluffy it was!

made me laugh the whole way through

The performance was excellent. It's nice to read a book about a woman who's purpose in life isn't just to find a man!

I identified with this a lot as we are around the same age and it's of the current time. It's LOL funny, the narrator especially. The only irritating parts were the 'novel' that was read out, I skips those parts. All in all, realistic and hilarious

Fun storyline, don't have to pay too much attention

The sense of humour and positivity.

Have you listened to any of Elisabeth Hopper’s other performances? How does this one compare?

I hadn't listened to Elisabeth Hopper before, but enjoyed her performance.

I didn’t bother going past the first few chapters as I couldn’t get engaged in this book. It is trying far too hard to be funny to the point where it’s not, and has clearly been modelled on Bridget Jones - in fact I think the author has actually ripped off parts of it e.g. Bridget’s annoying boss.

Funny and modern with some poignant bits too!
I'm looking forward to the next book next year.

Funny, witty but emotional too...true to a modern ladies life! A great book for any time.

What made the experience of listening to Hot Mess the most enjoyable?

People around me must have thought I was mad, listening to this book made me burst out laughing many a time. And for the other part I had a smile on my face. This is a feel good book and the narrator was excellent!

Really great reading for those who are tired of princess fairytales and cliche romances. Funny and thought provoking.

Great story.... engaging from start to finish so relatable and had me laughing out loud!!!! 100% would recommend for mid to late 20s on edge about turning 30