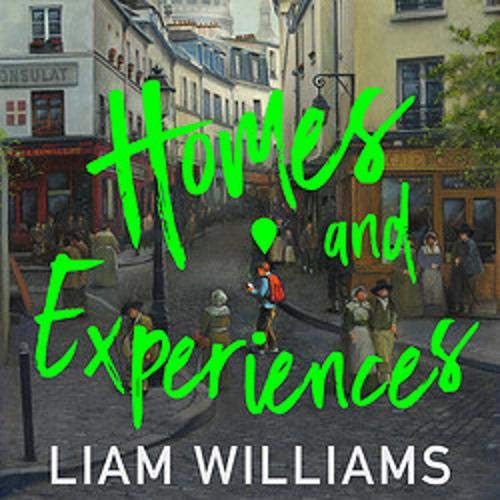 This audio edition read by the author, comedian, writer and actor Liam Williams

Mark is going on the trip of a lifetime: a summer touring Europe in the pay of the travel company he works for.

For his plus one, he turns to his idolised cousin, Paris. Everything Mark's not, Paris is a man of the world with a thirst for adventure - even his name is better than Mark's.

But after a catastrophic argument, Mark finds himself setting off alone on his voyage, instead emailing an unresponsive Paris from the road. A cocktail cruise on the Seine, mindful pastry making in Foix, a graffiti tour in Barcelona: Mark will be forced to engage with life and strangers as he never has before, with poignantly recognisable results.

But questions remain: will he ever be able to have an authentic interaction? Will Paris ever reply to his emails? And crucially, will he manage to write SEO friendly copy for every place he visits?

After all, it's not the destination that counts: it's the homes and experiences you encounter along the way.

"One of the finest comic minds of Generation Y." (The Times)

What listeners say about Homes and Experiences

Having long been a fan of all of Liam Williams work, I was very hopeful, and even though I have felt that some mediums suit him better than others, this is the perfect match.

This novel is well researched and fully immersive, yet the easy-to-digest storyline is effortlessly absorbing. The plot unravels with ease, allowing space for you to explore the tangents and intricacies. The whole cast narrates the characters flawlessly, which are very funny, relatable and naturally human, the normality of which help create these unstated, yet poignant, moments.

This story has a lot of empathy and certainly well worth investing in.

The writing is rhythmic and entertaining.

Fantastic first half, with a drop in quality second half. Also a (personally) irritating second half addition

I first found Liam Williams’ material during Lockdown - which seems so long ago. Since then I’ve became a mammoth fan of of his. Ladhood and Pls Like are wonderfully comedic and it was with great relish that I looked forward to devouring this audiobook.

I fond that a strong first half was severely let down by a second half which contained an extremely predictable B Plot that you could see coming from half way across Europe. Plus there is a second voice in the audio book about 2/3 of the way through which I found grating in the extreme.

Being Glaswegian I’ve had my accent attacked and feel a bit bad about conducting a hatchet job on this. Suffice to say that it’s an extremely irritating South East English / London accent with an abundance of T-glottalisation so bad and pronounced that it pulled me out of the narration so hard that by the end the experience audio experience was near enough ruined.

Saying that it is a passable story, I look forward to the author building on this novel and hopefully employing better more competent voice artists to read along side him. Liam has an excellent voice for narration and is like to get a considerable amount of voice work once Stephen Fry shifts off this mortal coil.

I absolutely loved this book - easily my favourite audible download.
Liam Williams writes so beautifully- a great balance of poetic descriptions of places and events, interspersed with great humour and poignancy, delivered in his calming and down to earth Leeds accent.
I hit the 'extend sleep timer' so much I had a few days of utter exhaustion at work as the content was so captivating. One night where a bout of insomnia was indeed welcome to keep up with the adventuring across Europe.
Great ending although sad there wasn't more, but struck the right balance with the tone of the book.
Can't wait to hear more of Liam Williams writing in the future

Wonderfully read, it's an interesting story that has a nice, unexpected reveal. Includes some laugh-out-loud moments (for me at least!).

This story told through email is a witty travalogue, account of a summer travelling through Europe. It is unconventional and contains many surprises along the way.

I laughed my way through this, I loved it so much. It's so refreshing to read/listen to something imaginative, evocative and insightful, which comfortably explores broad swathes of modern culture from the insanity of the creative workspace to deep into the inner workings of european cities. While being just funny ! it's a funny book lol. Cannot recommend more highly. And beautifully read.

Liam Williams is a hugely talented writer and performer, and I absolutely loved this auditory book. The story that unfolds is brilliantly well told, and you’ll end the book feeling that you’ve spent the last few weeks travelling through Europe as Mark’s virtual ‘travel buddy’.

Highly recommended during these times of restricted travel opportunities - and beyond!