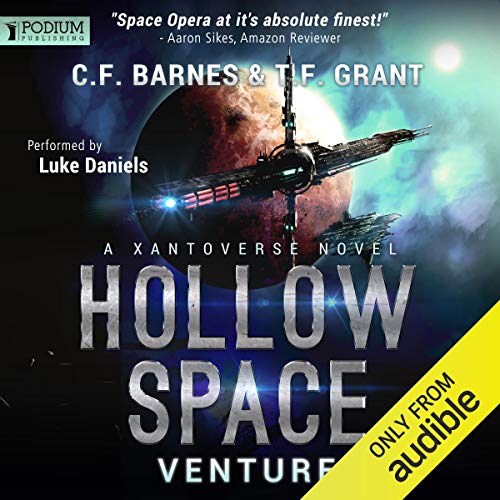 Forced to hyperjump during a brutal ambush, Sara Lorelle, navigator of the Venture, the last human colony ship, discovers a terrible truth: They've jumped to somewhere that shouldn't exist.

Trapped inside a pocket universe known only as Hollow Space, where technology inexplicably fails, Sara and her crew have to face the lethal politics of their only destination, Haven - a decrepit station, home to deadly aliens and rival factions that soon sees the Venture crew up to their necks in danger.

With their only hope placed in Tairon Cauder, a reckless scoundrel, they will battle impossible species, confront their fears, and uncover ancient and terrible secrets. In a place where those who shoot first live the longest, the Venture crew will have to push their limits if they are to save themselves and the human race from extinction.

This was a pretty interesting series beginning. It reminded me heavily of the sic-fi series Firefly, and had elements of all the famous Battlestar Galactica, Babylon 5, and Star Wars series as well.
When all is said and done, I thought it was a good start to what will probably be a decent trilogy or series.

The story begins with a colony ship making an emergency jump into hyperspace while trying to escape the species that has essentially exterminated the human race (or so the human characters believe…). The ship finds itself at a strange destination in space with most of their ship’s electronic systems inoperable. Theirs becomes another one of thousands of ships in an enormous space scrapyard, full of ships that suffered the same fate. The only refuge is a truly gigantic space station filled with dozens of diverse alien species. The society that has developed is controlled by money, cheating, fighting, and salvage.

The Babylon 5 reference, again, comes from the fact that most of the story occurs on an enormous space station filled with aliens. The Galactica aspect is seen with the crew fleeing their (supposed..) sworn enemies out to exterminate humanity. Another review compared this book also to Star Wars, and I think that has some merit too… There were a lot of diverse lifeforms (including giant dog aliens, space dragons, and monster hornet things that live in space), kind of like Star Wars.
The author did a great job incorporating many of the elements of so many other series and storylines, but still keeping the story original.

The book is full of action, fighting, shady deals, and tons of twists and interesting developments. It was by no means predictable, and I never found myself board while listening.

The narrator wasn’t bad, but he seemed to be trying to put a little too much enthusiasm into his voices for some of the characters, and there were times I had a hard time distinguishing which character was speaking. I gave the narration 4 stars, but to be honest he rated more of a 3 or 3.5.

This was an interesting and entertaining book and well worth the credit I spent. I will definitely buy the next in the series when it is released.

This was a really good listen. Love the characters. Can't wait for their next adventure. Hollow Space is an interesting concept. I recommend this book to all who love adventure.

The book borrowed way too many cliches and characters from other stories, movies and TV shows. The cast and crew were cartoonish. I barely got to chapter 8 before I wanted to strangle Tai and Bookworm. Despite my admiration of Luke Daniels I'm done. Not for me. Sorry.

Great book without an end

I loved this book and halfway through wondered when book two was coming only to find out one author died before that was possible. Sadly the other author stricken by the loss of his friend and co author decided rather than put out an end to the story that might not be on par with this book, to not try at all. While I understand his position on the matter the fact is the story had no end and as such lessens the quality of this book.

In essence this is not a series it's a book without an end and if that will bother you don't waste your time. However, if you enjoy thinking up your own ends to stories this will likely be good for thought.

loved it! sad there won't be a sequal :(

great story, great chars, doesn't take itself too seriously. sad there won't be a sequal but I understand why the author chose not to write one from his blog.

Characters were interesting enough to keep my attention. Lots of action. Sort of reminds me of the seedier side of Deep Space Nine with the space station back ground and the wheeling & dealing (Quark's). Also a bit of Han Solo in Tai. All-in-all a pretty good romp.

I can imagine that there will be a lot of people who'll love Hollow Space, but for me it was a disappointment. The best way I can think to discribe it is like mediocre fan fiction of a Battlestar Galactica and Guardians of the Galaxy mix. It's as if the authors really love shows and movies in those veins of science fiction and decided to write a book combining them. If you like shows and movies like that and you don't mind amateurish writing and not so great dialogue then you'll probably enjoy this.

The reason I got this audio book is because it's read by Luke Daniels who narrated the Magic 2.0 series. I thought he did a great job on those books, and wanted to hear more from him. He performs his heart out in this book too. However, it may have been over performed. He does some of the best voice work in the business and he's consistent, but some of the voices here felt a little over the top and were a little distracting.

The story was also just alright. I know many listeners will disagree with me, but there was nothing here that grabbed me. I found a lot of it to be silly and parts that were ment to be shocking or intense were not. I also had a hard time staying focused despite Daniels's exuberant performance. My mind wondered a lot and I would end up confused and have to back up a few minutes to figure out what I missed. Sometimes, I'd get confused even when I was paying attention.

Keep in mind that this is just my opinion. If you like cheesey characters and corny stories this may be the book for you. At the end of the day it's your money/credit and it's your choice. I say, happy listening.

Please check out my new website to read my other useless reviews at unhelpfulreviews.com... Thanks.

i didnt really like most of the characters at the beginning but they grow on you. Great pacing with no real slow points and just the right amount of info on the different characters to keep me interested in them as individuals. i picked this up at first because Luke Daniels was narrating but i'll get the second one because i enjoyed the story.

Great story brilliant narration as always by Luke Daniels, can't wait for the next book will be looking out for it

Interesting story and characters. I can't wait for more. A good solid book to enjoy. Worth a listen