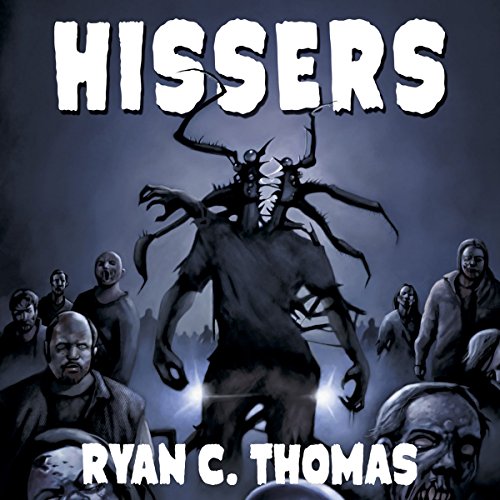 By: Ryan C. Thomas
Narrated by: MacLeod Andrews
Try for £0.00

It's the last weekend of summer break in the small town of Castor, and four teenage friends are about to attend the most popular end-of-summer high-school party in town...with a massive wave of mutated undead about to crash the party. It's The Breakfast Club meets Resident Evil as the teens of Castor fight to stay alive.

What listeners say about Hissers

hissers wasn't written by stephen king, but it felt like a vintage king novel- stand by me meets 28 days later. not only do a group of 4 14 year olds have to confront an outbreak of re-animated dead, but they also have to contend with teenage angst! but don't let that put you off! that adds to the power of the story telling.

connor is a good-looking soccer player. his best friend, seth, is an overweight nerd, who's picked on b/c of his weight. they share a love of video games and all things geek. their star trek snd star wars references go over the heads of the girls. connor's and seth's relationship is getting complicated b/c connor is starting to get popular, and seth feels like he's getting left behind.

the 2 girls in the group are nicole and amanita. they too are best friends and polar opposites. nicole is the skinny smart girl while amanita is the quickly developing girl.

all 4 have different backgrounds that are flushed out as the story progresses. the story begins with them discussing the big back to school party. nicole and amanita are invited while connor and seth plan to hang out in the fort. nicole has a crush on connor and talks amanita into stopping by the fort before going to the party. while the 4 of them sip on some booze amanita brought, a plane crashes into the houses below.

the plane is carrying a doctor who is supposed to be showing her samples too the big wigs in washington. the dr has developed some kind of ra serum that would allow amputees to attach other peoples' limbs to their bodies w/o rejection. however, the chemical cocktail has some unforeseen side effects.

when the 4 teens run down to see if they can help, they encounter their first reanimated dead person from the plane, and the action really picks up.

the action is frenetic with well-timed pauses. there's a lot of gore. the story is smart and unique. the characters are well-developed and memorable. i thoroughly enjoyed this story. not only is this a good zombie story, but it is also a great coming of age story.

This book had me really surprised when I found out the main character was going to be a 14 year old boy. I’m not into the Harry Potter teen main character books. I have to say I was really surprised. I thought it was well written and deserves a listen. Original story with creepy creatures that were easy to visualize. One of the girl main characters had me rolling my eyes a little. At 14 with the supposed knowledge she had she should be out of high school not getting ready to start. Small annoying part to an overall good book. Very new way to come at this theme. Nice job I will listen to another from this author.

Such an unexpected awesome story. Hissers is heavily indebted to Stephen King. I've read almost every one of King's books. The story telling is fashioned in vintage 70's King style. And the characters could exist in any King novel. But this is a step beyond anything King ever wrote.

The story drags at a couple of points but only for a short while. The character development is very strong, though I felt that some of what the youngsters were internalizing was beyond the age Ryan Thomas set for them. & lastly, I have a little beef with the Hissers themselves, the story played with the abilities of the creatures in a way that made them seem too convenient depending on the plot needs.

in the end, this is a book you HAVE TO PICK UP AND READ. Or should I say, LISTEN TO.

Loved this one. As I've said in another review, I'm not usually all that interested in zombie stories, but after reading a few good ones this month, I may have to revise my thoughts on the genre. This one started out as seemingly a young adult story, but as the zombie presence grew in the story, it quickly intensified to a true adult horror book. The characters were all quite well built, and as an author, I couldn't help but to take character-building notes from Mr. Thomas, as the four main-characters all had their flaws and heroic points to make them quite likable. The story is quite bloody and violently graphic, but that's to be expected from a tale of zombies. These aren't the old, slow-moving variety, but fast-moving and evolving creatures, which means no one is ever safe. If you're looking for a good zombie book, or a horror story in general, give this one a look.

As for the narration, I think the narrator did a great job of changing up his natural voice to give the characters distinct sounds, especially the four teens. They weren't much different from one another, but different enough that I rarely needed the voice tag to tell who was speaking. I always like that.

One final thing about this that I enjoyed: There was a short story on the end, and it, too, proved to be a pretty neat zombie story. It had a neat twist (which I, of course, won't spoil for you), and an interesting premise all the way through. So after you finish listening to Hissers, listen to the final hour of the recording to hear this story.

Zombie apocalypse with a teenage twist!

Any additional comments?
Hissers is a magnificent and horrifying tale that is well written and excellently produced. Macleod Andrews does an outstanding job with the narration. It is a fresh and exciting variation on the zombie genre told from the point of view of a group of kids trying to survive an undead apocalypse. One of the wonderful and very scary elements is that the kids are all believable – the way they talk, their interests, the angst – and this adds a kind of realism to this story that it needs to survive. The reader is drawn in to the characters as well as the story.

Frighteningly, we know from almost the beginning that none of them are safe. Nobody is safe! I found myself on several occasions saying RUN! HIDE! GO! No, not that way! Which is what I love in a great horror story.

This is a great, scary read that I highly recommend

I wasn't expecting a lot from this one, but it ended up surprising me. I think a better comparison would be 28 Days Later meets Super 8, with a bit of Resident Evil thrown in for good measure. I really became fond of the characters and the way they grew in the book. There were one or two loose threads at the end, and the narration had the usual problem of an older reader attempting to do younger voices, but neither of these were enough to detract from the overall story. The "bonus" story at the end didn't really do a whole lot for me, but I look forward to more by Mr. Thomas, hopefully involving these same characters.

i really enjoyed this book. great story, very well read. rather gory, but some good old zombie fun (spoiler: these are fast, 28-days later, style zombies, not your classic shuffling undead). as a zombie purist i have issues with this! but a really good listen. unusually for zombie novels, the characters are very well developed, in fact we spend the first hour or so, just getting to know them. although the protaganists are all 14 years old, as a forty-something i still enjoyed it.

set up for a sequel which i am really looking forward to.

the bonus story at the end was also great.

after a bad run with audbile recently about the quality of some of their stuff and the length of their samples, this was overall a very good experience.

get it. you wont regret using your credit

This was a great performance of disturbing content.I suspect Ryan C. Thomas is either a murderous pedophile or fantastic writer of the dark sci-fi.If he ever has children its o only because he removed their parents somehow.I didnt appreciate the description of a baby's dissection or the "heroic" death of a bullied chubby teen. (spoiler alert btw)
Other than the child murdering fantasies, it was a well written horror sci-fi.I plan on sharing with ex-gfs, former employers and Child Protective Services.(somebody has to worry about unsafe children!)The virus/contagion has amazingly creative side effects, some "handy" , some literally "bringing everyone together". (rimshot)

I'm really thinking this is between 3 and 4 stars. The story is pretty much your run of the mill zombie scenario. What I thought was really well done is the portrayal of the story from the perspective of 14 year olds. These junior high kids are at the early teen emotional level and really react like a 14 year old would. The emotional reactions were very true to life...innocent and naive. The storyline could easily been modified to be any localized disaster. This really is more of a survival story told from a juvenile perspective. It's interesting and action packed. Not too deep, meaningful or scientific... Worth the read for fans of Michael Grant's Gone series.