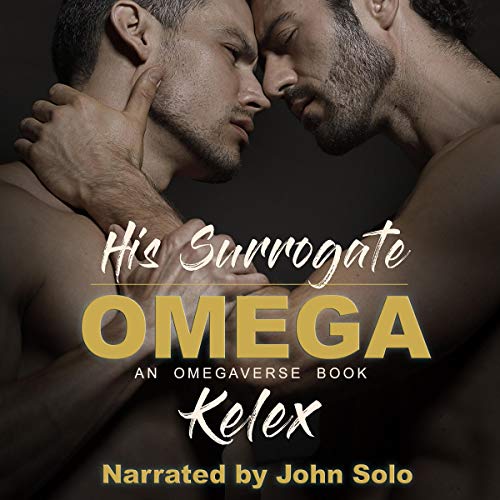 Omega Gray Tomlinson is positive he’ll remain unmated for the rest of his life. By his mid-thirties, he remains unclaimed and without prospects and lives confined to the Omega Quadrant, where he’s sure he’ll end up dying alone.

When his older brother Silver and Silver’s alpha die in a tragic accident, Gray’s nephews come to live in his little sequestered world. Without an alpha, he knows he has little means to help support the boys. The only choice he can stomach is to offer his services as a surrogate.

The minute Gray meets Jamie, the infertile omega who so desperately wants a child, he senses a bond like none he’s ever felt before. It’s brotherly love at first sight, and Gray decides Jamie is the one, agreeing to carry his and his alpha Rohan’s child.

But when circumstances change, Gray is faced with new challenges, a new love interest, and a battle for the very life that grew inside him. And, maybe, there’s an alpha out there for him after all...

What listeners say about His Surrogate Omega

Simply spectacular! His Surrogate Omega is one of the finest omegaverse stories I've ever read. Well, I should say listened to, because I had the supreme pleasure of listening to John Solo narrate this one.

I've lauded Mr. Solo's skills over and over, so please bear with me again; his performance in His Surrogate Omega is magnificent! This is a highly emotional story, a real heartbreaker, and I broke down and cried four times over the course of the story. The feeling that Mr. Solo brings to these scenes enhances everything about this story. Do yourself a favor and experience this novel in audio - it’s 100% worth it!

Kelex builds a fantastic world here. I just enjoy these kinds of stories so much more with great details and explanations which make sense. The characters, the relationships, honestly just everything about it, His Surrogate Omega is absolutely incredible.

this was sexy and amazing.. kelex does an awesome job with this new series.. the characters are brought to life by john solo and made me super happy. i loved it!

Make sure you are stocked up with Kleenex

This is a new to me author and His Surrogate Mate was a beautiful story to be introduced to them with.
This Omegaverse storyline is full of sadness and joy so make sure you have plenty of Kleenex at hand.
Whilst this is a stand-alone with a HEA there is scope for further books to be written with the supporting characters taking the lead and I hope this happens. I certainly will be looking out for them.
John Solo did an excellent job narrating.

Prepare for an emotional rollercoaster!

Prepare for an emotional rollercoaster and bring lots of tissues with you! This is my first book by this author and wow... I’m rendered speechless! I love how John Solo brought these characters to life! This book literally broke my heart and put it back together. A truly beautiful and emotional story!

This book is long but So So So Good. I would buy it again. it does have sexy scenes but honestly it's more of an emotional read with a great story/an awesome plot and great characters. And the narrator was fantastic. he expressed so much emotion, I actually cried several times because I could hear the trembling in his voice or feel his whispering words in my ears. I cannot wait for the next one to come out, I will buy it immediately without question if it's going to be anything like this one (and it totally should since they laid the foundation for the eldest nephew to get his own book next).

When Gray decides to become a surrogate to help out his family he never expected the chaos that comes into his life. The couple that he helps comes to mean so much more to him than just a job. Jamie and Gray find a bond that only grows stronger as they spend time together and his relationship with Rohan the alpha takes an unexpected turn. How will Gray find the strength to leave not only his child but also the two men who have come to mean so much to him once everything is over?
This story is one big emotional ride. There is so much pain and love throughout this book. Gray, Jamie and Rohan go through so much and find their relationships changing and evolving. Love has no restrictions and everyone learns this the hard way. The author has woven a beautiful story with strong characters that has you rooting for a happy ever after.
Narrator John Solo does a wonderful job of bringing life to these characters. It is a powerful and emotional listen. So much so that it will bring tears to your eyes as you feel the pain that they go through. Your heart will ache and soar as you listen. Not only do we get a great story with the main characters but the supporting characters are just as strong and have you eager to hear their stories.

One of my all time favorites

I read this gem when it first came out, and cried my way though falling in love with Jamie, Gray and Rohan. This story has real depth, and sucks you in heart and soul. The performance was just as powerful. I can't wait for more from this universe.

Narrator John Solo captured every kind, gentle, and sentimental nature of this end-of-life tender hearted omegaverse romance. He beautifully portrayed the deep emotions which go hand in hand with emotions experienced by terminally ill patients prior to death, and people who have lost a loved ones, wherein the five stages are: denial, anger, bargaining, depression and acceptance. Bring your tissue box, you are going to cry!

Other than the fact that the main character is dying, he is also searching for another omega to replace him, to support his alpha during the grief process, because it is known that when one mate dies, the other soon follows.

The author has managed to create a magnificently built world with strong primary and secondary characters.

The reason I’m so besotted with this specific omegaverse, is the extra time the author has put into the details for example; we hear history, the politics the science and biology behind this world. It is not just accepted that the listener should know where omegas come from and what their world look like. For listeners to understand omegas and the fact that they have babies, this is one of those books that will make sense and make mpreg totally believable.

This audiobook is definitely a re-listen and I will nominate it for a Blue Encore 2020!!

Kelex at her BEST! John at HIS Best!

Ahhhhh, so it's no secret that I LOVE THIS STORY. It's Kelex writing at her very, very best, and I just absolutely was blown away by this story when I first read it.

Now, John Solo has brought this emotional story to life - and OMG, you guys will need tissues. I don't know how you can't be impacted by the emotional peak in this story.

I love the world building that she has created with this, the society and setting for alphas and omegas, and I loved the friendships, the connections, and the crazysexyhotsteamy romance as well. HIGHLY recommended!!

This book was an emotional rollercoaster from start to finish. I don't think I've ever cried so much.

Amazing!
If you read this book, you have an emotional journey ahead of you... get the Kleenex ready, curl up on the couch with you favorite warm beverage and enjoy the ride. And I definitely recommend you reading this book.

I fell in love with the characters and felt their story deeply.... I was engrossed in every moment and didn't want to see it end, loving every moment. It was sadness, it was joy, it was sweet, it was raw... it was perfect! Jamie, Grey, Rohan... these characters are well written and claim your heart... the supporting cast of characters are interesting and will leave you wanting their stories too. I am anxious for book two.

John Solo is the narrator of this book. And does a phenomenal job bringing the story to life and giving the characters' personalities a chance to shine. Great voicework and clear recording.

Wow! John Solo takes this book to the next level!

When I first read this on Kindle, I cried all the way through it. That’s how talented Kelex is as an author and a storyteller. Listening to John perform it though, definitely hit differently. Listening to the narration is fantastic! I cannot wait for the next installment in this series, hoping John performs it as well.

If you like where everyone feels guilty about everything and the only progression of the main couple getting together is because of a death this is a story for you. The side story is the most interesting part of the book! But it's not explored except for like two chapters at most . Great narration though !!