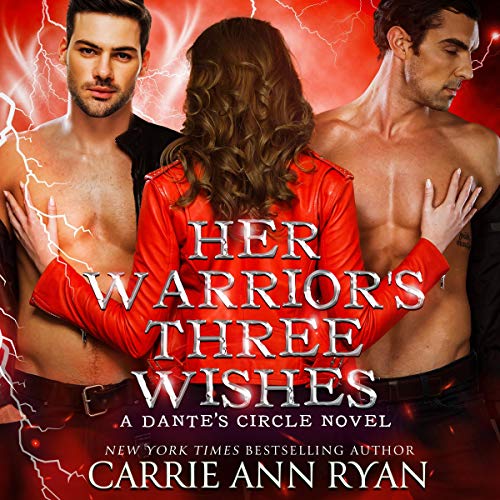 Humans aren't as alone as they choose to believe. Every human possesses a trait of supernatural that lays dormant within their genetic makeup. Centuries of diluting and breeding have allowed humans to think they are alone and untouched by magic. But what happens when something changes?

Ambrose Griffin is older than most, if not all, civilizations. As each year passes, he submerses himself into his training, only relaxing around his protégée and friend, Shade. After losing his wife and children in the last Angelic Wars, he guards his heart and has no desire to share it with another.

Bookkeeper and romance novel enthusiast, Jamie Bennett dreams of being swept off her feet by a white knight. However, her life is no romance book. Since meeting Ambrose - a sexy, delicious angel - she's been twisted inside out and doesn't know why. Things are happening that she can't control, and now her life is in danger.

Balin Drake is stuck in hell, literally. His life of refusing to take souls, even though it's part of his demon nature, has caught up with him. He's dying and now must search for his true half, but even a mate may not save him. When he meets the two people who could fill that part, he'll need to fight for something he hasn't felt in over a century: hope.

Warning: Contains a rigid angel who needs a certain sexy woman to help him unwind, a book keeper who finds herself the creamy center of the best cookie ever, and a demon who has a certain taste for pressing them both against walls.

What listeners say about Her Warriors' Three Wishes

The second book in the Dante's Circle series, a fantastic read that made me want to check out the rest of the series featuring some all alpha male, tortured warriors. This book introduces book shop owner, Jamie, who needs to connect with her 'other half' to change into her supernatural being. Ambrose has been avoiding Jamie for a year, before he can put things right, Jamie is kidnapped by Ambrose's enemy, Pyro. Great narration by Gregory Salinas.

This book was fun to listen to!

I absolutely loved this book. It is the second in the series and it definitely has me ready for the 3rd.  I feel that I'm missing something with this book. I wish I was also given the first book to understand the book a little better. BUT that said this book... (Big Breath In) OMG YAAA! This was an amazing book. I love how a demon and a woman teach an angel it's ok to love and not be scared, I also loved how the angel and woman taught a demon it's ok to be who you are and not take blame for who his father is. I like how they befriended another demon and told him that they would be there to help him when he was ready and how they saved another innocent from hell. Her Warriors' Three wishes was a good book for a great listen. It was hot, passionate, filled with action, and sweet.

**I received this audio book in exchange for an honest review.**

I Loved this book. It is a well written story. And it is narrated amazingly.

so glad I listened...

I wasn’t sure how I’d like this book, I haven’t listened or read supernatural books in quite some time. I am so glad I happened upon it. Sexy and Steamy and a really unique story! Loved it!

Such a good read

I'm so glad I decided to pick this up. Now I feel like i need to binge read the entire series.

What a hot fabulous book

I wouldn't mind being sandwiched between angel and a hot demon. This storie was a good listen from the beginning to the end. The narrator was great, This audiobook was given by the author, narrator, or publisher at no cost in exchange for an unbiased review via Audiobook Boom.”

Carrie Ann Ryan entices, temps and makes the reader melt with the amount of heart and heat in Her Warriors Three Wishes.

Her Warriors’ Three Wishes is my favorite Dante’s Circle series book. I am also a sucker for a good ménage. I love Balin. He’s a rebel among his kind. He also had this innocent nature with his naughty ways. I found him unique. Ambrose had it all and it was taken away. Making him reserved and even coming off as a bit of an ass. Jamie puts herself out there and doesn’t give up. Even when her true nature is revealed she keeps her head high.

Carrie Ann Ryan puts the reader in the middle with an angel on the left, a demon on the right and they’re both talking dirty in your ears. Holy hotness. Gregory Salinas sultry narration takes readers on this sexy and suspenseful, fast paced story that will have your ears turning red. I love the combination of all the different paranormal elements. The characters are fun, feisty, and well developed. Her Warriors Three Wishes is a wickedly naughty listen.

Still my favorite series by far

Dante's Circle is by far my favorite series by Carrie Ann Ryan. I eagerly awaited for Dante's story from the very beginning and I was not disappointed. Already owning the book in digital format, as soon as I realized it was available on audio, I had to pick it up so I could listen to it in the car or while I was on the treadmill.

Once again Gregory Salinas did a phenomenal job with his narrative

After Lily and Shade have settled into their new life as a couple, Lily's friends are still on hold. Jamie Bennett is waiting for Ambrose Griffin to accept his place as her mate, if only to stop the effects of being in transition from human to paranormal creature. Her growing pains are slowly driving her crazy. When Ambrose's worst enemy, Pyro, kidnaps Jamie, she finally finds the one person who could tip the scale in her favor - Balin. As Pyro's son, Balin doesn't think he will ever find his other half, but with Jamie and Ambrose he becomes complete.

If you're looking for a love story that transcends worlds, races and hate, this is the story for you!

I really love the rich, colorful characters Carrie Ann Ryan created in this book. When she described Hell, I could feel the heat and desolation of the Realm. Each character within the Triad was different and unique yet in their own way made it whole - complete.
I truly love how much detail Carrie Ann Ryan puts into her characters as well the adventures they go through. You don't feel like a vicarious reader, you feel as if you are experiencing the action, the love, the heartache – all of it right with the characters you are getting more and more invested in – the further you get into the book.
As I stated in a previous review, I am very new to audiobooks. However, I am extremely impressed and amazed at how versatile the narrator Gregory Salinas is throughout the book. He is amazingly talented to be able to give justice to the growly alpha males we love; and then soften his voice for the equally adored heroines we are rooting for throughout the book!
Another amazing experience from Carrie Ann Ryan and brought to life by Gregory Salinas! All I can say is MORE MORE MORE!

Carrie Ann did it again with this one. Jamie was left for a year and then in one fell swoop goes to Hell and meets a wolf shifter who saves her, her angel cones to rescue her and her other half is a demon, when they claim each other she finds she is a d jinn and they end up saving eachother plus Hunter the wolf shifter. now to save the world again