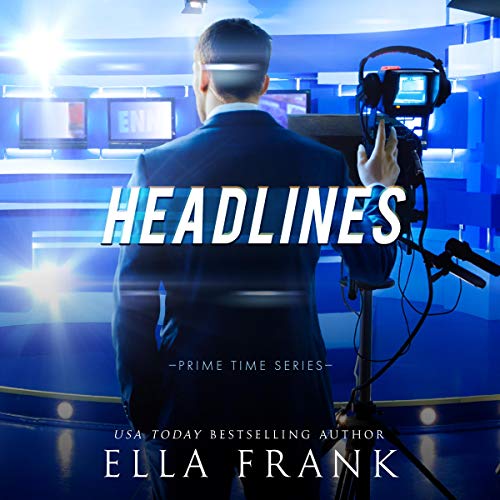 If I had to describe Sean Bailey, it would be as the sexy, caring, wonderful man I’ve gone and fallen in love with. I never could’ve imagined a world where he was my everything. But with each passing day, the connection between us grows stronger, and the idea of a world without him is something I can’t imagine.

But Sean’s love doesn’t come without complications. As the older brother of my lifelong best friend, this new love has caused relationships to break down and communication to become stilted, and the one question that remains is: Am I willing to give up the love and friendship of one for the chance of love and forever with another?

I didn’t mean to fall in love with Alexander Thorne, my brother’s ex and the number one prime-time news anchor in the country. I mean, no one could’ve seen that coming - least of all me. But that’s exactly what happened over these past couple of months: I fell in love.

That’d be complicated enough, I suppose, but Xander? Well, he fell in love with me too, and while it’s caused some major upset in the dynamics around here, I have to believe that a love this real can only lead to somewhere amazing.

This thing between us started out as a job, a friend helping out a friend. But after playing the role of Xander’s boyfriend, I find myself wanting the job full-time, because neither of us are playing anymore.

Headlines is the final book of the Prime Time Series and should only be listened after book one, Inside Affair, and book two, Breaking News.

What listeners say about Headlines

4.75 Stars! If you haven't read/listened to the previous two books, be warned that this review might contain spoilers. I fell in love with Xander and Sean in Inside Affair and that love grew with Breaking News and now with Headlines. Despite the fact that Sean hadn't been with a man before Xander, the transition was very smooth, yet realistic. They were just inevitable, so well-suited for each other and it was refreshing that aside from a small stumble in this installment, they handled everything thrown their ways with maturity. Of course, the fact that they had scorching chemistry didn't hurt matters. ;)  My only niggling with this book was that I felt that the whole thing with Bailey lasted a little too long and that he didn't even seem like the same Bailey we've gotten to know. I got that Bailey felt hurt, but his reactions were too OOC.   Charlie David did a fantastic job with the narration. His voice is so pleasant and he gave each character a distinctive tone. His narration made what already was a great book into an outstanding audiobook. All in all, this was a fantastic, emotional read, and that epilogue was the best thing ever and left me crying tears of joy, even the second time around. Ella Frank has a way to bring characters to life for me and make me fall for them as hard as they fall for each other and I can't wait to find out what she'll have in store for us next.

Headlines is the last book in the Prime Time series and I just can say that Xander and Sean are one of the best couples I ever read. Ella did an amazing job bringing these two together, Xander and Sean are the proof that you can find love where you least expect it. We read heartwarming moments between these two that make my heart so happy but also sad and heartbreaking when Sean is trying to salvage Xander and Bailey friendship but Xander won’t accept that and make Sean understand that He also is important to him and is worth his love and can’t choose between them, they work every day to make his relationship strong. Damn Ella you can make sexy times explosive!!! These two have a great chemistry and each time Xander and Sean are together we have some melting streamy moments...uuuffffff!! I like Charlie David performance he did a great job narrating this book, I like both Sean and Xander voices. I highly recommended this audiobook!

Can't wait for the next

Great way to end the series. Each book gets better and better, and Charlie David is the perfect voice to bring them to life. Xander and Sean are swoon worthy in all the best ways. Just when you think you can't fall in love with them more; you do. Love the tone and flow for each scene and can't wait for more.

This is a real sentiment when you're reading the final installment of any Ella Frank series and this one is just that. Here's the conclusion of Xander and Sean's story. The thing with audio books, when the narrator is great at what he does, it adds more to the experience when you're listening to the story. I have to be honest, Charlie David is so good with his narration that it really makes me wanna kick Bailey's backside for behaving like a juvenile throwing a tantrum. LOL. I love Xander and Sean's story and I love it even more on audio. There's angst, but there's also pure devotion towards each other. These two are SO hot together. I'm so happy with how the series ended. And as always, I want more because Ella Frank always makes you want more of her men!

Still a bit of emotional tension in this book. There also a few steamy scenes. Two things I would like to have understood better. 1. Why is Sean so comfortable with a complete about face in sexuality. He doesn't seem to question it at all. That isn't an impossibility, but most people have a bit more of a 'gut check'. 2. What is Bailey's problem. His actions seemed a bit out of character to me based on his character portrayal in his own book. Questions aside I enjoyed the book, and narrator is one of my favorites.

Headlines is a bittersweet story for me. Its the ending of Dick (snickers) and Anchorman's unusual and wonderful whirlwind romance. I don't want it to be over and yet I loved the ending. I thought terrible thoughts about Bailey throughout this book. His behavior while understandable was absolutely maddening. Ella Frank gave me another happily ever after to smile about.

I going to start off admitting I didn’t do a separate review for each section of this story. I did give the previous 2 stories a 5 star rate though. Figured I would save my overall review for the last book. I love Ella Frank stories. Xander and Shawn story was pretty good. The stalker and then how these two ended up coming together. The hurt and jealousy of Bailey. I kind of felt there for a short minute that Boudreaux was maybe a little happy at first of the rift between Xander and Bailey. But came around. Love that older characters were brought back as well. Though It’s been a little while since I listened to Bailey and Boudreaux story and I think I need to refresh my memory on how those two where introduced to each other. Now I’m wondering if baby brother is going to get his story and which way he will be taken.

When I think that I can't love Xander and Sean I just fall even more in love then before. This is such an amazing ending to this trilogy and I couldn't be happier. Ella Frank mades this absolutely amazing trilogy and then Charlie David narration just makes it even better. I love his voices that he does and hope he makes me love this story even more. Amazing listen!

A great ending to the trilogy. I enjoyed how different this trilogy was and how the characters stood out. The narrator does a great job of bringing it to life.

I loved, loved, loved this series. This book was the wrap we needed for this couple and the side characters from another series. The solidity of love between these two men was a gift. There never was a waver even when it looked like a selfless gesture was coming on. I loved every word. Thank you Ella for another gift to be enjoyed again and again.

Once again Charlie David just knocks it out of the park with his narration of the final installment of the Prime Time series. He has done such an amazing job bringing Sean and Xander to life for me! I know I had a huge smile on my face while I listened to this! Charlie David really brought the emotions of this story to the surface. What an emotional ride in Sean and Xander finding their HEA. I hurt for both men, as well as Bailey, as they tried to navigate Bailey finding out about their relationship. There was so many hurt feelings between these men. I loved how Henri helped bridge the gap of forgiveness between Sean, Bailey and Xander. Seeing Henri and Sean close old wounds and forge a bond with each other was great. In the end, I loved how Sean and Xander’s relationship unfolded. They faced some tough challenges along the way, and neither man shied away from their feelings. Sean owned his sexuality and his newfound feelings for a man, and dared anyone to question the feelings he had for Xander. Sean and Xander finding their HEA was something special. I couldn’t have picked a better way for it to have unfolded. Ella has once again done a wonderful job at bringing us some equally amazing men. I’ve loved living in her world she’s created for us readers. I absolutely loved this series, and I’m sad to see it end, however I know it’s one I will revisit!