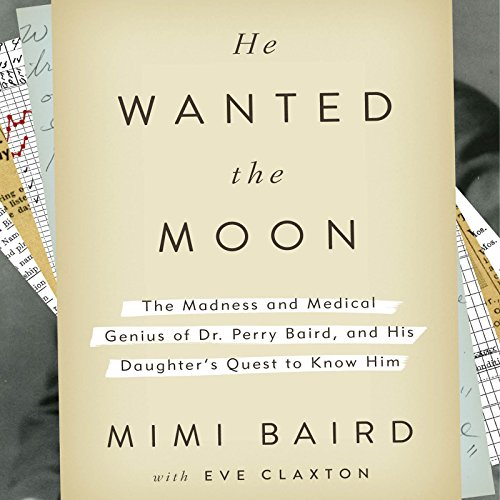 He Wanted the Moon

He Wanted the Moon

A mid-century doctor's raw, unvarnished account of his own descent into madness, and his daughter's attempt to piece his life back together and make sense of her own.

Texas-born and Harvard-educated, Dr. Perry Baird was a rising medical star in the late 1920s and 1930s. Early in his career, ahead of his time, he grew fascinated with identifying the biochemical root of manic depression, just as he began to suffer from it himself. By the time the results of his groundbreaking experiments were published, Dr. Baird had been institutionalized multiple times, his medical license revoked, and his wife and daughters estranged. He later received a lobotomy and died from a consequent seizure, his research incomplete, his achievements unrecognized.

Mimi Baird grew up never fully knowing this story, as her family went silent about the father who had been absent for most of her childhood. Decades later, a string of extraordinary coincidences led to the recovery of a manuscript which Dr. Baird had worked on throughout his brutal institutionalization, confinement, and escape. This remarkable document, reflecting periods of both manic exhilaration and clear-headed health, presents a startling portrait of a man who was a uniquely astute observer of his own condition, struggling with a disease for which there was no cure, racing against time to unlock the key to treatment before his illness became impossible to manage.

Fifty years after being told her father would forever be "ill" and "away", Mimi Baird set off on a quest to piece together the memoir and the man. In time her fingers became stained with the lead of the pencil he had used to write his manuscript, as she devoted herself to understanding who he was, why he disappeared, and what legacy she had inherited.

" He Wanted the Moon is one of the most disturbing and profoundly moving books I've read in years, and one of the great father-daughter books of our time. It will take its place as a classic in the literature of breakdown, alongside Kay Redfield Jamison's An Unquiet Mind and William Styron's Darkness Visible. The brilliant Dr. Perry Baird's memoir lets you see up close what it is like to go through the most manic phases of bipolar disorder - it is a nightmare, but this book is a damn wonder. Through it, Mimi Baird has finally given her father the credit he was due." (Pat Conroy, author of The Prince of Tides and Death of Santini
"Powerful, fascinating, and completely unique. This heartbreaking book is a one-of-a-kind first person window into the world of psychiatric illness before the era of drug therapies in this country. Reading He Wanted the Moon is a bit like discovering the Dead Sea Scrolls - it is one of the most eloquent, powerful, and important accounts of mental illness ever put to paper." (David Isay, founder of StoryCorps and author of Listening Is An Act of Love and Ties that Bind)
"Thanks to a daughter's brave determination to excavate her absentee father's life, we are gifted with deep personal insight into a brilliant but sick mind that could have been lost forever. This is a truly important book - a devastatingly honest account of mental illness that provides personal insight into long-ranging travesties of psychiatric care in the U.S. Unforgettable." (Susannah Cahalan, author of Brain on Fire)

One of the top memoirs I've read this year.

The author brought life to scenes as if I were watching a play.

Narrators brought so much life to a story begging to be told. So heartfelt and real to the end.