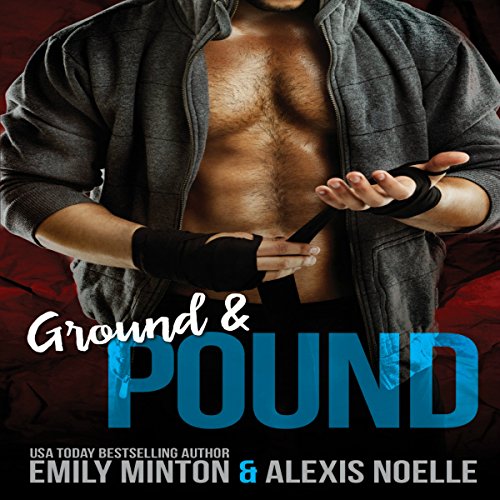 By: Emily Minton,Alexis Noelle
Narrated by: Logan McAllister
Try for £0.00

Kane Travis is one of the most successful fighters in the UFC. His name is known worldwide. Men want to be him, and women just want him. All Kane wants is the heavyweight title. Nothing else matters to him, not until he sees Emmy twirling around a pole.

Kane has one rule: Never give anyone else control. He doesn't let anyone in, especially women. The night he meets Emmy, he knows she is more dangerous than any opponent he has ever fought.

Emmy Sanders will do anything to care for her younger brother, even taking her clothes off at a seedy strip club. Ever since their parents' deaths, she has been the sole provider for them both. All Emmy wants is to get her brother through college. Nothing else matters to her, until she sees Kane sitting at the end of the stage.

Emmy has to have control over every aspect of her life. There is a time and place for everything, and she never wavers from her plan. The night she meets Kane, she knows he is more dangerous than anyone she has ever met.

Adult content not suitable for those under the age of 18, including but not limited to: sexual situations, foul language, and violence.

What listeners say about Ground & Pound

I'm a big fan of MMA books and being a fan of Emily and Alexis, I knew this would be a must listen for me.

Kane and Emmy have amazing chemistry and fit together perfectly. Neither of them has had an easy past and are both broken in different ways.

Logan McAllister did a great job at narrating, but probably would of benefitted from having a female narrator for Emmy's POV.

I has just listened to three books in the erotica section narrated by Logan McAllister and He is quickly becoming a favorite of mine.The man has a voice that will leave you begging for more .He did a great job with Ground & Pound. It's a difficult task to create a complex world in under 5 hours but together Emily Minton , Alexis Noelle and Logan McAllister accomplished just that.Kane Travis and Emmy have such a sweet but raunchy love story it was extremely satisfying.Its a short book so I don't want to say too much in case I accidentally let a spoiler loose.I see another review that hopes that two of the characters here, who I'm sure you will adore, will both be featured in their own audio tales .I 100% agree and hope this happens for both Emmy and Kane's brothers I'd certainly check hem out !The was romance. The wowza kind. The slow-burning kind. The tension off the charts kind. One ship is sailing fast, folks, and it is steamy and romantic and snarky and just wonderful to sink your teeth in to.The point of view alternates between Emmy and Kane, two very different characters, yet with their fates intertwined. It's no easy feat to master two distinct voices, but the authors and narrator managed it effortlessly, spinning the tale in such a way that never once felt redundant even though the chronology overlapped in places. This way, the intensity only amplifies and implicitly keeps you glued to the pages.I was voluntarily provided this free review copy audiobook by the author, narrator, or publisher.I received this title for free in exchange for an unbiased review.As always this is my honest opinion .The romance was so intriguing and all the upsides downs and twists the narration had, make this book a favorite already.

I think that this is a touching love story and Kane and Emmy both damaged by their childhood are perfect for each other. There are some very exciting scenes both violent and emotional. I have to praise Logan for his narration of the boxing scene I thought he made it riveting. This is a really good story though I think the sex could have been toned down a bit. But that is just my personal opinion.

This audiobook was given to me for a honest unbiased review. This was a good story. I love UFC Fighter romances any way, but this one was pretty good. Well rounded in the emotional ring, would laugh and cry through out the story.

I was gifted this book in exchange for an honest review.

Enjoyable enough listen. World building and writing skill was upper grade. The storyline was common but well told and used a lot of cliche and unrealistic situations. Even with that, the romance was sweet with a HEA.

Logan McAllister has a wonderfully sexy voice. He does a good female but he only uses it for the quotes, not the perspectives. I occasionally was mixed up as to who's head I was in :)

ONE BIG THUMB UP.

This was a really good book about Kane, a successful fighter and Emma, who is taking care of her younger brother. They meet when Emma is working on a pole at a strip club and their relationship begins there. I love that this book has no cheating. Logan McAllister did a good job with the narration. I received this free copy audiobook at my request and have voluntarily left this review.

I got this book via audiobook boom. The beginning really was not my cup of tea but these things happen in life all of the time. I am glad I kept listening because Kane and his baby brother came out on the other side of that horror. The story is fast-paced and well developed after that. The narrator was perfect for the story and did justice to each voice. I am glad for the HEA as well. The story is worth a listen if you can get past the beginning violence. Loved how Kane took on his lady love's little brother and helped him so he could finish college. Ths story is less than six hours and is a good rainy day weekend listen.

Would you try another book from Emily Minton and Alexis Noelle and/or Logan McAllister?

Yes. This was my first book from these authors and the story was pretty good.

Was Ground & Pound worth the listening time?

I think it was. I listened to it in about one siting and I was invested in the story. If you dont mind dual pov with one narrator, I think you should check this one out.

Wow... what a cute little MMA love story. Kane was an up and coming MMA fighter who decided to pop into a strip club with his younger brother, and what do you know... sweet little Emmy was straddling that pole to perfection... So cute...

The beginning of this book may be hard for some if you have had to deal with domestic violence... that was not a pretty scene...book it brought the book to life in a way... made the characters seem more real... they went through some stuff...

Nice love story between Emmy and Kane... ended was good... I hope Emmy's brother and Kane's brother each get their own book...

Narration: Let me just say... I HATE DUAL NARRATION... unless the girl reads the girl parts and the guy reads the guy parts... If not... what is the point... Both of the narrators could have pull this book off by themselves...


This is a good credit or sale book... although it is not too expensive so maybe even a buy...

Ground & Pound sucked me in right from the very beginning and kept me on the edge of my seat all the way to the end. This is the dark and dangerous story of Emmy and Kane. Kane is a cocky, yet protective, MMA fighter who sets his sights on Emmy, a feisty, yet guarded, stripper he meets in a seedy strip club. Their chemistry is off the charts and their story is hot and steamy. Logan McAllister did a great job bringing this story to life.
#AudiobooksUnleashedReviewer

Kane and Emmy were great together. Hot sex scenes, my kindle got steamy when the two got together. I loved Kane's alpha side. There need to be a book on Trey and Ozzy. Narrators did a good job.

Would you listen to Ground & Pound again? Why?

Yes, the story is full of amazing one liners, and funny moments

What does Logan McAllister bring to the story that you wouldn’t experience if you just read the book?

He has a lot of skills that make the story come alive, adds a bit more charm and sexuality to the plot.

Nothing really moved me, but I did enjoy the story a lot.

I love a good romance, and this one has a lot of fun the give and take. So much attitude is a plus. I really like how strong "M" is when it comes to how she handles the men in her life, and her brother is so sweet.
I was given this free copy, in return for my unbiased review