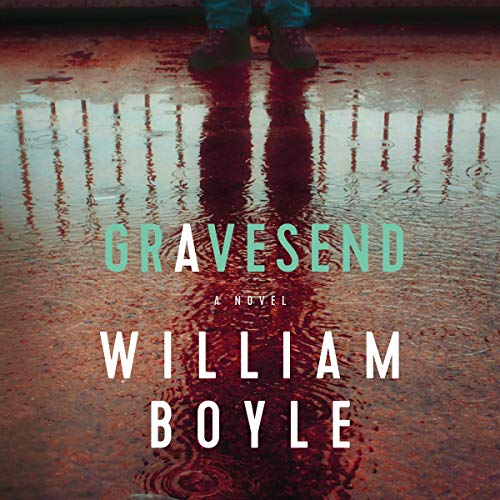 In this masterful work of neo-noir, William Boyle expertly captures the grit and desperation of a neighborhood in flux, and spotlights the neighbors who find themselves caught up in the crimes of the past.

Some worship him and some want him dead, but either way, tensions run high when “Ray Boy” Calabrese is released from prison. It’s been 16 years since Ray Boy’s actions led to the death of a young man. The victim's brother, Conway D'Innocenzio, is a 29-year-old Brooklynite wasting away at a local Rite Aid, stuck in the past and drawn into a darker side of himself when he hears of Ray Boy’s freedom. But even with the perfect plan in place, Conway can’t bring himself to take the ultimate revenge on Ray Boy, which sends him into a spiral of self-loathing and soul-searching.

Meanwhile, Alessandra, a failed actress, returns to her native Gravesend after the death of her cancer-stricken mother, torn between the desperate need to escape back to Los Angeles as quickly as possible and the ease with which she could sink back into neighborhood life. Alessandra and Conway are walking eerily similar paths - staring down the rest of their lives, caring for their aging fathers, lost in the youths they squandered - and each must decide what comes next.

In the tradition of American noir authors like Dennis Lehane and James Ellroy, William Boyle’s Gravesend brings the titular neighborhood to life in this story of revenge, desperation, and escape.

A wonderful novel made even better in audio

After being blown away by William Boyle’s upcoming release, A Friend Is A Gift You Give Yourself, I was compelled to read his other work so I went back to where it all began, admittedly with trepidation, fearing it wouldn’t live up to that screwball noir masterpiece. Whilst Gravesend has a very different tone, pace and feel, it definitely doesn’t disappoint and I can fully understand why it was met with such accolades on its original release.

Gravesend is told from a third person multi-viewpoint and we are first introduced to Conway D’Innocenzio. Conway is taking shooting lessons with his friend McKenna in preparation for the release of Ray Boy Calabrese who has served 16 years in prison for his part in the events leading to the death of Conway’s brother Duncan. Conway has a pent up anger which has burned within him for the years Ray Boy has been in prison and Conway plans to exact revenge. When he tracks down Ray Boy at his old family home, he is met by a broken man, a shadow of the cocky young man full of ego who had gone to prison all those years ago. Here’s where Conway’s inner battle begins, a need to do his brother’s memory justice fighting a mind and body who resists.

Next we meet Alessandra who returns to Gravesend from Los Angeles to look after her father following the death of her mother. She arrives back following her failed attempts to reach the big time as an actress to find her home town hasn’t moved on since she left. Alessandra has few friends left in town but needs a drink so seeks out an old acquaintance, Stephanie, who has lived a sheltered life to that point. Alessandra takes Stephanie out to a local dive bar and drinks too much, Stephanie remaining sober as her whole life has been to that point. Stephanie quickly idolises Alessandra and perceives her as a sophisticated soul for having moved away. Stephanie works with Conway who has always held a torch for Alessandra but Alessandra has her sights set on Ray Boy despite his past. The relationship between Alessandra and Stephanie begins on an uneven level but as events develop so does their relationship and I found this a really strong part of the story.

Eugene is Ray Boy’s angry young nephew who hates everyone and everything in a Holden Caulfield inspired way. Eugene sees the old Ray Boy and wants to be his protégés, with dreams of a gangster lifestyle but when things don’t develop the way he had hoped, he attempts to invent himself, desperate to be taken seriously.

One of the main characters in this story is the town of Gravesend itself. With its dark underbelly, it holds on to people and draws back those who have left. I really felt a sense of place as a result of Boyle’s masterful prose which let the town tell a story of its own without over indulgence.

The pace of the book smoulders, allowing the characters to develop and build with the story then speeds up once each of them has made their mark, culminating in a fantastic final few chapters. I found myself deeply drawn into the characters and each are fascinating. I particularly liked the way Eugene developed and Alessandra, like many of Boyle’s characters, has the potential for a future stand alone plot line of her own.

Gravesend is a dark and gritty novel which delves deep into the soul, examining the spiralling nature of revenge, anger and excess. I wholeheartedly recommend it to all literary crime fans.

This kind of book is one of those few, special stories where the writing style and the plot are both incredible and it all works perfectly.

This story was not my 'cup of tea'.It was well written and engaging with interesting characters.I feel a younger crowd,probably mle,would enjoy it. Alan Carlson was a fine narrator. I was given this free review copy audiobook at my request and have voluntarily left this review.

Sad story of revenge and regret. I found it to be very emotional and sad. To focus so completely on something very negative... To want something so bad that it takes over your whole life and everyone else watches your life pass you by. Two characters consumed by different ends of the same situation. I couldn't listen to this again. It was too sad. I was voluntarily provided this review copy audiobook at no charge by the author, publisher and/or narrator.

It will appeal to young male readers

Conway swears to kill Roy Boy after he is been released out of prison after. Sixteen years before, Roy Boy killed Conway’s little brother, and surprisingly, and not only he repents but also has a deathwish that will make Conway incapable of killing him. Both start a downward spiraling journey that will affect everybody in the neighborhood.

I really liked the premises of this book, and the raw writing gripped my attention, but I think I would have enjoyed it a lot more if I were ten years younger and male. Most of the characters were young men with little aspirations in life and the wrong motivations. They were complex characters, and although I was not able to connect to them, I understand the appeal for some readers. I was disappointed at the poor development and inferiority of female characters, but I believe it is due to the masculinity reigning in the neighborhood, and the fact that the book was written by a man.

Alex Carlson did a wonderful job interpreting the characters and transmitting the vibes of the atmosphere created by Boyle. His New York accents just hit the right spot. I only have a small complaint about his interpretation of both main female characters, which sounded a bit forced. They were not the most brilliant characters in the book, but Carlson’s interpretation made them sound even inferior to how they were portrayed.

It was an okay book for me, but I think it will appeal to young male readers.

This was gritty as hell, watching broken people maneuver around each other trying to make a life worth living. Everything is really bleak and depressing but really well written at the same time. And in the interactions with people who aren't as broken you can see a real dichotomy. Where there are people who just exist within their orbit briefly and move on with their lives while the broken people are stuck in a spiraling cloud they can't escape. For a story like that to be good the characters have to be good. They're tortured but they have to be enough to carry the weight of the story along. These do, these sometimes lost, sometimes loathsome individuals are developed strong enough that you can hate all of them and yet be a willing audience as they march along to the end of either them or their story.

It's a bummer, some of it might be upsetting, but I was there for all of it and it was quite entertaining.

I received the review code for this audiobook at my request and am voluntarily leaving this honest review.

I'm West of the Hudson

This is a New York story so if you live in New York or have spent time in New York, this is the book for you. But being one of those oddballs stuck out in the hinterlands of the Midwest, there were just way too many New York references for me to understand and followed. Places, intersections, bars, restaurants were all specifically mentioned and meant absolutely nothing to me. I was lost most of the time. Boyle also jumps around from storyline to storyline with great rapidity so it, for me, was hard to tell which person, time, or place we were at.

Alan Carlson did a good job of the voice characterizations especially the New York accents but this one was lost on my staid old Midwest sensibilities.

I haven’t had a bunch of time to sit down and read lately and it has been bumming me out. Thankfully I have had a lot of windshield time and have been listening to a lot of good audio books. When this one popped up for review from the narrator Alan Carson, I jumped all over it.

Glad I did, because I dug everything about it.

Written well with well-drawn characters and a smooth rolling plot line. The narration flowed and Alan’s cadence didn’t miss a beat. An all-around a great effort and a very enjoyable work.