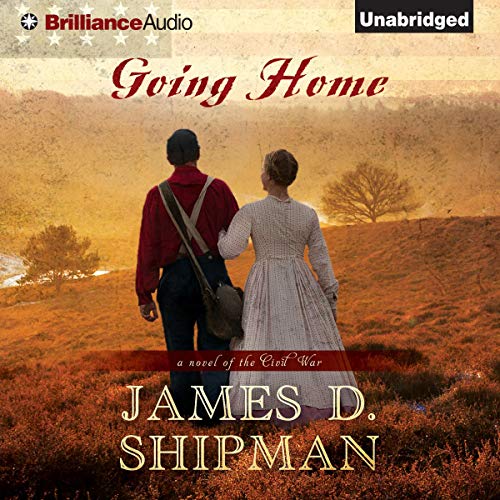 By: James D. Shipman
Narrated by: David deVries
Try for £0.00

Brought to the New World from Ireland, young Joseph Forsyth is soon betrayed by his alcoholic father and separated from his beloved family. As he grows older, he finds his kind nature exploited by others - including an alluring young woman named Lucy - until he gets swept away by the conflict that divides a nation.

After the bloody siege of Petersburg, Joseph floats in and out of consciousness at a Union army hospital. Keeping vigil at his side is Rebecca Walker, a nurse and widow all too familiar with the horrors of war. As Joseph fights for his life and Rebecca struggles to follow her heart, both face a devastating choice: whether to hang on to the wounds of the past or move on to an uncertain future.

From the fields of Ireland to the metropolis of Quebec to the battlefields of Virginia, Going Home follows one man's quest for his place in a world still healing from the wreckage of war.

What listeners say about Going Home

I really enjoyed the story and the reader was very good. Just plain
enjoyable entertainment.

The book is all right, but the narrator had the same problem that many male narrators do with females voices - they're high-pitched, whiny, and terribly grating on the ears.

A rollercoaster ride. I couldn't put it down.

I had the privilege of reading the book first. When it came to audible I jumped on it. The narrator was excellent. James is a great story teller. If you enjoy historical fiction this is one you should invest in. You will consider the life of Joseph days and weeks after you finish it.

Struggled in the beginning but stuck with it and enjoyed the storyline. The tenacity of Joseph and his desire for family were amazing!

I'm so excited I found this author. James D. Shipman combines my love of history and romance into a great story or trial and triumph. I'm new to audible and the world of listening to books being narrated and this narrator is both captivating and easy to listen to. I'm seeking out all of Mr. Shipman's books on audible - I've listened to 2 already :-)

I would have liked at the end for it to be addressed how the main character had such knowledge of the nurse and the doctor.....otherwise, wonderful story.

Loved it! Not a fan of period books, this book kept my interest the entire time!

At times this page turner seemed too exciting to be true; however, knowing that there was historical fact behind it made it even more fascinating. Good job, James Shipman!

It took me a while to listen to the book because it starts with the description of a battle, which is not appealing to me. Once you pass the first few minutes and dive into the story, it's a captivating argument about character and life.

interesting book. I did not really think I would enjoy it but I did glad I decided to finish it