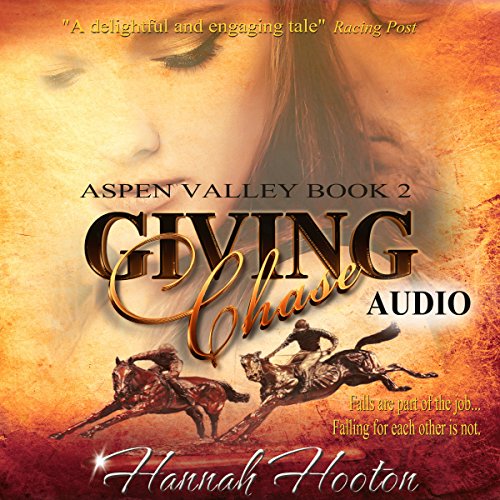 By: Hannah Hooton
Narrated by: Elan O'Connor
Try for £0.00

Warning: To keep it real, some characters in this audiobook use colourful language and engage in sex scenes which some listeners might find offensive.

There has only ever been one man in Frankie's life: her father, Doug Cooper. That is, until she takes the job of amateur jockey at Aspen Valley Racing Stables. Here, in the rolling countryside of southwest England, she crosses paths with star rider, Rhys Bradford. Her crush on him would be made so much simpler if they didn't both have their hearts set on the same prize: the coveted ride on Grand National favourite, Peace Offering.

In the turbulent run-up to National Hunt's biggest event, questions are raised. What exactly does Doug have against the Bradfords? Is Rhys playing games with her heart? Will Ta' Qali show his true potential in time to warrant his place at Aspen Valley? Why do there have to be so many blasted calories in strawberry cheesecake? And lastly, who exactly is Francesca Cooper?

Frankie's curiosity unearths some long-buried secrets which their keepers would rather remain buried, and on a journey of self-discovery that takes in Britain's fiercest steeplechase courses, love will prove her costliest stumbling point.

"...reminiscent of a Tom Sharpe novel but funnier. An engaging romance and a joy to read." (Racing Post)
"A pleasure to turn the pages of this relaxing yet intriguing novel. This book's a winner!" (Equine Trade News)
"For all you girls who love your racing, this book should be on your list of things to read. A female leading lady, horse racing, intrigue, and even a bit of romance! What more could a girl ask for?" (Racing4Girls)

What listeners say about Giving Chase

This was a really interesting story. I wasn't sure I was going to enjoy this read. I was really on the fence. But, I ended up pleasantly surprised. It was a bit long and tended to meander at times, YET I didn't mind.

The relationship between Rys and Frankie developed slowly. But, it wasn't too slow. The whole story kind of flowed organically. I thought Doug was a bit gruff and at times a jerk. There were definitely a lot of jerky moments for several characters. Ms. Hooton did a good job of making everyone human, and show their good and bad sides. Frankie at times was naive and made questionable decisions, but that wasn't a detraction. It was something that anyone can see in the people around them that make them human. There are a lot of things I could say about which characters irritated me, made me mad, etc. HOWEVER, these are not things that would be negatives about the book. It speaks to Ms. Hooton's ability to draw you in and make you care enough to go through a few emotions about the characters as you follow them through the journey to the end of the story. And, there were a lot of funny and sweet moments of the book that I loved.

This was a racing story and I thought that the romance and other human dynamics that developed around the racing element of the story is what made it work so well. It didn't just feel like a typical romance, but like following the story of the lives of the characters for this specific period of time.

Overall a wonderful listen. I thought the narrator, Elan O'Connor was really great. She has this wonderful quirkiness. And, some of the voices she did would probably not have gone as well without her charming accent. But, somehow, the accent and Elan's performance gave them so much character and life. I loved her Rys and Frankie voice. Overall just a great job.

Lived the story. As a rider I "experienced" the book. One of the best I've read. Hope there are more coming.

Narration - Elan O'Connor - simply fabulous. Her males are believable, and she really has a variety of character voices. Read with a British accent, so, you pretty much had me at "Chapter One..."
I loved her little kids and really enjoyed the personalities she portrayed for Frankie and Rhys. Especially Frankie... there was actually a lot of subtle humor and adorable inflections to Frankie's character that made me really fall in love with her. Such a nice job, she's popped into my favorite narrators list.

The story, I loved. This is such a different story than anything I've ever read before. There are a lot of details about the races and as I was listening, I could really envision what was happening even though I really don't know much about this type of horse racing/jumping. I felt anxiety, and really got nervous at times worrying about what was going to happen. (needless to say, it really had me drawn in)

The love story between Frankie and Rhys started with typical animosity, but this baby had a REALLY good reason for all the animosity, and I enjoyed all the twists and turns that the plot took with secondary characters.

My initial concerns were that this is book 2 and it was up next, but I hadn't read book 1. I seriously considered holding off on this and reading the first one, but honestly I was fine. I know that Pippa and Jacks's story were told in book one so I now have some giant spoilers for that book, but I will totally go back and read it. The first book is also not available in audio at this time, but again, not a problem for me. Loved it, wasn't lost for a minute.

My other concern was the fact that I'm a 5'11" woman, so I was a little curious as to how I was going to be attracted to, or become invested in the male characters when I kept envisioning 5'2" Victor Espinoza (the funny little jockey that was on Dancing With the Stars). That just wasn't working for me (in my head)!!! Turns out Ryhs is 5'10 when he stands on his left leg and 5'11" on the right (or visa-versa lol) so it still worked for me.

I felt like it went pretty quickly once they got over the animosity and it was a little insta-lovey, but I really enjoyed their interactions and the end??? *sighs, then melts into a big ole puddle* Just sweet and romantic and I ate up every minute of it!

I received a copy of this audiobook free of charge from audiobookblast in exchange for an unbiased review.

Giving Chase is about Frankie Cooper and Rhys Bradford wanting to win the Grand National Steeple Race. Each of them has their own reason until Frankie, an amateur jockey, became the jockey for the Grand National favorite horse, Peace Offering instead of Rhys, star jockey.

Frankie was newly hired as an amateur jockey to Aspen Valley. When Frankie was handed to ride Peace Offering at the National, Rhys wanted nothing to do with Frankie. Being the favorite star jockey, Rhys is humiliated publicly when the newspaper caught the story unofficially.

Frankie has a secret crush on Rhys for such a long time. So when her friends dared Frankie to dance with Rhys, their relationship shifted. As Frankie began to know Rhys, she is discovering the dark secrets her family has been hiding from her. Frankie has never knew why her father hated Rhys' father so much.

Rhys also hated his father and also need to prove that he is not like his father. Every time that Frankie asked, Rhys withdrew from her.

As the National grew closer, Frankie also have to face major decision of what she wants: to win the National because she wanted to or to prove something to her father.

Giving Chase has everything: romance, family feud, secrets that are refusing to stay buried, discovering what ones want in life, and a lesson about the Steeple Racing. Readers/Listeners are going to enjoy this romance story. This story has a lot going on but it is well told. However, as a fair warning to readers/listeners who don't do peppy very well, Pepper is the only preppy character. She is way too cheerful as a character.

The narrator, Elan O'Connor is a wonderful voice to listen to. I love the voices for Frankie and Rhys. I love that British accent in this story which is perfect since the Grand National Steeple Race is held in England annually just like the Triple Crown Stakes is held in the U.S.

I was given this audiobook by author/narrator/publisher via Audiobook Blast in exchange of an honest review. I was not compensated or influenced in any way for writing this review.

If you could sum up Giving Chase in three words, what would they be?

What other book might you compare Giving Chase to and why?

I do not think I have read anything like Giving Chase. It was very interesting how there is politics in every job.

The final race was my favorite scene. Had all the excitement of being at the race track.

No, I enjoyed listening to it as time allowed me to. Easy to get back into after being away from it for a few hours or even after a night of sleeping.

You will route for the couple and the horses!

What a wondeful listen. First off, I was a little concerned that this is the second in the series and I would not have enough background to follow along, but this read fine as a stand alone novel. I love race horse books, and this one drew me into the lives of the people involved. Frankie, a female jockey trying to fit in a man's world brought us into her family, her love life and her Girl Guides. Love that there was more to her than just riding a horse and falling in love with Rhys. It gave her depth and made her character very believable. Definitely wanted to smack her father a couple of times for his attitude, but ithis secondary story added a whole new dimension to the book. Rhys proved to be a worthy hero . There were times I questioned his motives, but always wanted to give him the benefit of the doubt. The back story of Tom and Frankie, Pippa and Jack , and June all brought additional facets making you feel like you were part of the story and kept me listening.had to keep routing for the horses too! So much to take in and I just had to keep my earbuds on to finish!

Élan O'Connor portrayed the characters in this book beautifully. She brought the story to life. A narrator can make or break a book and she is one I will search out to listen to.

--I was given a copy of this book in return for an honest review.

"I was provided this audiobook at no charge by the author, publisher and/or narrator in exchange for an unbiased review via AudiobookBlast dot com"