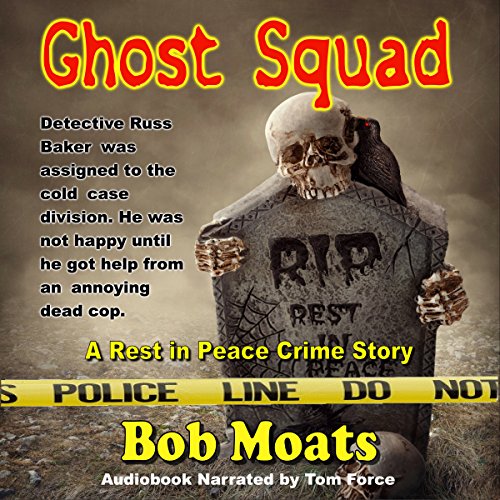 Detroit homicide detective Russ Baker has been sent to work the Cold Case Division due to a screwup he committed on a case. He was all alone in the basement office until he was visited by an unlikely partner. A dead former detective who was now an annoying ghost. Would the ghost help him solve the cold cases, allowing the murdered victims to go on to the hereafter?

Russ and his ghost partner solve a few cases, bringing him to the attention of the brass, and he is given a chance to make good by solving a serial murder case. Together Russ and his ghost finally track down the killer in a surprising confrontation.

Murder, mayhem, humor, ghosts galore, sexy women, and lots of fun are in store in this paranormal ghost crime story by Bob Moats. This audiobook is a novella.

There’s a lot to like about this audiobook but it has its issues too.

The Good:
- It’s an interesting story
- The narrator does a good job

The Bad:
- Two-dimensional characters
- All issues are very easily solved
- The main character knows the ghost is doing/allowing bad things to happen and just chooses to shrug it off rather than act or challenge these incidents
- Unrealistic police procedure (no, not that). I don’t want to give spoilers but I’m pretty sure police can’t just shoot unarmed people who run at them

I enjoyed the story, but will I be seeking out more Ghost Squad adventures? Nope

I had such a good time reading this book. Liked the characters and the ghosts.

I tried to give it a one, but my iPod wouldn't let me. Shame on the publisher for not helping out a young writer, instead making him go though public reviews. To the authour. Good idea.