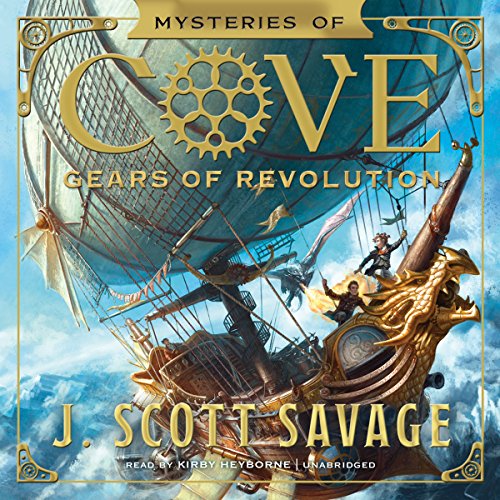 After finding a compass and clues left by Kallista's father, Leo Babbage, Trenton and Kallista head west aboard their homemade mechanical dragon to search for the missing inventor. The two teenagers hope to find answers about their mountain city of Cove, but instead, they find only a blackened forest, ruined buildings, and a small underground city.

Almost immediately, Trenton and Kallista get caught up in a civil war between a clan of scavengers called Whipjacks and the Order of the Beast - people who believe that dragons are immortal and divine.

Stranded in a new city, the two friends meet Plucky, a Whipjack girl with mechanical legs, and Ander, a young member of the Order who claims humans are able to communicate with dragons. Can they trust anyone, or have they unknowingly stepped into a trap?

What listeners say about Gears of Revolution

Sheesh I am really tearing through this book series, to the point that I'm preparing myself to be sad for when it ends. I love the characters, the plot, the colorful world, the interesting inventions, and the reader.

The book is a good listen. But the narrator no matter how skilled he is at different voices is poor because the volume SUCKS! I had to turn the volume to full when he artistically whispered then back to 3/4 when he yelled. It hurt my ears ( I work in a place where the sound is at 80dB) And there where parts of the book that got missed due to the constant up and down, I couldn’t stop to change the volume.... The only way I got threw this was imagining hitting him in the nuts each time he did it. Which turned out to be 20 time + an hour.

Love Kirby. These books so far are very interesting. Mixing post apocalypse with dragons and 20th century prewar culture is new for me. Ive been hooked though. Cant wait for the next installment

I loved the 1st book in this series, the 2nd book does not disappoint. I can't wait to listen to the 3rd book. So glad that these were included in my subscription.

Also I love listening to anything that Kirby Heyborn reads.

I hope for more. I like depth & complexity, enjoyd

The problem the story is utterly forgettable, It should not be that way. The book did get much better as time went on but took too long to get there.

Overall, I have enjoyed this series and will buy the third novel. Physics take a back seat, but that is expected from a steampunk/fantasy. The characters can be infuriatingly dense, but they are teenagers. The one thing that really rubs me the wrong way is how the reader pronounces turbine as turban. With most novels, a mispronunciation is a rare occurrence and no big deal, but to mispronounce a word that is used dozens of times throughout the series grates on the nerves after a while.

ABSOLUTELY Awesome sequel, which is hard to successfully accomplish after such a stellar first book!!! Amazed at the intricacies and balance of the story!! Couldn't turn it off,,,,, listened to it all in one day, and unfortunately didn't get all of my chores done. ......I think the author should put a warning on the label, "CAUTION!!! May Hinder Productivity, Listen at own Peril!!"

That one thing from the first book that I didn't like it's a bit more pronounced in this book. But it doesn't matter because the book is amazing!! I'm ready to start the third book now, I just wish I had more time to devote to just books!

It was a good idea but not the best writing.

1: My one big problem was the YELLING! The narrator would yell a lot of the exciting parts and it got really annoying.

2: My other problem was that it was to long. I felt like it went on and on, and the same stuff kept happening.

At the begging it was good and interesting but be prepared to feel bored by chapter 25. The narrator was good but it just didn’t cut the line.

I’m an adult so I’m not the target audience but this would be great for young girls and boys. I picked this series because I like Kirby Heybornes narrations