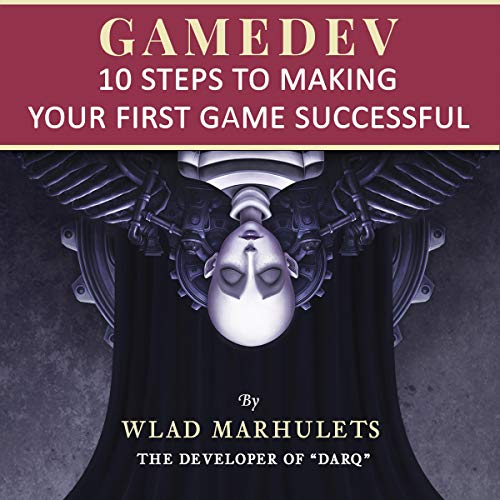 By: Wlad Marhulets
Narrated by: Yong Yea
Try for £0.00

If you know nothing about game development, you're basically me before I started working on my first game, DARQ. This book is for beginners and assumes no knowledge of game development on the listener's part.

As a first-time developer with no prior experience in coding, modeling, texturing, animation, game design, etc., I managed to launch DARQ to both commercial success and critical acclaim. With zero dollars spent on marketing, it was featured in major media outlets, such as IGN, Kotaku, PC Gamer, GameSpot, Forbes, and hundreds of others. DARQ won numerous awards, such as The Best Game of the MIX/PAX, and received a user rating of nine out of 10. DARQ was in the top 50 of the most wish-listed games on Steam before launch. It made it to the "Top Selling", "New and Popular", and "Featured and Recommended" tabs on Steam. Ultimately, DARQ became the number 42 Most Shared PC Video Game of 2019 (Metacritic).

In this book, I describe how I did it. If you're an aspiring developer wanting to make a living from making games, this book is for you.

The book guides you through a step-by-step process of making a commercial game. It teaches you how to learn all the necessary skills and covers various aspects of game development: mindset, preproduction, funding, business, law, development, marketing, PR, publishing, distribution, as well as pre-launch, launch, and post-launch strategies.

What listeners say about Gamedev

One of the best and most useful books I have read on game development.

Has provided me with lots of great advice and inspiration to persevere.

The bible of modern game development.

I wish I would have found this book sooner. I am in the middle of releasing my first indie virtual reality game, ROTU.com, and this book affirmed and helped align key areas of my marketing and deployment strategies.

Also, the author, Wlad, personally followed up with me after minutes of reaching out. You can trust a film composer turned game developer. Understanding how to write music for film instills a creative work ethic and determination that leads to success.

If you are at all interested in learning more about the intricacies of game development from the perspective of someone spearheading everything involved from conceptualizing to releasing a game this is the book for you.

The narrator is someone I've followed on YouTube for years. This is his first narration of a book to my knowledge and wow. Well done, very easy to understand and just the right volume to where I can hear it easily with background noise around. great book also. Haven't played his game, about to give it a shot later this week.

The author is very aware of the fact that luck had a lot to do with his success and that it was not all due to hard work.
Which is very refreshing.
However he does make it clear that luck usually materializes more often to those that work hard.
With the info in this book, the only thing between you and a at bare minimum a moderately successful game is you!
The author's story is also very inspiring and could probably warrant a book of its own.
The narrator also does a stellar job throughout the book with a few chuckle inducing French name pronunciations that don't deter from the material at all.

I thoroughly enjoyed this book and will revisit it many times while I develop my own games.

I was looking for a book to get a good overview of what it's like and how to create a video game, and I have to say I couldn't possibly be more satisfied with my purchase. The book covers all aspects, from technical to creative, from marketing and business, without ever feeling too long or too short. I feel like the title doesn't give it justice, so don't let it fool you, this book is the indie developer's Bible. Props to the narrator as well, very pleasant to listen to and spotless performance.

The best book for an aspiring indie developer

The tittle gives cheap feel to the book. Most the 10 steps to this or that books are nonsense - also here I didn't at any point think the content as a 10 step program. But luckily the book is much better than the tittle and totally worth the read.

I am a a solo-developer with some game company and entrepreneurial experience (and a decade+ long career in game related visual field). This book is really good for getting a relatively thorough coverage of things to consider when developing a game and in planning its marketing and general appeal strategy. Of course one book can't go very deep in any particular topic but I found just the marketing part to be more valuable than several (admittedly terrible) social media marketing books I have gone through lately.
The book has a lot of information about choices you need to make for your game but it doesn't make them for you. Also the parts about pacing your work, legal considerations etc. raise topics that easily get ignored.

My review doesn't quite do justice, the book really is great.

10\10 would be my favorite book to listen

10\10 would be my favorite book to listen. Yong is great and Wlad is awesome,nothing to say more. Buy and listen!

I was apprehensive about picking up this book but reviews were good so I decided to try it. it started out a bit slow with some of the more generic advice you get for any large project undertaking, but it becomes more and more specific and detailed as it goes on and by the end I was elated at what a valuable resource it is, not to mention a great testament from a dev who's been through it. As an indie dev approaching the home stretch on an indie project I found chapters about marketing, finance, legal and even technical optimisation to be informative and truly valuable. Very good narration as well. Absolutely fantastic book - I can't recommend it highly enough. 5 stars all around.

Enjoyed from beginning to end

The author does 3 things that to me really stood out:
1. Stressed the hard-work required and doesn’t try to sugar-coat anything or provide any quick hacks to make a game.
2. Gives several examples of what he could have done differently in his process and the lessons learned.
3. Acknowledged in some cases how he was lucky, but was also very humble in discussing the hardships he faced growing up. It was very refreshing and personable.

This book was very informative and inspiring.

Highly informative, especially for the business and marketing sides of indie dev that many creative and development focused designers may struggle with.

great tips. really a roadmap for completing a game. I went and purchased a physical copy to reference whenever I need.