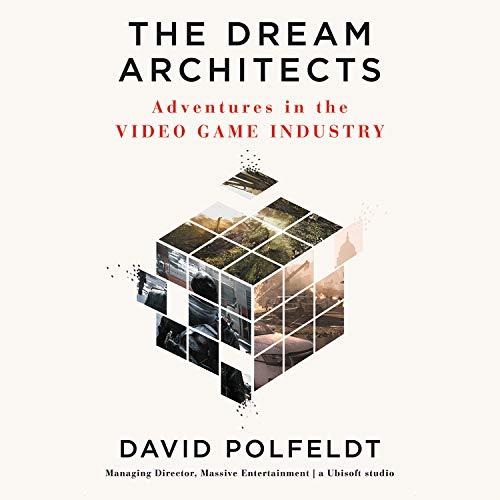 By: David Polfeldt
Narrated by: Matt Wolfe
Try for £0.00

The inside story of the booming video-game industry from the late 1990s to the present, as told by the managing director of Ubisoft's Massive Entertainment (The Division, Far Cry 3, Assassin's Creed: Revelations).

At Massive Entertainment, a Ubisoft studio, a key division of one of the largest, most influential companies in gaming, Managing Director Polfeldt has had a hand in some of the biggest video game franchises of today, from Assassin's Creed to Far Cry to Tom Clancy's The Division, the fastest-selling new series this generation that revitalized the Clancy brand in gaming.

In The Dream Architects, Polfeldt charts his course through a charmed, idiosyncratic career that began at the dawn of the Sony PlayStation and Microsoft Xbox era - from successfully pitching an Avatar game to James Cameron that will digitally create all of Pandora to enduring a weeklong survivalist camp in the Scandinavian forest to better understand the post-apocalyptic future of The Division.

Along the way, Polfeldt ruminates on how the video-game industry has grown and changed, how and when games became art, and the medium's expanding artistic and storytelling potential. He shares what it's like to manage a creative process that has ballooned from a low-six-figure expense with a team of a half-dozen people to a transatlantic production of 500 employees on a single project with a production budget of more than a hundred million dollars.

A rare firsthand account of the golden age of game development told in vivid detail, The Dream Architects is a seminal work about the biggest entertainment medium of today.

"Readers expecting a history of gaming will be pleased to discover this entertaining autobiography....A great storyteller, Polfeldt comes across as truthful and self-effacing...[He] is a dreamer indeed, and gamers are lucky to be invited into his creative worlds." (Booklist)

"In the film industry we would call David Polfeldt an auteur. Someone who possesses a as unique vision and also has multi-disciple skills to pull it off. This book showcases clearly David's uncanny ability to do just this. THE DREAM ARCHITECTS is a phenomenal, behind-the-scenes look into the making of today's video games. It both entertains and enlightens in equal measure." (Jon Landau, COO of Lightstorm Entertainment [Titanic, Avatar])

What listeners say about The Dream Architects

Listening to this book happened in the best possible time ever in my life.

You see, I'm a Game Producer myself, facing some of the most important and hard times (yet) of my still young career. Before listening to this book, I considered myself to be in a trial by fire, craving for answers, tips and mentorship. I considered myself to be in such a painful crossroad, made even more painful by the aching agony of this pandemic... But then here I was, listening to David's career path and story, going from one failure to the other, until reaching tremendous success, which, from the outside, looks just like glamour and delight, but from the backstage, it's pain redefined.

This book gave me so much more perspective on this career path, provided by the amazing storytelling that unveils David's experiences, trials and outcomes. Getting to know behind the scenes stories from industry veterans is golden to me, especially in such a complex and ever changing industry, where nothing is set in stone, at least not for long.

I'm still processing what I've been through while listening to this, but I can say that I'm forever grateful for my mistaken Google Home Mini, which replied to me "Looks like you don't have any audiobooks on your library, here's a 30 minute sample from The Dream Architects: Adventures in the Video Game Industry" when I've politely asked "Ok, Google. Read me news from the games industry". A casual matter of chance, an error, randomness at its finest, which I've embraced happily after the 30 minute sample, not trying to change the circumstances, but accepting it, like the old paratrooper lesson.

Its not so good.

Its ok but, I can feel a biased perspective. It feels fake especially at the end. All round brave superhero, who wears a mask of modesty. I have listened to many books and listening to this one was hard since I could not see whats wrong with it. I realized only at the end why I sensed that something is wrong! It feels fake and inaccurate...