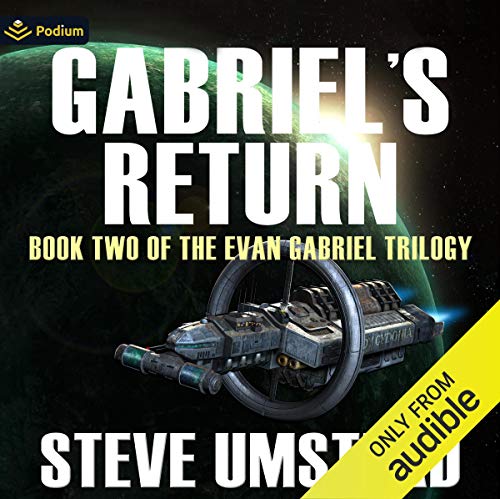 Voted Reviewer's Choice 2011 by The Kindle Book Review: "A Sci-Fi Rumble in the Jungle", Five Stars

Gabriel has always been haunted by his past. Now he must face his past once again. On the far-off icebound planet of Poliahu, North American Federation Navy Commander Evan Gabriel suffered the loss of several team members in order to free a native species and save his brother. Now he is being called away on a new mission by a friend in trouble, and by a name from his distant past. He and his surviving team must again travel across the galaxy, this time to the world where he lost his naval command, and his original team, so many years ago: Eden. Gabriel will face three distinct threats on Eden: the well-armed terrorist group that has been raiding Eden City, the deadly flora and fauna of the planet itself, and perhaps most ominously, his own haunting memories of his past. Gabriel's Return continues the epic science fiction adventure trilogy with characters new and old, advanced weapons and technology, devious political intrigue on the moon and Mars, and deadly jungle combat on the unique planet of Eden.

"The world building accomplished by the author is exceptional. The descriptions of the tactics and equipment used within the story line is spot on." (Amazon Reviewer)
"The action in this book rocks, complete with super-cool weapons and technology. Umstead takes a complex cast and gives them each a distinct personality that makes the team dynamic just great." (Amazon Reviewer)

What listeners say about Gabriel's Return

I loved books 0 and book 1 by Steve Umstead "Evan Gabriel Trilogy" but I am very disappointed in this book. I continued on listing over half way through this book just waiting for all the action and excitement to begin..... it just didn't and I've given up..... This instalment has ruined the entire trilogy for me. Sadly this story did not grab my interest let alone hold it, unlike the previous books. Ray Chase done another excellent job narrating though.

disappointing over all. it could have do much better. narrator is lucky he wasn't here in texas , i would have had yo shoot h in self defense. lol

Umstead is making me crazy!

I cannot believe that after all this time Evan Gabriel is being sent back to Eden of all places! Not only does he have to get past everything that happened there before, but now that he is back, it becoming the exact same nightmare it was before. Jimenes and Senate become pawns in the drama and Evan has to fight the enemy and his memories of former trip and his former team. Not to mention the cliffhanger at the end!!! I can't wait to see his revenge!!!.

Lots of twists and turns, I couldn't stop listening. Almost able to do it straight through.

This story is different from the last one but all of them have something that will come together in the end of the last book so pay attention to the characters names.

Now there is some really cool tech in here the suites they wear are like invisible suites and they use them really well, I want one of those.